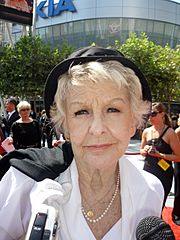 Elaine Stritch (February 2, 1925 – July 17, 2014) was an American actress and vocalist. She was known for her role as Colleen Donaghy in 30 Rock. Stritch was nominated for five Tony Awards. She won three Emmy Awards and two Drama Desk Awards.

Stritch was born on February 2, 1925 in Detroit, Michigan to an Irish-Welsh family. She studied at The New School in New York City. Stritch was married to John Bay from 1973 until his death in 1982. She lived in Birmingham, Michigan.

Stritch died at her home in Birmingham, Michigan from complications of stomach cancer and diabetes on July 17, 2014 at the age of 89.

All content from Kiddle encyclopedia articles (including the article images and facts) can be freely used under Attribution-ShareAlike license, unless stated otherwise. Cite this article:
Elaine Stritch Facts for Kids. Kiddle Encyclopedia.