What Every Woman Knows (play) facts for kids 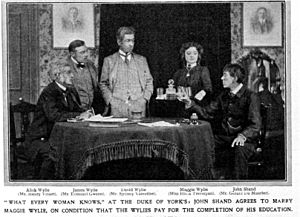 Original British production at the Duke of York's Theatre, 1908

What Every Woman Knows is a four-act play written by J. M. Barrie. It was first presented by impresario Charles Frohman at the Duke of York's Theatre in London on 3 September 1908. It ran for 384 performances, transferring to the Hicks Theatre between 21 December 1908 and 15 February 1909.

The play was first produced in America, also by Frohman, in 1908 at Atlantic City on 18 October 1908, transferring to Broadway, at the Empire Theatre in New York City in December 1908. The production starred Maude Adams and Richard Bennett.

Written before women's suffrage, the play posits that "every woman knows" she is the invisible power responsible for the successes of the men in her life.

The Wylies, a well-to-do but uneducated Scottish family, are concerned about their daughter, Maggie, a plain young woman who they fear, will remain a spinster. One night the Wylies discover that a serious young university student, John Shand, has been breaking into their home so that he can read books from their large library. Shand is penniless and cannot afford to buy books for his law school education. Maggie Wylie and John Shand come to an understanding: that her family will fund his education if, at the end of five years, he agrees to marry her.

John honours his commitment to Maggie, marrying her although he does not love her. Recognising her husband's ambition to become a Member of Parliament, Maggie quietly uses her intelligence and her connections behind the scenes to get John elected. She continues to foster his career, never allowing him to see that she is the power behind his rise to fame.

Eventually John begins to believe that his wife is too plain for a man of his stature and position, and he takes up with Lady Sybil Lazenby, a beautiful, refined and high-born young Englishwoman. Maggie is prepared to let her husband go, if Sybil can help him more than she herself can. However, when Shand is preparing a speech that will make or break his career, he finds that Sybil is no help to him, and he realises that Maggie is his inspiration.

All content from Kiddle encyclopedia articles (including the article images and facts) can be freely used under Attribution-ShareAlike license, unless stated otherwise. Cite this article:
What Every Woman Knows (play) Facts for Kids. Kiddle Encyclopedia.