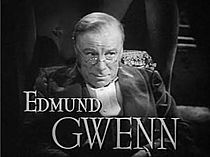 Edmund John Kellaway (September 26, 1877 – September 6, 1959) was an English movie, television, and stage actor who is known for his role as Santa Claus in Miracle on 34th Street. Gwenn won an Academy Award and two Golden Globe Awards.

Gwenn was born in Wandsworth, London, England on September 26, 1877. He studied at St. Olave's School and King's College London. Gwenn was married to Minnie Terry for one day in 1901. They divorced the same day they married. Gwenn died on September 6, 1959 from pneumonia cause by a stroke in his Woodland Hills, Los Angeles home, aged 81.

All content from Kiddle encyclopedia articles (including the article images and facts) can be freely used under Attribution-ShareAlike license, unless stated otherwise. Cite this article:
Edmund Gwenn Facts for Kids. Kiddle Encyclopedia.