Dame Frances Margaret Anderson, (10 February 1897 – 3 January 1992), known professionally as Judith Anderson, was an Australian-born British actress who had a successful career in stage, film and television. A prominent stage actress in her era, she won two Emmy Awards and a Tony Award and was also nominated for a Grammy Award and an Academy Award. She is considered one of the 20th-century's greatest classical stage actors.

She received two Emmy Awards and a Tony Award for her acting. Her Hollywood movies included the Academy Award-nominated movie Rebecca, Laura in 1944 and The Diary of a Chambermaid in 1946. Anderson was born in Adelaide, South Australia, although she later relocated to Santa Barbara, California. 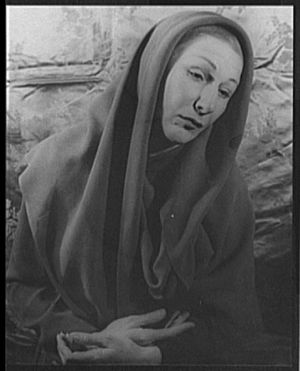 Judith attended a private school, Norwood, where her education ended before graduation. She began acting in Australia before moving to New York in 1918. Anderson established herself as a dramatic actress of note, making several appearances in Shakespearean plays.

By the early 1930s, she had established herself as one of the most prominent theatre actresses of her era and she was a major star on Broadway throughout the 1930s, 1940s and 1950s.

She maintained her birth name as her legal name, never legally taking the forename "Judith" as per the California Death Index registry.

Anderson loved Santa Barbara, California, and spent much of her life there. She died there, of pneumonia, in 1992, aged 94.

Anderson was created a Dame Commander of the Order of the British Empire (DBE) in 1960 and thereafter was often billed as "Dame Judith Anderson".

On 10 June 1991, in the Queen's Birthday Honours, she was appointed a Companion of the Order of Australia (AC), "in recognition of service to the performing arts".

All content from Kiddle encyclopedia articles (including the article images and facts) can be freely used under Attribution-ShareAlike license, unless stated otherwise. Cite this article:
Judith Anderson Facts for Kids. Kiddle Encyclopedia.