Kids Encyclopedia Facts
For the English actress who starred in Charlie and the Chocolate Factory, see Liz Smith (actress). 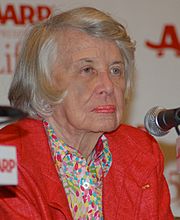 Mary Elizabeth "Liz" Smith (February 2, 1923 – November 12, 2017) was an American gossip columnist. She was known as The Grand Dame of Dish. She was a journalist for the New York Daily Times.

Smith was born on February 2, 1923 in Fort Worth, Texas. She was raised in New York City. Smith studied at the University of Texas at Austin. She worked for five years at CBS Radio with Mike Wallace. She was married to George Edward until they divorced.

Smith died at her Manhattan apartment on November 12, 2017 of natural causes at the age of 94.

All content from Kiddle encyclopedia articles (including the article images and facts) can be freely used under Attribution-ShareAlike license, unless stated otherwise. Cite this article:
Liz Smith (journalist) Facts for Kids. Kiddle Encyclopedia.