Jennifer Jones (born Phylis Lee Isley; March 2, 1919 – December 17, 2009), also known as Jennifer Jones Simon, was an American actress during Hollywood's golden years. Jones, who won the Academy Award for Best Actress for her performance in The Song of Bernadette (1943) on her birthday, was also Academy Award-nominated for her performances in four other films. She was married three times, most notably to film producer David O. Selznick.

Jones starred in more than 20 films over a 30-year career, but she went into semi-retirement following Selznick's death in 1965. In 1980, she founded the Jennifer Jones Simon Foundation for Mental Health and Education. In later life, Jones withdrew from public life to live in quiet retirement with her son and his family in Malibu, California. 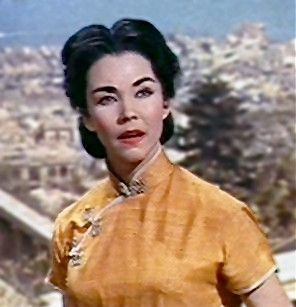 Love Is a Many-Splendored Thing 1955

Jones was born in Tulsa, Oklahoma. Her parents toured the Midwest in a traveling tent show that they owned and operated. She attended Monte Cassino and then Northwestern University in Illinois, before transferring to the American Academy of Dramatic Arts in New York City in 1938.

Isley returned to Tulsa for a 13-week radio program, arranged by her father, and then made their way to Hollywood. Isley landed two small roles, first in a 1939 John Wayne Western titled New Frontier, followed by a serial entitled Dick Tracy's G-Men. She failed a screen test for Paramount Pictures and decided to return to New York City.

Isley worked part-time modeling hats for the Powers Agency while looking for possible acting jobs. When she learned of auditions for the lead role in Claudia, Rose Franken's hit play, she presented herself to David O. Selznick's New York office after he heard her audition he was impressed enough to have his secretary call her back. Following an interview, she was signed to a seven-year contract. 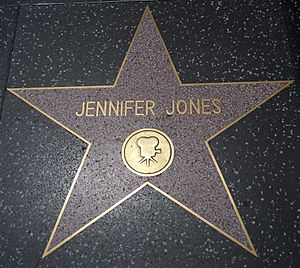 Star on the Hollywood Walk of Fame at 6429 Hollywood Blvd

Jones enjoyed a quiet retirement, living with her son Robert Walker Jr. and his family in Malibu for the last six years of her life. She granted no interviews and rarely appeared in public. Jones participated in Gregory Peck's AFI Life Achievement Award ceremony in 1989 and appeared at the 70th (1998) and 75th (2003) Academy Awards as part of the shows' tributes to past Oscar winners.

She died of natural causes on December 17, 2009, at age 90. She was cremated and her ashes were interred with her second husband in the Selznick private room at the Forest Lawn Memorial Park in Glendale, California.

All content from Kiddle encyclopedia articles (including the article images and facts) can be freely used under Attribution-ShareAlike license, unless stated otherwise. Cite this article:
Jennifer Jones Facts for Kids. Kiddle Encyclopedia.