The New Museum of Contemporary Art, founded in 1977 by Marcia Tucker, is a museum in New York City at 235 Bowery, on Manhattan's Lower East Side.

The museum originally opened in a space in the Graduate Center of the then-named New School for Social Research at 65 Fifth Avenue. The New Museum remained there until 1983, when it rented and moved to the first two and a half floors of the Astor Building at 583 Broadway in the SoHo neighborhood. 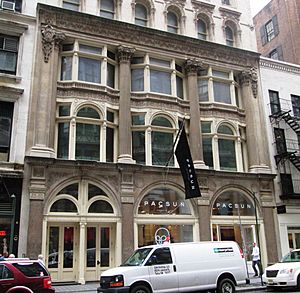 In 1999, Marcia Tucker was succeeded as director by Lisa Phillips, previously the curator of contemporary art at the Whitney Museum of American Art. In 2001 the museum rented 7,000 square feet of space on the first floor of the Chelsea Art Museum on West 22nd Street for a year.

Over the past five years, the New Museum has exhibited artists from Argentina, Brazil, Bulgaria, Cameroon, China, Chile, Colombia, Cuba, Germany, Poland, Spain, South Africa, Turkey, and the United Kingdom among many other countries. In 2003, the New Museum formed an affiliation with Rhizome, a leading online platform for global new media art.

In 2005, the museum was among 406 New York City arts and social service institutions to receive part of a $20 million grant from the Carnegie Corporation, which was made possible through a donation by New York City mayor Michael Bloomberg.

The New Museum was established by an independent curator Marcia Tucker in 1977. It is dedicated to introducing new art and new ideas, by artists who have not yet received significant exposure or recognition. Ever since it was founded, the museum has taken on the mission to challenge the stiff institutionalization of an art museum. It continues to bring new ideas into the art world and to connect with the public.

On December 1, 2007, the New Museum opened the doors to its new $50 million location at 235 Bowery, between Stanton and Rivington Streets. The seven-story 58,700-square-foot facility, designed by the Tokyo-based firm Sejima + Nishizawa/SANAA and the New York-based firm Gensler, has greatly expanded the Museum’s exhibitions and space.

SANAA’s design is chosen because it is in accord with the museum’s mission—the flexibility of the building, its changeable atmosphere corresponds to the ever-changing nature of contemporary art. Its bold decision to put a stack of white boxes in the Bowery neighborhood and its success to achieve a harmonious symbiotic relationship between the two manifest the coexistence of different dynamic energy of contemporary culture.

In April 2008, the museum's new building was named one of the architectural New Seven Wonders of the World by Conde Nast Traveler. The New Museum has been and will continue to be a crucial landmark of the Bowery district. “Bowery embraces idiosyncrasy in an unprejudiced manner and we were determined to make the museum building feel like that”, as one of the directors of the museum puts it. The neighborhood appears to be a fearless confrontation with the convention image of downtown Manhattan—an adventurous spirit that the New Museum always sees itself searching for.

The Bowery location has gallery and events space, plus a Resource Center with books and computers for access to their main web site and digital archive. The New Museum Digital Archive is an online resource that provides accessibility to primary sources from exhibitions, publications, and programs. The archive holds 7,500 written and visual materials for artists and researchers to access. The New Museum Digital Archive's database is searchable through 4,000 artists, curators, and organizations connected to New Museum exhibitions, performances, and publications.

On January 24, 2019, eligible employees at the New Museum voted 38-8 to unionize, with a plan to join NewMuU-UAW Local 2110. Asked for their reasons for unionizing, the New Museum employees said, “As the New Museum Union, we ask, above all, that these ideals be mirrored in the museum’s working conditions, hiring practices, wages, and benefits. We believe that fair compensation and transparency for all workers throughout the museum is essential to ensuring its diversity, reducing turnover, and strengthening the New Museum community: salaries, wages, and benefits at the museum must be sustainable for everyone, regardless of the privileges afforded them by race, class, or gender.” 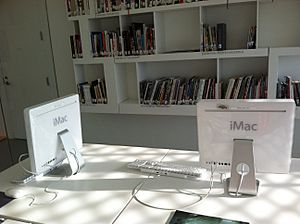 When she founded the museum, Marcia Tucker decided it should buy and sell works every 10 years so that the collection would always be new. It was an innovative plan that was never carried out. In 2000, the museum accepted its first corporate donation of artworks. The museum now has a modest collection of about 1,000 works in many media. In 2004, it joined forces with the Museum of Contemporary Art, Chicago and the Hammer Museum in Los Angeles in raising $110,000 from two foundations -- $50,000 from the American Center Foundation and $60,000 from the Peter Norton Family Foundation—to help pay for commissioning, buying, and exhibiting the work of emerging young artists.

Exhibitions and the Triennial 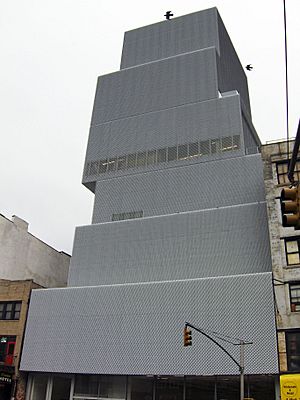 Another view of the front from Prince Street

The Museum presents the work of under-recognized artists, and has mounted ambitious surveys of important figures such as Ana Mendieta, William Kentridge, David Wojnarowicz, Paul McCarthy and Andrea Zittel before they received widespread public recognition. In 2003, the New Museum presented the highly regarded exhibition Black President: The Art and Legacy of Fela Anikulapo-Kuti.

Continuing its focus of exhibiting emerging international artists, the museum organized the much discussed and visited exhibition, The Generational: "Younger Than Jesus" curated by Massimiliano Gioni, in 2009 which went on the become the first edition of its now signature exhibition series the "New Museum Triennial". Subsequently, the museum held the second and third editions of its Triennial, respectively; "The Ungovernables" (2012 – curated by Eungie Joo) and the much lauded "Surround Audience" (2015 – curated by Lauren Cornell and Ryan Trecartin).

Promoted twice since joining the New Museum in 2011, Margot Norton has organized exhibitions including one by Turner Prize-winner Laure Prouvost and the museum solo of Judith Bernstein.

The museum has announced a summer show, scheduled to open on July 20, 2016, called "The Keeper". With over 4,000 objects from more than two dozen collectors, it presents object lessons about the process of collecting.

In 2008, art dealer Barbara Gladstone initiated the formation of the Stuart Regen Visionaries Fund at the New Museum, established in honor of her late son and renowned art dealer. The gift was meant to support a new series of public lectures and presentations by cultural visionaries, the Visionaries Series, which debuted in 2009 and features prominent international thinkers in the fields of art, architecture, design and contemporary culture; past speakers have included Alice Waters and Jimmy Wales.

IdeasCity is the New Museum's platform to explore art and culture beyond the walls of the museum. Founded in 2011 by Lisa Phillips and Karen Wong, IdeasCity is a major collaborative initiative between hundreds of arts, design, education, and community organizations that consists of two distinct components: The biennial IdeasCity Festival in New York City, and IdeasCity Global Programs in key urban centers around the world, including Athens, Detroit, Istanbul, New Orleans, São Paulo, Shanghai, and Toronto.

In 2002, the New Museum sold its previous home in SoHo for $18 million. It subsequently bought the new Bowery site for $5 million. In order to cover the building and endowment, it raised an estimated $64 million.

Since taking office, director Lisa Phillips expanded board membership to 42 from 18. As of 2015, it includes collectors Maja Hoffmann, Dakis Joannou, Eugenio López Alonso, and Leonid Mikhelson, among others.

All content from Kiddle encyclopedia articles (including the article images and facts) can be freely used under Attribution-ShareAlike license, unless stated otherwise. Cite this article:
New Museum Facts for Kids. Kiddle Encyclopedia.