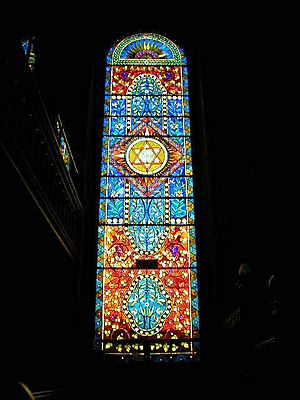 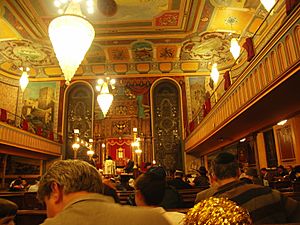 Reading the Book of Esther on Purim 2007 at Bialystoker

The Bialystoker Synagogue at 7–11 Bialystoker Place, formerly Willett Street, between Grand and Broome Streets in the Lower East Side neighborhood of Manhattan, New York City is an Orthodox Jewish synagogue. The building was constructed in 1826 as the Willett Street Methodist Episcopal Church; the synagogue purchased the building in 1905.

The synagogue was designated a New York City Landmark in 1966. It is one of only four early-19th century fieldstone religious buildings surviving from the late Federal period in Lower Manhattan, and is the oldest building used as a synagogue in New York City.

The Bialystoker Synagogue was first organized in 1865 on Manhattan's Lower East Side as the Chevra Anshei Chesed of Bialystok, founded by a group of Jews who came from town of Białystok, at that time located in the Russian Empire, but now in Poland. The congregation was begun in a building on Hester Street, it later moved to Orchard Street, and ultimately to its present location 7–11 Bialystoker Place on the Lower East Side.

In order to accommodate the influx of new immigrants from that area of Poland, in 1905 the congregation merged with congregation Adas Yeshurun, also from Bialystok, and formed the Beit Ha-Knesset Anshei Bialystok (The Bialystoker Synagogue). The newly formed congregation then purchased (and moved into) the Willett Street Methodist Episcopal Church at 7 Willet Street, which was later renamed Bialystoker Place. During the Great Depression a decision was made to beautify the main sanctuary, to provide a sense of hope and inspiration to the community.

The fieldstone Methodist Episcopal Church building was built in 1826 with a simple pedimented roof and round arched windows. The building is made of Manhattan schist from a quarry on nearby Pitt Street. The exterior is marked by three windows over three doors framed with round arches, a low flight of brownstone steps, a low pitched pediment roof with a lunette window and a wooden cornice.

The elaborate Torah Ark is believed to have been carved in Bialystok and shipped to New York.

As the synagogue is home to an Orthodox Jewish congregation, a balcony section was constructed to accommodate female congregants. In the corner of the women's gallery a small hidden door in the wall that leads to a ladder going up to an attic, lit by two windows was constructed. When it was first opened, the building was a rest stop for the Underground Railroad movement; runaway slaves found sanctuary in this attic.

In 1988, the congregation restored the interior to its original splendor, and the former Hebrew school building that is attached, but had become dilapidated, was renovated and reopened as The Daniel Potkorony Building. The magnificent stained glass windows were recently completely recreated and renewed.

All content from Kiddle encyclopedia articles (including the article images and facts) can be freely used under Attribution-ShareAlike license, unless stated otherwise. Cite this article:
Bialystoker Synagogue Facts for Kids. Kiddle Encyclopedia.