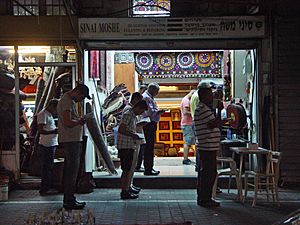 Minyan, in Judaism, is a group of ten Jewish men ( or women in non Orthodox groups) that are needed to perform certain rituals.

Some rituals require a minyan; the presence of a rabbi (a teacher, not a priest) is not essential—it is said that "nine rabbis do not constitute a minyan, but ten cobblers can".

The following instances which require a minyan are listed in the Mishnah in Megillah (iv. 3):

Other instances which require the presence of a minyan include:

While the required quorum for most activities requiring a quorum is usually ten, it is not always so. For example, the Passover sacrifice or Korban Pesach (from the days of the Temple in Jerusalem) must be offered before a quorum of 30. (It must be performed in front of kahal adat yisrael, the assembly of the congregation of Israel. Ten are needed for the assembly, ten for the congregation, and ten for Israel.)

All content from Kiddle encyclopedia articles (including the article images and facts) can be freely used under Attribution-ShareAlike license, unless stated otherwise. Cite this article:
Minyan Facts for Kids. Kiddle Encyclopedia.