The Manhattan Bridge is a suspension bridge across the East River in New York City. It connects the New York City boroughs of Manhattan and Brooklyn. The bridge is 6,855 ft (2,089 m) long.

The bridge opened on December 31, 1909. It was designed by Leon Moisseiff. Its design was new for bridges at the time. Many longer suspension bridges are based on this bridge's design.

The bridge is officially landmarked. It was made a National Historic Civil Engineering Landmark in 2009.

The bridge has four vehicle lanes on the upper level, split between two roadways carrying opposite directions of traffic. The lower level has three vehicle lanes, formerly reversible depending on time of day, but now carrying exclusively Manhattan-bound traffic; four subway tracks, two under each of the upper roadways; a walkway on the west; and a bikeway on the east. The bridge once carried New York State Route 27 and later was planned to carry Interstate 478. The main span is 1,480 feet (450 m) long. Carrère and Hastings designed approach plazas on both ends of the bridge. The bridge was the subject of American artist Edward Hopper's painting Manhattan Bridge Loop.

The bridge was the last of the three suspension spans built across the lower East River, following the Brooklyn and Williamsburg Bridges. In the earliest plans it was to have been called "Bridge No. 3", but was given the name Manhattan Bridge in 1902.

A plan for the suspension-bridge span were rejected. The eventually voted to use wire cables in the bridge in September 1904. 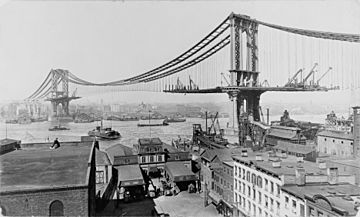 The Manhattan Bridge under construction in March 1909

The first temporary wire between the Manhattan Bridge's two towers was strung in June 1908. It was to be replaced later with two sets of permanent, thicker main cables, each 21 inches (53 cm) thick, in pairs on both sides of the bridge's deck.

By this time, the construction cost had increased to $22 million.

The construction of the bridge span required 30,000 tons of steel. Erection of the superstructure and steel fabrication were contracted to The Phoenix Bridge Company. The first girder for the new bridge was installed in February 1909. By April, the majority of the span had been fitted into place between the main cables. 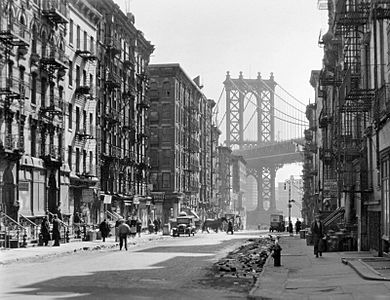 View down Pike Street toward the Manhattan Bridge, 1936, photograph by Berenice Abbott

A group of 100 "leading citizens of Brooklyn" walked over the bridge on December 5, 1909, marking the unofficial completion of the bridge. The bridge was officially opened by outgoing Mayor George B. McClellan Jr. on December 31, 1909.

Shortly after opening, a fire on the Brooklyn side of the Manhattan Bridge damaged the structure.

In 1910, the year after the bridge opened, the architectural firm Carrère and Hastings drew up preliminary plans for an elaborate grand entry to the bridge on the Manhattan side, as part of the "City Beautiful" movement, as well as a smaller approach on the Brooklyn side. These approaches would hide the bridge.

Construction began that year, and plans were finalized in 1912. The arch and colonnade were completed in 1915. Daniel Chester French designed two 12-foot-high (3.7 m), 20-short-ton (18-long-ton; 18 t) pylons named "Brooklyn" and "Manhattan" on the Brooklyn side of the Manhattan Bridge, which were installed in November 1916.

An upper-deck roadway on the bridge was installed in 1922.

Floodlights and barbed-wire fences were installed at the bases of the bridge's anchorages in 1951, during the Cold War. The installations were fortified to protect against "possible sabotage attempts under wartime conditions". The anchorages themselves were sealed.

The pylons on the Brooklyn side were removed in 1963 to accommodate a widened roadway, and moved to the Brooklyn Museum.

The subway trains crossing the Manhattan Bridge had a major impact on its condition. The bridge also deteriorated over time. The bridge has been renovated many times over the years.

The arch and colonnade had 258 floodlights installed by 2001. 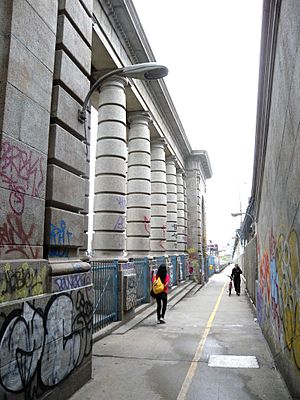 One of the pedestrian walkways

To celebrate the bridge's centennial anniversary, a series of events and exhibits were organized by the New York City Bridge Centennial Commission in October 2009. These included a ceremonial parade across the Manhattan Bridge on the morning of October 4 and a fireworks display in the evening. In 2009, the bridge was designated as a National Historic Civil Engineering Landmark by the American Society of Civil Engineers.

All content from Kiddle encyclopedia articles (including the article images and facts) can be freely used under Attribution-ShareAlike license, unless stated otherwise. Cite this article:
Manhattan Bridge Facts for Kids. Kiddle Encyclopedia.