The Henry Street Settlement is a not-for-profit social service agency in the Lower East Side neighborhood of Manhattan, New York City that provides social services, arts programs and health care services to New Yorkers of all ages. It was founded under the name Nurses' Settlement in 1893 by progressive reformer and nurse Lillian Wald.

The Settlement serves about 50,000 people each year. Clients include low-income individuals and families, survivors of domestic violence, youngsters ages 2 through 21, individuals with mental and physical health challenges, senior citizens, and arts and culture enthusiasts who attend performances, classes and exhibitions at Henry Street's Abrons Arts Center.

The Settlement's administrative offices are still located in its original (c. 1832) federal row houses at 263, 265 and 267 Henry Street in Manhattan. Services are offered at 17 program sites throughout the area, many of them located in buildings operated by the New York City Housing Authority.

The Settlement's buildings at 263, 265 and 267 Henry Street were designated New York City landmarks in 1966, and these buildings, along with the Neighborhood Playhouse building at 466 Grand Street, were collectively designated a National Historic Landmark in 1989.

In 1892, Lillian Wald, a 25-year-old nurse then enrolled in the Women's Medical College, volunteered to teach a class on home health care for immigrant women at the Louis Down-Town Sabbath and Daily School on the Lower East Side. One day, she was approached by a young girl who kept repeating "mommy ... baby ... blood". Wald gathered some sheets from her bed-making lesson and followed the child to her home, a cramped two-room tenement apartment. Inside, she found the child's mother who had recently given birth and in need of health care. The doctor tending to her had left because she could not afford to pay him. This was Wald's first experience with poverty; she called the episode her "baptism by fire" and dedicated herself to bringing nursing care, and eventually education and access to the arts, to the immigrant poor on Manhattan's Lower East Side. The next year she founded the Nurses' Settlement, which later changed its name to the Henry Street Settlement.

Two years later, in 1895, Jacob Schiff, a banker and philanthropist purchased the Federal style townhouse at 265 Henry Street for the new organization to use. The building was expanded upwards with an additional story to provide more space, and Schiff donated the building to the Settlement in 1903. The year before, the Settlement had added new facilities, including a gymnasium at 299, 301 and 303 Henry Street. 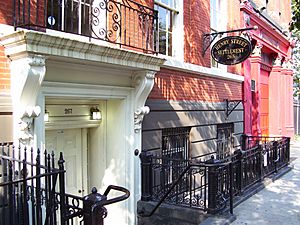 A street-level view of 267 Henry Street

The organization expanded again in 1906, when Morris Loeb bought the building at 267 Henry Street for it to use. This Greek Revival townhouse was purchased from the Hebrew Technical School for Girls, which had previously employed the architectural firm of Buchman & Fox in 1900 to redo the facade in Colonial Revival style.

In 1915, the Neighborhood Playhouse, one of the first "Little Theatres", was created by the sisters Alice and Irene Lewisohn at the corner of Grand and Pitt Streets, offering classical drama for the people of the area. The theatre still operates, as the Harry De Jur Playhouse.

In 1927, the Henry Street Music School began operation. It had its formal opening in November 1928. Early supporters of this addition to the settlement included Aaron Copland and Walter Damrosch. In 1937, the school premiered the play-opera The Second Hurricane, which featured music by Copland, libretto by Edwin Denby, direction by Orson Welles, and orchestral conduction by Lehman Engel. The director at the time, Grace Spofford, initially suggested the idea of a play-opera for school performers, and was largely responsible for bringing the production together. Alumni of the music school include violinists Berl Senofsky, Stuart Canin, Isidor Lateiner, and Helen Kwalwasser (who later became a faculty member); pianists Martin Canin and Jacob Lateiner; and singer Billie Lynn Daniel. Faculty have included violinist Ivan Galamian, pianist Isabelle Vengerova, bassoonist Stephen Maxym, conductor Arnold Gamson, and composers Paul Creston, Roy Harris, and Robert Starer.

The Settlement began leasing the townhouse at 263 Henry Street, on the other side of its original building, in 1938, using it for classrooms and residences, and in 1949 it purchased the building, which was originally built in the Federal style but had been extensively altered. This combining of the three townhouse – 263, 265 and 267 – had the consequence of preserving part of the 1820s streetscape amid what later became a crowded tenement district. The block of Henry Street between Montgomery Street and Grand Street, which also includes St. Augustine's Church, gives an impression of uptown Manhattan as it would have looked in the 1820s and 1830s. #263 Henry Street was restored in 1989 and #265 in 1992.

Today, Henry Street is known for its pioneering efforts in social service and health care delivery. Its innovations included the establishment of one of New York City's first off-street playgrounds (1902); funding the first public school nurse (1902); starting the Visiting Nurse Service, which became independent as the Visiting Nurse Service of New York in 1944; opening one of the nation's first mental health clinics (1946), one of the first transitional housing facilities for the homeless (1972), the first Naturally Occurring Retirement Community (NORC) in public housing (1994) and the city's first Safe Haven shelter for homeless women (2007). 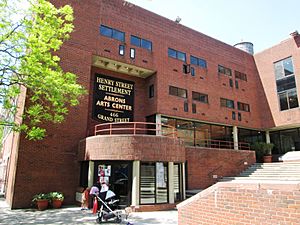 All content from Kiddle encyclopedia articles (including the article images and facts) can be freely used under Attribution-ShareAlike license, unless stated otherwise. Cite this article:
Henry Street Settlement Facts for Kids. Kiddle Encyclopedia.