At 15, she was the top-ranked woman player in the world. She was the Women's World Chess Champion from 1996 to 1999. In October 2005 Polgar had a FIDE rating of 2577, making her the second-ranked woman in the world at the time, after her sister Judit Polgár. She has been inactive and has not played in official competition since 2004.

Polgar is head of the Susan Polgar Institute for Chess Excellence at Texas Tech University, and a chess writer and promoter. She had been on the Executive of the United States Chess Federation, but was stripped of her membership after a complicated internal struggle.

Susan was born and brought up in Budapest, Hungary, and now lives in Lubbock, Texas. She recently moved from Forest Hills, Queens in New York City, where she ran the Polgar Chess Center and the Susan Polgar Foundation, which gives chess training to children, especially girls. 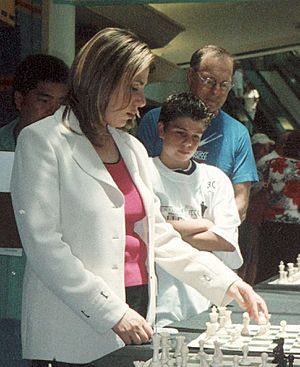 Polgar in a simultaneous exhibition

Polgar and her two younger sisters, Judit and Sofia, were part of an educational experiment carried out by their father László Polgár. He and his wife Klara educated their three daughters at home, with chess as the specialist subject.

In January 1991, Polgar became the third woman to earn the Grandmaster title. Much is made, by her supporters, of the fact that Polgar had got the three GM norms and a rating over 2500. Nona Gaprindashvili was awarded the Grandmaster title in 1978 mainly as a result of winning Lone Pine International 1977, but she did not quite make the usual 24 games required at that time. Maia Chiburdanidze was awarded the GM title in 1984 for winning at New Delhi (1984), and for beating Nona Gaprindashvili and two others in matches for the Women's World Chess Championship. However, before Polgar reached the title, Chiburdanidze had more than achieved the traditional GM qualifications by her performances at Banja Luka and Bilbao.

Polgar had tended to avoid women-only tournaments, but she abandoned this when she entered the 1993 cycle for the Women's World Championship. She became the Women's World Champion at her second attempt in 1996. Two years later, her title defense against Xie Jun of China was scheduled to take place in November, 1998. However, Polgar requested a postponement because she was pregnant and also FIDE had been unable to find a satisfactory sponsor. Ultimately, in 1999, a match was arranged, but under conditions to which Polgar objected – firstly because she had recently had a child, and had not had sufficient time to recuperate, and secondly because the match was to be held entirely in China, the home country of her challenger. She also wanted a significantly larger prize fund.

When Polgar refused to play under these conditions, FIDE declared that she had forfeited the title, and instead organized a match between Xie Jun and Alisa Galliamova for the Women's World Chess Championship, which was won by Xie Jun. Polgar sued in the Court of Arbitration for Sport in Lausanne, Switzerland for monetary damages and the restoration of her title. In March 2001, the case was settled, with Polgar withdrawing her claims and FIDE agreeing to pay Polgar's attorney's fees in the amount of $25,000. Since Xie Jun had already been crowned Women's World Champion, FIDE could not restore the title to Polgar. Polgar has not participated in subsequent Women's World Championship cycles.

Paid substantial appearance fees by the Hungarian Chess Federation,p106 the family did play together in two female-only events. The Hungarians (nicknamed 'Polgaria') won the Women's Chess Olympiads, with a team packed with Polgárs, in 1988 and 1990.p106; 156 Zsuzsa, Judit, Sofia (the least strong sister) and Ildiko Madl were the team which pushed the Soviet Union into second place for the first time.

The United States Chess Federation named Polgar "Grandmaster of the Year" in 2003, the first time a woman has won that honor. In that same year (2003), Polgar also became the first woman to win the US Open Blitz Championship, against a field which included seven grandmasters. She won that title again in 2005 and in 2006.

She helped train and played the top board for the United States women's team at the 2004 Chess Olympiad held in October in Majorca, Spain. Overall, the team won the silver medal, and Polgar won an individual gold medal. This was not her first Olympiad: she has a total of ten Olympiad Medals (five Gold, four Silver, and one Bronze). She has played 56 games in the Olympiads, never losing a single game.

In 1994, Polgar married computer consultant Jacob Shutzman, and moved to New York. They had two sons, Tom and Leeam, but later divorced. In December 2006, she married her longtime business manager and friend, Paul Truong.

All content from Kiddle encyclopedia articles (including the article images and facts) can be freely used under Attribution-ShareAlike license, unless stated otherwise. Cite this article:
Susan Polgar Facts for Kids. Kiddle Encyclopedia.