Judit Polgár (born 23 July 1976) is a Hungarian chess grandmaster. She is generally considered the strongest female chess player of all time. In 1991, Polgár achieved the title of Grandmaster at the age of 15 years and 4 months, at the time the youngest to have done so, breaking the record previously held by former World Champion Bobby Fischer. She was the youngest ever player to break into the FIDE Top 100 players rating list, ranking No. 55 in the January 1989 rating list, at the age of 12.

She is the only woman to qualify for a World Championship tournament, having done so in 2005. She is the first, and to date only, woman to have surpassed 2700 Elo, reaching a career peak rating of 2735 and peak world ranking of No. 8, both achieved in 2005. She was the No. 1 rated woman in the world from January 1989 until the March 2015 rating list, when she was overtaken by Chinese player Hou Yifan; she was the No. 1 again in the August 2015 women's rating list, in her last appearance in the FIDE World Rankings.

On 13 August 2014, she announced her retirement from competitive chess. In June 2015, Polgár was elected as the new captain and head coach of the Hungarian national men's team. On 20 August 2015, she received Hungary's highest decoration, the Grand Cross of the Order of Saint Stephen of Hungary. 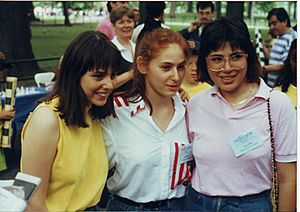 Polgár was born in Budapest, to a Hungarian Jewish family. Polgár and her two older sisters, Grandmaster Susan and International Master Sofia, were part of an educational experiment carried out by their father László Polgár, in an attempt to prove that children could make exceptional achievements if trained in a specialist subject from a very early age. "Geniuses are made, not born," was László's thesis. He and his wife Klára educated their three daughters at home, with chess as the specialist subject. László also taught his three daughters the international language Esperanto. They received resistance from Hungarian authorities as home-schooling was not a "socialist" approach. They also received criticism at the time from some western commentators for depriving the sisters of a normal childhood.

Traditionally, chess had been a male-dominated activity, and women were often seen as weaker players, thus advancing the idea of a Women's World Champion. However, from the beginning, László was against the idea that his daughters had to participate in female-only events. "Women are able to achieve results similar, in fields of intellectual activities, to that of men," he wrote. "Chess is a form of intellectual activity, so this applies to chess. Accordingly, we reject any kind of discrimination in this respect." This put the Polgárs in conflict with the Hungarian Chess Federation of the day, whose policy was for women to play in women-only tournaments. Polgár's older sister, Susan, first fought the bureaucracy by playing in men's tournaments and refusing to play in women's tournaments. Susan Polgár, when she was a 15-year-old International Master, said in 1985 that it was due to this conflict that she had not been awarded the Grandmaster title despite having made the norm eleven times. 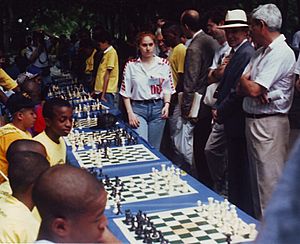 Polgár has rarely played in women's-specific tournaments or divisions and has never competed for the Women's World Championship: "I always say that women should have the self-confidence that they are as good as male players, but only if they are willing to work and take it seriously as much as male players." While László Polgár has been credited with being an excellent chess coach, the Polgárs had also employed professional chessplayers to train their daughters.

Susan Polgár, the eldest, was the first of the sisters to achieve prominence in chess by winning tournaments, and by 1986, she was the world's top-rated female chess player. Initially, being the youngest, Judit was separated from her sisters while they were in training. However, this only served to increase Judit's curiosity. After learning the rules, they discovered Judit was able to find solutions to the problems they were studying, and she began to be invited into the group. One evening, Susan was studying an endgame with their trainer, a strong International Master. Unable to find the solution, they woke Judit, who was asleep in bed and carried her into the training room. Still half asleep, Judit showed them how to solve the problem, after which they put her back to bed. László Polgár's experiment would produce a family of one international master and two grandmasters and would strengthen the argument for nurture over nature, as well as prove women could be chess grandmasters. 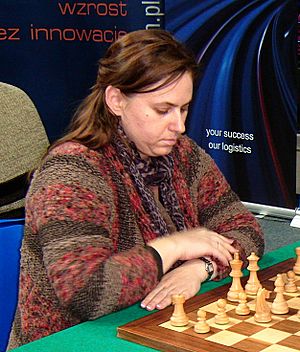 Trained in her early years by her sister Susan, who ultimately became Women's World Champion, Judit Polgár was a prodigy from an early age. At age 5, she defeated a family friend without looking at the board. After the game, the friend joked: "You are good at chess, but I'm a good cook." Judit replied: "Do you cook without looking at the stove?" However, according to Susan, Judit was not the sister with the most talent, explaining: "Judit was a slow starter, but very hard-working." Polgár described herself at that age as "obsessive" about chess. She first defeated an International Master, Dolfi Drimer, at age 10, and a grandmaster, Lev Gutman, at age 11.

Members of Polgár's family perished in the Holocaust and her grandmother was a survivor of Auschwitz concentration camp.

In August 2000, Polgár married Hungarian veterinary surgeon Gusztáv Font. They have two children. While Judit remained in Hungary, the rest of her family eventually emigrated: Sofia and her parents to Israel and later to Canada, and Susan to the United States.

In March 2013 she was awarded the Order of Merit of the Republic of Hungary Commander's Cross with Star, one of Hungary's highest awards, "for her worldwide acknowledged life achievement as an athlete, for promoting the game of chess and for her efforts to promote the educational benefits of chess." In August 2015, she received the Order of Saint Stephen of Hungary, the highest state Order that can be made to a Hungarian civilian.

All content from Kiddle encyclopedia articles (including the article images and facts) can be freely used under Attribution-ShareAlike license, unless stated otherwise. Cite this article:
Judit Polgár Facts for Kids. Kiddle Encyclopedia.