Kids Encyclopedia Facts
In this article, the family name is Aleksandrov.

He was ranked world number one from April 2006 to January 2007. He regained the top ranking in October 2008 until January 2010. His peak rating was 2816 in July 2015, placing him joint-tenth on the list of highest FIDE-rated players of all time.

Topalov is married and has two daughters.

Topalov was born in Ruse, Bulgaria. His father taught him to play chess at the age of eight. Topalov quickly established himself as a chess prodigy. At age 12, Topalov began working with Silvio Danailov, a relationship that continues today.

In 1989 he won the World Under-14 Championship in Aguadilla, Puerto Rico, and in 1990 won the silver medal at the World Under-16 Championship in Singapore. He became a Grandmaster in 1992 and won in Terrassa. He shared first at the Budapest Zonal group B in 1993 but struggled at the Biel Interzonal, scoring 5.5/13. He made his Olympiad debut in Moscow 1994, leading Bulgaria to a fourth-place, defeating Garry Kasparov on board one.

Over the next ten years Topalov ascended the world chess rankings. He played in Linares 1994 (6½/13), Linares 1995 (8/13), Amsterdam 1995. In a strong run of tournament performances in 1996 he placed third at Wijk aan Zee, tied for first at Amsterdam, Vienna and Madrid, won outright at Novgorod and shared first in Dos Hermanas. As early as 1996, he was being invited to events for the world's elite such as Las Palmas (5/10), the first category 21 tournament, played in December 1996, with Kasparov, Anand, Kramnik and Karpov participating. The next year he won at Antwerp and Madrid. 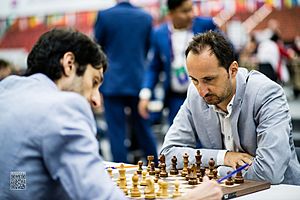 Topalov's loss to reigning Classical World Champion Garry Kasparov at the 1999 Corus chess tournament is generally hailed as one of the greatest games ever played. Kasparov later said, "He looked up. Perhaps there was a sign from above that Topalov would play a great game today. It takes two, you know, to do that."

In 2001, he shared the overall title at Amber Melody and won at Dortmund.

In the knockout tournaments for the FIDE World Chess Championship, he reached the last 16 in 1999, the quarter-finals in 2000, the final 16 in 2001, and the semifinals in the 2004 tournament. In 2002, he lost the final of the Dortmund Candidates Tournament (for the right to challenge for the rival Classical World Chess Championship) to Peter Leko.

Topalov tied for first at the 2002 NAO Chess Masters in Cannes and won at Benidorm in 2003.

Topalov scored his first major success at Linares 2005, tying for first place with Garry Kasparov (though losing on tiebreak rules), and defeating Kasparov in the last round, in what was to be Kasparov's last tournament game before his retirement. He followed this up with a one-point victory at Mtel Masters. In 2006 he tied for first at Corus with Anand.

Based on his rating, Topalov was invited to the eight-player, double round-robin FIDE World Chess Championship in San Luis, Argentina, in September–October 2005. Scoring 6½/7 in the first cycle, Topalov had virtually clinched the tournament at the halfway mark, before drawing every game in the second cycle to win by 1½ points to become FIDE World Chess Champion. The average rating of the field in the championship was 2739, and Topalov's performance rating was 2890.

On 16 April 2006, FIDE President Kirsan Ilyumzhinov announced that a match between Classical and FIDE World Champions Kramnik and Topalov would be held in September–October 2006 to re-unify the Championships after thirteen years of separation. Kramnik defeated Topalov to become the first undisputed champion in thirteen years.

On 28 September 2006, Topalov's manager Silvio Danailov published a press release, casting suspicion on Kramnik's behaviour during the games. The Bulgarian team made a public statement that Kramnik visited his private bathroom (the only place without any audio or video surveillance) unreasonably often, about fifty times per game (a number that FIDE officials later claimed to be exaggerated) and made the most significant decisions in the game in the bathroom.

They also demanded that the organizers of the tournament allow journalists access to the surveillance video from Kramnik's room for games 1 through 4. The organizers made parts of the video available, explaining that other parts of it were missing due to technical issues. Danailov demanded to stop the use of private restrooms and bathrooms, and threatened to reconsider Topalov's participation in the match. The Appeals Committee that governed the match agreed, and ruled that the players' private restrooms should be closed and replaced with a shared one.

Kramnik refused to play game 5 and was forfeited. On 1 October, the restroom issue was resolved in Kramnik's favour and the Appeals Committee resigned and were replaced. The FIDE president Kirsan Ilyumzhinov decided that the current score of 3–2 should be preserved. He also indicated that this was not a compromise decision but his own. The match resumed on 2 October 2006.

On 1 October, the Association of Chess Professionals released a statement denouncing Danailov for publicly accusing his opponent without evidence, and calling for him to be investigated by the FIDE Ethics Committee.

On 3 October, Topalov said in a press conference, "I believe that his (Kramnik's) play is fair, and my decision to continue the match proves it". However, the next day, the crisis escalated, with Topalov's manager strongly implying that Kramnik was receiving computer assistance.

On 14 December 2006, Topalov directly accused Kramnik of using computer assistance in their World Championship match. On 14 February 2007, Topalov's manager released pictures, purporting to show cables in the ceiling of a toilet used by Kramnik during the World Championship match in Elista. They were supposedly reported to the authorities, who Danailov claims suppressed the information. The Topalov team claims they were pressured by officials to keep their allegations quiet. On 29 July 2007, following a complaint by Kramnik's manager Carsten Hensel, the FIDE Ethics Commission sanctioned Topalov with "a severe reprimand" because of the accusations made in the interview of 14 December. According to the Ethics Commission, "these statements were clearly defamatory and damaged the honour of Mr. Vladimir Kramnik, harming his personal and professional reputation".

Soon after losing the match, Topalov finished third of four players in Essent with only 2½/6, losing both games against Judit Polgár and one against Shakhriyar Mamedyarov.

In May 2006, Topalov defended his M-Tel Masters title, coming first with 6½/10, a half point ahead of Gata Kamsky.

In January 2007, Topalov finished in joint first place at Corus along with Levon Aronian and Teimour Radjabov.

In May 2007, Topalov won the M-Tel Masters tournament for a third consecutive time with 5½/10, defeating then- leader Sasikiran in the final round.

In September 2008, Topalov won the Bilbao 2008 tournament. Following this victory, he became the world number one on the official October 2008 ratings list. He also won the Pearl Spring event held in Nanjing as well as Villarobledo Chess Festival.

Topalov lost his chance to compete in the 2007 world championship tournament when he lost the 2006 reunification match. Danailov expressed a desire for a rematch between Topalov and Kramnik, proposing a match in March 2007, though no such match took place. The issue was settled in June 2007, when Topalov and Kramnik were granted special privileges in the 2008–09 championship cycle. Topalov was given direct entry to a "Challenger Match" against the winner of the Chess World Cup 2007.

The 2007 Chess World Cup was won by Gata Kamsky. The Challenger Match between Topalov and Kamsky took place in February 2009 in Sofia. Topalov won the match 4½–2½.

Topalov won the 2010 Linares chess tournament held in February, defeating Boris Gelfand in the last round.

Before the 2010 World Chess Championship match with Veselin Topalov, Vishwanathan Anand, who had booked on the flight Frankfurt–Sofia on 16 April, was stranded due to the cancellation of all flights following the volcano ash cloud from Eyjafjallajökull. Anand asked for a three-day postponement, which the Bulgarian organisers refused on 19 April. Anand eventually reached Sofia on 20 April, after a 40-hour road journey.

Consequently, the first game was delayed by one day.

The match consisted of 12 games. In Game 1, Topalov quickly defeated Anand in 30 moves, utilizing a very sharp line of attack that broke through Anand's Grunfeld Defence. It was revealed afterwards that Topalov had found the line during his opening preparation, with the help of a powerful supercomputer loaned to him by Bulgaria's Defense Department. Anand quickly responded with a win in Game 2, employing a novelty out of the Catalan Opening that was not easily recognized by computers at the time (15. Qa3!?, followed by 16. bxa3!). Anand would win again with the Catalan in Game 4, only to drop Game 8 and leave the score level once again. After 11 games the score was tied at 5½–5½. Anand won game 12 on the Black side of a Queen's Gambit Declined to win the game and the match. Topalov chose to accept a pawn sacrifice by Anand, hoping to force a result and avoid a rapid chess tiebreak round. But after Topalov's dubious 31st and 32nd moves, Anand used the sacrifice to obtain a strong attack against Topalov's relatively exposed king. Topalov subsequently resigned, allowing Anand to retain the World Championship.

After 17 moves, Topalov initiates a series of strong tactical blows with the sacrifice of a knight and a rook.

On the way to winning M-Tel Masters in 2005, Topalov defeated former FIDE world champion Ruslan Ponomariov with the white pieces in a Queen's Indian Defense.

All content from Kiddle encyclopedia articles (including the article images and facts) can be freely used under Attribution-ShareAlike license, unless stated otherwise. Cite this article:
Veselin Topalov Facts for Kids. Kiddle Encyclopedia.