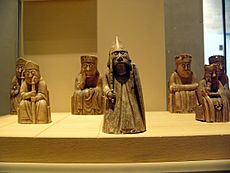 Lewis chessmen in the Museum of Scotland 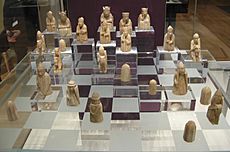 The Lewis chessmen in the British Museum 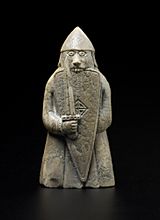 "Berserker" (as a rook), bites his shield. National Museum of Scotland

The Lewis Chessmen, or Uig Chessmen, are 78 12th-century chess pieces, most of which are carved in walrus ivory. The hoard was discovered in 1831 on the Isle of Lewis in the Outer Hebrides, Scotland. They may be some of the few complete, surviving medieval chess sets. They are owned and exhibited by the British Museum in London, which has 67 of the original pieces, and the National Museum of Scotland in Edinburgh, which has the remaining 11 pieces.

The pieces are figurative, like modern sets, and unlike the abstract Arabic pieces. The set has made the transition to European figures, which lasts to the present day. In particular, the arrival of a female figure is a departure from the Indo-Arabic game, and the figure of a bishop is also significant.

The chessmen were probably made in Norway, perhaps by craftsmen in Trondheim, in the 12th century, although some scholars have suggested other sources in the Nordic countries. During that period the Outer Hebrides, and many other Scottish islands, were ruled by Norway.

There is a broken queen piece in a similar style from an excavation of the archbishop's palace, similar carving in Nidaros Cathedral in Trondheim, the excavation in Trondheim of a kite-shaped shield similar to shields on some of the pieces and a king piece of similar design found on Hitra Island, near the mouth of Trondheim Fjord. Woolf has said that the armour worn by the chess figures includes "perfect" reproductions of armour worn at the time in Norway.

Another suggestion is that the chessmen originated in Iceland. It is not possible to decide between Norway and Iceland on the evidence available, and the date of the set is also somewhat uncertain.

Some historians believe that the Lewis chessmen were hidden (or lost) after some mishap occurred during their carriage from Norway to rich Norse towns on the east coast of Ireland, like Dublin. The large number of pieces and their lack of wear may suggest they were the stock of a trader or dealer in such pieces. Along with the chess pieces, there were 14 plain round tablemen for the game of tables and one belt buckle, all made of ivory, making a total of 93 artifacts.

After their discovery by Malcolm Macleod in 1831 they were sold on, and shown at a meeting of the Society of Antiquaries of Scotland. The chessmen were soon after split up, with 10 being purchased by a Kirkpatrick Sharpe and the rest (67 chessmen and 14 tablemen) were purchased on behalf of the British Museum in London.

Kirkpatrick Sharpe later found another bishop to take his collection up to eleven, all of which were later sold . Eventually they were bought by the Society of Antiquaries of Scotland, who donated them to the Royal Museum in Edinburgh. The eleven are now on display in the National Museum of Scotland.

The pieces given to the British Museum still exist, and most can be found in Room 42 with the registration numbers M&ME 1831, 11–1.78–159. Some have been lent to Scottish museums and temporary exhibitions. A range of resin replicas are popular items in the Museum shops.

The chessmen were number 5 in the list of British archaeological finds selected by experts at the British Museum for the 2003 BBC Television documentary Our Top Ten Treasures. They feature in the 2010 BBC Radio 4 series A History of the World in 100 Objects as number 61, in the "Status Symbols" section.

An exhibition entitled "The Lewis Chessmen: Unmasked" that included chesspieces from both the Museum of Scotland and the British Museum collections, along with other relevant objects, toured Scotland in 2010/11.

An exhibition entitled "The Game of Kings: medieval ivory chessmen from the Isle of Lewis" at The Cloisters in New York City included 34 of the chess pieces, all on loan from the British Museum. The exhibit ended April 22, 2012.

All content from Kiddle encyclopedia articles (including the article images and facts) can be freely used under Attribution-ShareAlike license, unless stated otherwise. Cite this article:
Lewis chessmen Facts for Kids. Kiddle Encyclopedia.