Kids Encyclopedia Facts
This page is about the chess player. For the singer and choir director, see Nigel Short (singer).

Nigel David Short MBE (born 1 June 1965) is an English chess grandmaster, columnist, coach, and commentator, who is the vice-president of FIDE since October 2018. Short earned the Grandmaster title at the age of 19, and was ranked third in the world by FIDE from July 1988 to July 1989. In 1993, he became the first English player to play a World Chess Championship match, when he qualified to play Garry Kasparov in the World Chess Championship 1993 in London, where Kasparov won 12½ to 7½.

He was appointed Member of the Order of the British Empire (MBE) in the 1999 Birthday Honours for services to chess.

Short was born 1 June 1965 in Leigh, Lancashire. He is the second of three children (all boys) of David and Jean Short. His father was a journalist and his mother was a school secretary. He grew up in Atherton, going to St Philip's Primary School on Bolton Old Road. He studied at the independent Bolton School and Leigh College. He was a member both of Atherton Chess Club, which was founded by his father, and later of Bolton Chess Club, which had initially rejected him (aged seven) for being too young. His parents divorced when he was 13 years old. Short left school at age 17, having completed four O-levels, to focus on chess full-time. 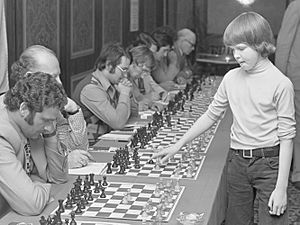 Short learned chess at age five from his father. A chess prodigy, Short first attracted significant media attention as a 10-year-old, by defeating Viktor Korchnoi, then ranked No. 2 in the world, in a simultaneous exhibition in London over 31 boards, where Short was the only victor. He was virtually self-taught. In 1977 he became the youngest ever participant in the British Chess Championship by qualifying through the North West Zonal three days before his 12th birthday. In the event itself, he defeated ten-time British champion Jonathan Penrose, and finished with 5/11, an excellent showing for a debutant. Short dominated British youth chess during this period, and earned a Master rating with his showing in the 1977 British finals. Two years later, in the British Championship at Chester, Short tied for first place with John Nunn and Robert Bellin, earning his first International Master norm; Bellin won the title on tiebreak. Later in 1979, Short tied for first place in the World Championship for players under age 16, the World Cadet Championship, at Belfort, France, but lost to Argentinian Marcello Tempone on tiebreak. He became (at the time) the youngest International Master in chess history by scoring 8/15 in the Hastings Premier in 1979/80, breaking Bobby Fischer's record from 1958. Participating in four World Junior Championships (1980–83), Short achieved his best result during his first attempt, when he placed second to Garry Kasparov in 1980 at Dortmund. Short represented England in international team play for the first time at the 1983 European Team finals in Plovdiv. He was awarded the grandmaster title in 1984, aged 19—becoming the youngest grandmaster in the world at the time, being later supplanted by Simen Agdestein.

Short's arrival on the World Chess Championship title began in earnest in 1985 when he narrowly qualified from the Biel Interzonal to become Britain's first-ever candidate. He needed a playoff to advance past John van der Wiel and Eugenio Torre for the last berth, after the three had tied in regulation play. But the Montpellier Candidates Tournament brought Short little success, as he scored 7/15 to finish in 10th place. In the next cycle, he again qualified by winning the 1987 Subotica Interzonal with Jon Speelman. The Candidates stage had by this time reverted to its traditional match format: Short defeated Gyula Sax (+2=3) in Saint John, Canada, in 1988, but then unexpectedly lost (−2=3) to Speelman in London.

Short's next attempt proved his most successful. He defeated Mikhail Gurevich in the last round of the Manila Interzonal and finished equal third with Viswanathan Anand, behind Vassily Ivanchuk and Boris Gelfand, qualifying him as a Candidate for the third successive time. Meeting Speelman again in the 8/Final, in London, he tied a close match (+2-2=4) before edging his older opponent 1.5-0.5 in the tie-break. The 1/4 final, against Gelfand, in Brussels, was a bloodthirsty affair in which Short eventually prevailed (+4-2=2). In the semifinal, in 1992, the Englishman overcame former World Champion Anatoly Karpov (+4−2=4) in a match that was described as "the end of an era". In the final, in San Lorenzo de El Escorial, Short defeated Dutchman Jan Timman (+5−3=5) to earn the right to meet defending World Champion Garry Kasparov. The King walk, perhaps the most famous in recent history, where Nigel Short defeated Jan Timman in Tilburg in 1991, was voted as one of the hundred greatest chess games in a list compiled by FM Graham Burgess, and GMs John Nunn and John Emms.

According to Short and Kasparov, the head of the chess world's governing body FIDE, Florencio Campomanes, in breach of FIDE rules, decided the location of the match (Manchester) and the prize fund without consulting them. In her book Nigel Short: Quest for the Crown (Cadogan 1993), the British WIM and author Cathy Forbes wrote that at no time in the 1993 bidding process did FIDE actually receive a conforming world championship match bid. In response, Short and Kasparov promptly formed a rival organisation, the Professional Chess Association. The resulting match—sponsored by The Times newspaper—was held under the new body's auspices in London from September to October 1993. Kasparov won convincingly (+6−1=13) – the largest margin of victory in a world title contest since Botvinnik defeated Tal in 1961. 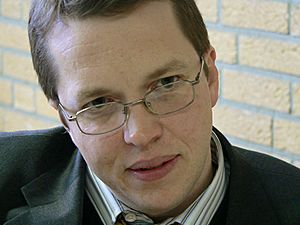 Short at the 2005 Corus chess tournament

Short won the 50th edition of the Canadian Open Chess Championship in Ottawa in 2013, edging Canadian Grandmaster Eric Hansen on tiebreak after both finished with unbeaten 7½/9 scores.

Arguably Short's finest tournament performance came at the Amsterdam VSB tournament in 1991, where he tied for first place with Valery Salov ahead of both Kasparov and Karpov.

In a return to Tehran in March 2013, Short played a second match against the Iranian player Ehsan Ghaem Maghami. Billed as Talking Chess, the contest comprised four games with a classic time control, four games of rapid chess and eight games of blitz. As the classic games progressed, the players gave an intermittent live commentary, aimed at increasing the understanding of the live and television audiences, who could contrast and compare the player's own thoughts and assessments. Short won the classic games (+2=2), the rapid games (+3−1) and the blitz games (+3−2=3).

Short made his international team debut in the European Team Chess Championship at age 17 at Plovdiv 1983. He represented England in 17 consecutive Olympiads between 1984 and 2016. Short's main highlights are: team silver medals in the chess Olympiads of Thessaloniki 1984, Dubai 1986 (where he also took gold medal for the best individual performance on board three) and Thessaloniki 1988. He took a team bronze in the Novi Sad Olympiad of 1990, and led England to fourth-place finishes in both 1994 and 1996. He led the English team to victory in the 1997 Euroteams at Pula, and was a member of the bronze winning team in 1992, and of fourth place teams in 1983 and 2001. He was a member of three English teams in the World Team Chess Championships of 1985 (team bronze), 1989 (team bronze), and 1997 (team fourth). His complete log when representing England in major international team events follows.

Short was appointed to serve as one of several Vice Presidents of the World Chess Federation (FIDE) in October 2018. He has written chess columns and book reviews for the British newspapers The Sunday Times, The Daily Telegraph, the Daily Mail and The Spectator. He wrote for The Sunday Telegraph for a decade and for The Guardian between 2005 and 19 October 2006. He reported on the FIDE World Chess Championship 2005 in San Luis, Argentina, for the ChessBase website. He wrote a column, "Short Stories", for New in Chess magazine from January 2011 until December 2018. During the World Chess Championship 2013 he wrote a series of articles for The Indian Express. In 2014 he began writing a column for the Financial Times, interviewing Sol Campbell in the first article.

He has individually coached young prodigies Pentala Harikrishna, Sergey Karjakin, David Howell and Parimarjan Negi. He worked as national coach of the Islamic Republic of Iran from 2006 to 2007. His first assignment led to their unexpectedly capturing a team bronze medal at the Asian Games in Doha, Qatar, in 2006. In the nine chess events at the Asian Indoor Games in Macau 2007, Iran took a silver and two bronze medals.

Short was made an honorary Fellow of the then Bolton Institute of Higher Education in 1993, and was admitted to the honorary degree of Doctor of Science by the University of Bolton in 2010. In 1999 he was appointed MBE, in recognition of his chess accomplishments. In August 2005, he was unanimously elected secretary general of the Commonwealth Chess Association. He became its president in June 2006, stepping down in January 2008. He was the FIDE delegate for the ECF between 2009 and 2014.

During important chess events in recent years, Short is often engaged for commentary as part of live broadcasts on the Internet. Chess historian Edward Winter has named him one of the top five Internet broadcasters.

In the Introduction chapter of his book Winning, published in 2021, Short said "This is my first book, and it has taken a global pandemic for me to write it" and "I must confess that all books with my name on the cover – and with profound apologies to those who bought them – were all ghost-written".

In 2001, Short told The Sunday Telegraph chess column that he believed he had been secretly playing the reclusive former chess champion Bobby Fischer on the online chess platform Internet Chess Club in speed chess matches. Fischer denied ownership of the account.

In January 2007, Short gave an interview to the Indian newspaper DNA, in which he called for an inquiry to examine allegations that Veselin Topalov cheated during the World Championship in San Luis.

In the same DNA interview, Short was critical of the role of members of the Appeals Committee at the 2005 and 2006 World Championships, in particular FIDE Vice President Zurab Azmaiparashvili, whom he described as "singularly inappropriate for such work having, by his own admission, cheated in winning the 2003 European Championship." Azmaiparashvili filed a formal complaint to the FIDE Ethics Commission, which convened in July 2007. While dismissing the main complaints against Short, the commission sanctioned him for a minor violation of the FIDE Code of Ethics for his use of the word "dunderhead".

In 2015, Short was criticised for saying that men are biologically better suited to chess than women, he also stated that women are better in other areas.

Short resides in Greece, and married drama therapist Rhea Argyro Karageorgiou in 1987. The couple have two children. He is an atheist.

All content from Kiddle encyclopedia articles (including the article images and facts) can be freely used under Attribution-ShareAlike license, unless stated otherwise. Cite this article:
Nigel Short Facts for Kids. Kiddle Encyclopedia.