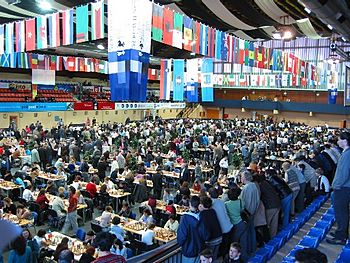 Chess Olympiads are chess events open to all national teams. They have been run since 1927 by the world chess organisation, FIDE. Since 1950, they have been run every two years. Earlier events were all-play-all. Then, as numbers grew, a system of qualifying sections were used. In recent times, the format has been a Swiss system. This, in chess terms, is a method whereby opponents are chosen each round to have similar scores. It has been widely used for individual tournaments.

Chess is a recognized sport by the International Olympic Committee with FIDE being the recognized International Sports Federation for chess since June 1999. As a member of the International Olympic Committee, FIDE adheres to its rules, including controversially having doping tests. The prospects of chess becoming an Olympic sporting event at some future date remain unclear. The naming of FIDE's team championship as the "Chess Olympiad" is of historical origin and implies no connection between this event and the Olympic Games.

The next Chess Olympiad will be held in 2014 in Norway.

* In 1936 FIDE refused its approval on grounds of Nazi anti-semitism; however, the organisers accepted Jewish players, and many did play in the event.

* In 1976 the USSR and other communist countries did not compete for political reasons.

All content from Kiddle encyclopedia articles (including the article images and facts) can be freely used under Attribution-ShareAlike license, unless stated otherwise. Cite this article:
Chess Olympiad Facts for Kids. Kiddle Encyclopedia.