He was an electrical engineer, one of the few chess masters who achieved distinction in another career while playing top-class competitive chess.

Botvinnik was the first world-class player to develop within the Soviet Union. This put him under some political pressure, but also gave him considerable influence within Soviet chess. He played a major role in the design of the World Chess Championship system after World War II. After his retirement as a player he coached a few select pupils. They included three future World Champions Anatoly Karpov, Garry Kasparov and Vladimir Kramnik. 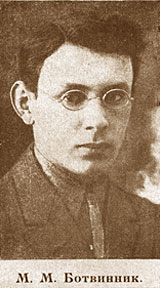 Mikhail Moiseyevich Botvinnik was born near St. Petersburg into a Jewish family. His father was a dental technician, and a cantor (hazzan) in the local synagogue. His mother was a dentist, which allowed the family to live outside the Pale of Settlement to which most Jews in Russia were restricted at the time. As a result, Mikhail Botvinnik grew up in Saint Petersburg's Nevsky Prospekt.

His father forbade the speaking of Yiddish at home, and Mikhail and his older brother Issy attended Soviet schools. Mikhail Botvinnik later said, "I am a Jew by blood, Russian by culture, Soviet by upbringing".p178

To test the strength of Soviet chess masters, Nikolai Krylenko organized the Moscow 1925 chess tournament. On a rest day during the event, world champion José Raúl Capablanca gave a simultaneous exhibition in Leningrad. Botvinnik was selected as one of his opponents, and won their game.

Botvinnik was admitted in 1928 to Leningrad University's Mathematics Department. In January 1929, he played for Leningrad in the student team chess championship against Moscow. Leningrad won and the team manager got Botvinnik a transfer to the Polytechnic's Electromechanical Department.

His early progress was fairly rapid. He won the Leningrad Masters' tournament in 1930 with 6½/8, following this up the next year by winning the Championship of Leningrad by 2½ points over former Soviet champion Peter Romanovsky. 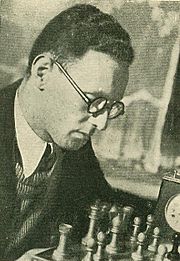 In 1931, at the age of 20, Botvinnik won his first Soviet Championship in Moscow, scoring 13½ out of 17. In late summer 1931, he graduated with a degree in Electrical Engineering. In 1933, he repeated his Soviet Championship win, in his home city of Leningrad, with 14/19.

Soon afterwards Ilyin-Genevsky, one of the older masters and a member of the Soviet embassy in Prague, arranged a match between Salo Flohr and Botvinnik. Botvinnik fell two games behind by the end of the first six, played in Moscow. However, aided by his old friend Viacheslav Ragozin and coach Abram Model, he levelled the score in Leningrad and the match was drawn. When describing the post-match party, Botvinnik wrote that at the time he danced the foxtrot and charleston to a professional standard.

In his first tournament outside the USSR, the Hastings International Chess Congress 1934–35, Botvinnik achieved only a tie for 5th-6th places, with 5/9. He wrote that, in London after the tournament, Emanuel Lasker said his arrival only two hours before the first round began was a serious mistake and that he should have allowed ten days for acclimatization. Botvinnik wrote that he did not make this mistake again.

Botvinnik came first equal with Flohr, ½ point ahead of Lasker and one point ahead of José Raúl Capablanca, in Moscow's second International Tournament, held in 1935. After consulting Capablanca and Lasker, Krylenko proposed to award Botvinnik the title grandmaster, but Botvinnik objected that "titles were not the point". However, he accepted a free car and a 67% increase in his postgraduate study grant, both provided by the People's Commissariat of Heavy Industry. 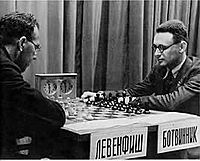 An even stronger double-round tournament was played in Moscow in June 1936, and Botvinnik finished second, one point behind Capablanca and 2½ ahead of Flohr.

In early winter, 1936, Botvinnik was invited to play in a tournament at Nottingham, England. Krylenko authorized his participation and, although his Soviet rivals forecast disaster for him, he scored an undefeated shared first place (+6 =8) with Capablanca, ½ point ahead of the then World Champion Max Euwe and rising American stars Reuben Fine and Samuel Reshevsky, and 1 point ahead of ex-champion Alexander Alekhine. This was the first tournament victory by a Soviet master outside his own country. When the result reached Russia, Krylenko drafted a letter to be sent in Botvinnik's name to Stalin. On returning to Russia Botvinnik discovered he had been awarded the "Mark of Honour". Later, in 1937, Botvinnik drew a match of thirteen games against Grigory Levenfish.

Botvinnik won further Soviet Championship titles in 1939, 1944, 1945, and 1952, bringing his total to six – a record he shares with Mikhail Tal. In 1945 he dominated the tournament, scoring 15/17; in 1952 he tied with Mark Taimanov and won the play-off match. In post-Soviet Russia the championship is somewhat less strong, as entrants from the non-Russian countries are lacking. All the same, it is still the strongest national championship in the world, and Peter Svidler has won it six times.

Botvinnik influenced the design of the system which would be used for World Championship competition from 1948 to 1963. Viktor Baturinsky wrote "Now came Botvinnik's turn to defend his title in accordance with the new qualifying system which he himself had outlined in 1946".

On the basis of his strong results during and just after World War II, Botvinnik was one of five players to contest the World Chess Championship 1948, which was held at The Hague and Moscow. He won the tournament convincingly, with a score of 14/20, three points clear, becoming the sixth World Champion. Botvinnik then held the title, with two brief interruptions, for the next fifteen years, during which he played seven world championship matches.

Botvinnik played no formal competitive games after winning the 1948 match tournament until he defended his title. In 1951, he drew with David Bronstein over 24 games in Moscow, +5 =14 -5, keeping the world title. He struggled to draw this match with Bronstein, and had (by his standards) weak tournament results. Botvinnik did not play in the Soviet team that won the 1952 Chess Olympiad in Helsinki: the players voted for the line-up and placed Botvinnik on second board, with Keres on top board; Botvinnik protested and refused to play. Keres' playing record from 1950 to early 1952 had been outstanding. 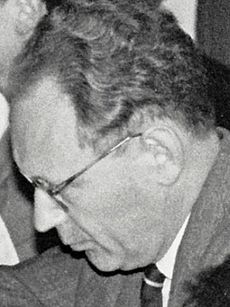 In 1954, he drew with Vasily Smyslov over 24 games at Moscow, +7 =10 -7, again retaining the title. In 1957, he lost to Smyslov by 9½–12½ in Moscow, but the rules then in force allowed him a rematch without having to go through the Candidates' Tournament, and in 1958 he won the rematch in Moscow; Smyslov said his health was poor during the return match. In 1960, Botvinnik was convincingly beaten 8½-12½ at Moscow by Tal, now 23 years old, but again exercised his right to a rematch in 1961, and won by 13–8 in Moscow. Botvinnik's play was better than in the 1960 match, mainly due to thorough preparation. Botvinnik changed his style in the rematch, avoiding the tactical complications in which Tal excelled and aiming for closed positions and endgames, where Tal's technique was not so outstanding. Also, Tal's health was variable. Finally, in 1963, he lost the title to Tigran Petrosian, by 9½-12½ in Moscow. FIDE had by then changed the rules, and he was not allowed a rematch. The rematch rule had been nicknamed the "Botvinnik rule", because he twice benefited from it.

In 1970, Botvinnik retired from competitive chess, and he worked on chess-playing software. There was no significant result from this, but his work as a coach to top young players bore fruit. He died of pancreatic cancer in Moscow.

All content from Kiddle encyclopedia articles (including the article images and facts) can be freely used under Attribution-ShareAlike license, unless stated otherwise. Cite this article:
Mikhail Botvinnik Facts for Kids. Kiddle Encyclopedia.