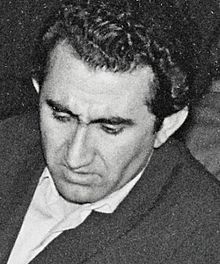 Petrosian got the USSR national master title in 1947, and his chess improved rapidly when he moved to Moscow that year. By coming second in the 1951 USSR championship he qualified for the FIDE Interzonal tournament in Stockholm next year. There, he qualified for the World Championship Candidates tournament in Zurich 1953. He came fifth, and was awarded the title of International Grandmaster.p299

Years followed when he made no visible progress, and others had the chance to challenge for the world title. Vasily Smyslov and Mikhail Tal both won the world title, yet lost it back to Botvinnik in return matches. At last, in 1962, Tigran won the Candidates tournament, and became the new challenger to Botvinnik. Petrosian also won the very strong Soviet Championship four times, in 1959 (Tbilisi), 1961 (Moscow), 1969 (Moscow), and 1975 (Yerevan).p118

Before the title match started, FIDE changed the rules so that somebody who lost the world championship in a match would not automatically get a return match. The rule that allowed for return matches had been criticised for giving Botvinnik too great an advantage over his rivals.

In the match Petrosian started shakily, losing the first game and just escaping with a draw in the second game. From then on he was in control, and won the match (best of 24 games) by +5 –2 =15. In 1966 he defended the title against Boris Spassky, and won 12½–11½. The victory was rather more emphatic than the score suggests. In 1969 Spassky was again the challenger, and this time Petrosian lost 10½–12½.

Petrosian played in every world championship cycle from 1951 to 1980, when he lost a quarter-final match against his old enemy, Viktor Korchnoi.

Petrosian's record in Chess Olympiads was unsurpassed. He played for the USSR in nine Olympiads, and this is a summary of his overall results: +79 –1 =50.p156–8

Petrosian was one of those players who set out to stifle the opponent's chances before they take action themselves. He was a student of Nimzovich's ideas of prophylaxis. Capablanca was another such player, but his chess was pure and simple. Petrosian's was profound and complex. He has been much admired by grandmasters, but was not so popular with lesser players. Like Capablanca, he was somewhat lazy, and did not strive to win every game. At his peak, he was the best player in the world at manoeuvring in complex positions, and an outstanding endgame player.p300

All content from Kiddle encyclopedia articles (including the article images and facts) can be freely used under Attribution-ShareAlike license, unless stated otherwise. Cite this article:
Tigran Petrosian Facts for Kids. Kiddle Encyclopedia.