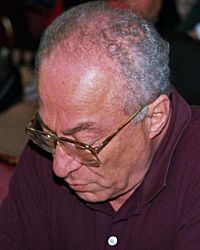 In 1976 Lein emigrated to the United States, finishing equal first with Leonid Shamkovich in the U.S. Open, and equal first with Bernard Zuckerman in the World Open chess tournament that year. He also played on the U.S. team in the 1978 Chess Olympiad.

In 2005 he was inducted into the World Chess Hall of Fame in Miami.

All content from Kiddle encyclopedia articles (including the article images and facts) can be freely used under Attribution-ShareAlike license, unless stated otherwise. Cite this article:
Anatoly Lein Facts for Kids. Kiddle Encyclopedia.