Ivkov represented Yugoslavia 12 times in Olympiad competition, from 1956 to 1980, and six times in European Team Championships.

Ivkov won numerous top-class events during his career; notable tournament triumphs include Mar del Plata 1955, Buenos Aires 1955, Beverwijk 1961, Zagreb 1965, Sarajevo 1967, Amsterdam-IBM 1974, and Moscow 1999. For more than 15 years from the mid-1950s, he was the second-ranking Yugoslav player, after Svetozar Gligorić.

He has written his autobiography: My 60 Years in Chess.

Ivkov earned his National Master title in 1949 at age 16, by placing shared 4th–7th in the Yugoslav Championship at Zagreb, with 11/19; the winner was Svetozar Gligorić. Ivkov earned his first international event opportunity at Bled 1950, sharing 5th–6th places with 7½/14; the winner was Miguel Najdorf. In this tournament, which featured some of the world's best players, Ivkov defeated well-known stars such as Herman Pilnik, Milan Vidmar Sr., and Vasja Pirc. After this impressive debut, he was selected to represent Yugoslavia in team matches against the United States and the Netherlands in 1950 and against West Germany in 1951.

Ivkov won the inaugural World Junior Chess Championship in 1951 at Birmingham; this tournament was established for players under age 20. He continued his progress with two solid showings in Yugoslav Championships: at Sarajevo 1951 he tied 10th–12th places with 9½/19 (winner Braslav Rabar), and at Belgrade 1952 he tied 7th–9th places with 10/19 (winner Petar Trifunović). At Opatija 1953, Ivkov scored 10/17 for a shared 4th–6th place; the winner was Aleksandar Matanović. Ivkov was still eligible by age in 1953 to try to repeat his World Junior success; at Copenhagen he won his preliminary group with 7/9, but scored only 3½/7 in the finals to place tied 3rd–4th, as Oscar Panno and Klaus Darga tied at the top.

Ivkov shared 4th–5th places at Belgrade 1954 with 11½/19; this was his strongest event to date, the first Yugoslav event to welcome Soviet players following the end of World War II. The winner was David Bronstein. Ivkov earned the International Master title.

Ivkov broke through into the group of the world's elite players with two brilliant results in strong tournaments in Argentina. He won at Mar del Plata 1955 with 11½/15, ahead of Najdorf, Gligoric, Szabo, Luděk Pachman, Panno and Pilnik. Then he won again at Buenos Aires 1955 with 13/17, ahead of Gligoric, Pilnik, Laszlo Szabo, Bisguier, Luděk Pachman, Rosseto, Panno and Donner. In the Yugoslav Championship at Novi Sad 1955, Ivkov had his best national result to date with a shared 3rd–4th place on 10½/17; the winner was Karaklajic. Then at Zagreb 1955, he tied 2nd–3rd places with Matanovic on 12½/19; the winner was Vasily Smyslov. Ivkov earned his Grandmaster title in 1955.

At Hastings 1955–56, Ivkov finished 3rd with 6½/9 behind winners Viktor Korchnoi and Friðrik Ólafsson. He represented Yugoslavia in the World Students' Olympiad at Uppsala 1956; on board two he scored 5/9 (+2 =6 −1), and Yugoslavia won the team bronze medals. 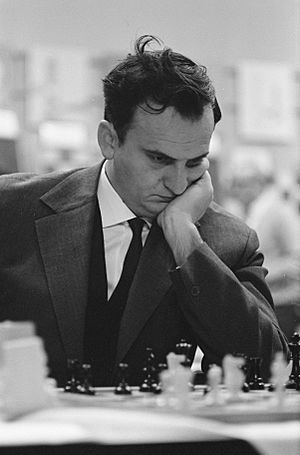 Ivkov earned the first of his 12 selections to the Yugoslav Olympiad team in 1956, and was a member of the national team continuously through 1980. This was during a period when Yugoslavia was usually among the top three chess countries. He won a total of ten team medals and five board medals during his career.

Ivkov made his first appearance at the European team level in the inaugural event at Vienna 1957, and was chosen on five further occasions. He won four team medals and one board medal in Euroteams events. According to the site olimpbase.org, Ivkov's totals in Euroteams play are (+10 =29 −4), for 57 per cent.

Ivkov narrowly missed becoming Yugoslav champion at Sombor 1957 when he scored 14/22 to share 2nd–4th places behind Gligoric. But he had a setback at the 1957 Wageningen Zonal tournament, failing to qualify for the Interzonal stage by making only 8½/17 for 9th position. He recovered with his first Yugoslav title at Sarajevo 1958, sharing the title with Gligoric on 12½/19. This victory set off a string of tournament triumphs over the next five years. Ivkov won at Sarajevo 1958 with 7/11. He won at Belgrade 1959 by 2½ points with 9/11. In a strong field at Dresden 1959, he shared 3rd–4th places with 10/15 behind winners Efim Geller and Mark Taimanov. Ivkov shared the win at Lima 1959 with Pachman on 10½/13, and again shared the win at Santiago 1959 with Pachman. At Mar del Plata 1959, he shared 3rd–4th places with Bobby Fischer, behind winners Pachman and Najdorf.

Ivkov qualified from the 1964 Amsterdam Interzonal to the Candidates' matches the next year, with a score of 15/23. But he lost his first-round Candidates' match at Zagreb to Bent Larsen by 5½–2½. He played at the Interzonal level four more times, but did not advance further. He narrowly missed moving on at age 46 in 1979.

Ivkov played board ten in the Russia (USSR) vs Rest of the World team match at Belgrade 1970, but lost his match 3–1 to Paul Keres.

At Havana 1965, Ivkov shared 2nd–4th places with Geller and Fischer, and defeated Fischer for the second time in their game; the winner was Smyslov. In fact he was leading before he blew an easily won game against a tail ender; this would have been his greatest victory. Ivkov shared 2nd–3rd places in the Yugoslav Championship at Titograd 1965 with 11½/18 as Gligoric won. Then at Zagreb 1965, Ivkov scored perhaps his most impressive career victory, sharing the title with Wolfgang Uhlmann on 13½/19, ahead of World Champion Tigran Petrosian, Lajos Portisch, Larsen, and Bronstein. Ivkov won at Venice 1966 with 5/7. He ended 4th at Beverwijk 1966 on 10/15 as Polugaevsky won. Ivkov won at Eersel 1966 with 4/5. He had a disappointing result at the elite Piatigorsky Cup tournament at Santa Monica, California, finishing with a minus score, as Spassky won. But then he nearly won the 1966 Open Canadian Chess Championship at Kingston. He shared 3rd–4th at Sarajevo 1966 with 10/15, behind winners Mikhail Tal and Dragoljub Ciric. He was 4th at Palma de Mallorca 1966 with 9½/15 behind winner Tal.

In the Yugoslav Championship at Kraljevo 1967, he ended tied 2nd–6th behind winner Milan Matulović. At Maribor 1967, he shared 3rd–5th places with 9/15, with Wolfgang Unzicker winning. He was 6th at Palma de Mallorca 1967 with 10/17, with Larsen winning. Then he shared the title at Sarajevo 1967 on 10½/15 with Leonid Stein. Ivkov won the Zonal tournament at Vrnjačka Banja 1967 with 12/17 to qualify for the Interzonal later that year. He shared the title at Málaga 1968 with Dražen Marović on 7½/11. From the Raach Zonal 1969, he advanced to the Interzonal after sharing 2nd–5th places with Portisch, Jan Smejkal, and Ulf Andersson, then winning a further playoff. He was 3rd at Vršac 1969 with 9½/15 behind winner Dragoljub Janosevic. 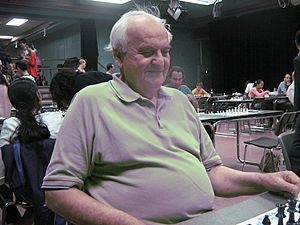 Ivkov fell out of the top 40 after 1975, and appeared less frequently in major events. But he still had some notable results later in his career. He was 2nd at Štip 1977 with 8½/13, behind Hort. At Bor 1984, he shared 2nd–4th places with 8½/13 behind winner Slobodan Martinovic. He won the traditional Capablanca Memorial tournament, played at Cienfuegos in 1985 with 10/13. In the 1991 Yugoslav Championship at Kladovo, he shared 4th–7th places with 9/13. Ivkov shared 2nd–9th places in the 1998 World Senior Championship at Grieskirchen on 8/11 behind champion Vladimir Bagirov. His most impressive late-career feat was a shared 1st–2nd place in the strong Tigran Petrosian Memorial at Moscow 1999 with 5/9, along with Portisch. Ivkov tied 2nd–4th places in the 25th anniversary Paul Keres Memorial at Vancouver with 7½/10, behind winner Vladimir Epishin. He was awarded the International Arbiter title in 1986.

Ivkov defeated five World Champions: Vasily Smyslov, Mikhail Tal, Tigran Petrosian, Bobby Fischer, and Anatoly Karpov. He also scored wins over most of the top players of his era, except Mikhail Botvinnik and Paul Keres. Head-to-head, he was dominated by such stars as Gligoric, Tal, and Larsen.

Ivkov's style is classical, and he opened regularly with both 1.e4 and 1.d4 during his peak years, making him problematic to prepare for. As Black, he replied to 1.e4 with the Sicilian Defence, the French Defence, and 1...e5, showing a wide repertoire which he handled well. While usually tending toward solid positional play, Ivkov could switch to fierce tactics when given the opportunity. During his peak years, he played in many high-class tournaments, and was almost always near the top of the table.

All content from Kiddle encyclopedia articles (including the article images and facts) can be freely used under Attribution-ShareAlike license, unless stated otherwise. Cite this article:
Borislav Ivkov Facts for Kids. Kiddle Encyclopedia.