Kids Encyclopedia Facts
In this article, the patronymic is Petrovich and the family name is Geller.

Geller was coach to World Champions Boris Spassky and Anatoly Karpov. He was also an author.

Geller grew up in Odessa, USSR, and was Jewish. He was a fine basketball player, and earned his doctorate in physical education before specialising in chess. His development as a top player was delayed by the inception of World War II.

Geller's first notable result was sixth place in the 1947 Ukrainian SSR Chess Championship at Kiev with 9½/15; the winner was Alexei Sokolsky. He shared 3rd–5th places at Baku 1948 with 9/15, an event won by Jüri Randviir. Geller scored 11/18 at the 1948 Ukrainian SSR Championship in Kiev for a shared 5th–8th place; the winners were Sokolsky and Poliak. 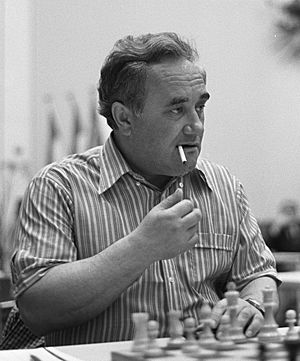 Geller began to make his mark in the late 1940s, as he won the USSR Championship semifinal qualifier at Tbilisi 1949 with 11½/16, thus advancing to the final later that year. His finals debut was sensational at URS-ch17 at Moscow; as a virtual unknown he tied for 3rd–4th places with 12½/19, behind only winners David Bronstein and Vasily Smyslov. Geller defeated such established players as Semyon Furman, Isaac Boleslavsky, Alexander Kotov, Salo Flohr, fellow finals debutant Tigran Petrosian, Viacheslav Ragozin, and Grigory Levenfish. Despite this showing, he was obliged to return to the semifinal level the next year, but advanced with a third-place finish in the 1950 qualifier at Kiev with 9/15. At URS-ch18 at Moscow 1950, Geller made 9/17 for a shared 7th–10th place; the winner was Paul Keres. Also in 1950, Geller won the Ukrainian SSR Championship in Kiev, the first of his four titles in that event; he repeated from 1957 to 1959, with all three events in Kiev. Geller in 1950 made his international debut at the Przepiorka Memorial at Iwonicz Zdroj with 11½/19 for seventh place in a powerful field; Keres won again.

Geller played in 23 USSR Chess Championships, a record equalled by Mark Taimanov, achieving good results in many. He won in 1955 at Moscow (URS-ch22) when, despite losing five games, he finished equal first with 12/19, then defeated Smyslov in the playoff match by the score of +1=6. He won his second title in 1979 at Minsk (URS-ch47) at the age of 54, making him the oldest Soviet champion.

In Seniors' competition, Geller further distinguished himself in the early 1990s. At the World Seniors' Championship, Bad Woerishofen 1991, he tied for first with Smyslov at 8½/11. Then, in the next year's Championship at the same site, Geller claimed clear first with the same score. Geller remained active in high-level competitive chess until age 70; his last event was the 1995 Russian Championship at Elista.

Geller reached the later stages of the World Championship several times. He was a Candidate at Zurich 1953 and Amsterdam 1956.

Geller's best result was in the 1962 cycle, as he finished second to Bobby Fischer at the Stockholm Interzonal. Then in the Candidates', he ended up one-half point short of playing for the title by scoring 17/27 at Curaçao, tying for second place with Keres, half a point behind Tigran Petrosian, who went on to defeat Botvinnik for the title the next year. Geller lost a playoff match to Keres at Moscow 1962 by 4½–3½, but was able to enter the 1965 Candidates' matches as a substitute when Botvinnik (defeated World Champion) declined to take part.

In the 1965 Candidates he defeated Smyslov by 5½–2½ at Moscow in the first round, but lost to Spassky by 5½–2½ at Riga in the semifinals. In a 1966 Copenhagen playoff match against Bent Larsen, the two players split eight games with two wins each, and Larsen won the first tiebreak game to secure Candidates' exemption in case of a withdrawal by a qualified player in the next cycle. (Eventually, this turned out not to matter, since none withdrew.)

In the 1968 cycle, Geller again lost to Spassky, at Sukhumi by 5½–2½, in a Candidates' first-round match. He returned to the interzonal stage in 1970 at Palma de Mallorca, and qualified as a Candidate again, losing his first match to Korchnoi at Moscow by 5½–2½. In 1973, he tied with Lajos Portisch and Lev Polugaevsky for second place at the Petropolis Interzonal, but lost out in the three-way playoff match tournament at Portorož, with two qualifying spots at stake, so he did not advance. 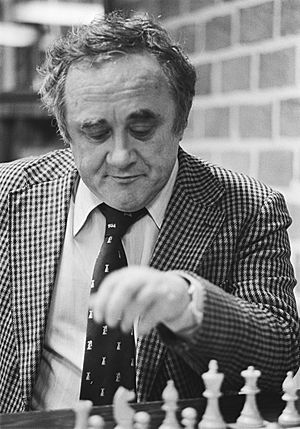 Geller represented the USSR seven times in the Chess Olympiad, over a 28-year span from 1952 to 1980, and contributed well each time to the team gold medal victories. He won three gold medals and three silver on his board. His overall score in the Olympiad play is: (+46−7=23), for 75.7 per cent.

Geller was also selected on six occasions for the USSR team to the European Team Championships. His team won gold each time, and he won four gold medals on his board. According to olimpbase.org, his overall score in Euroteams events is: (+17−1=19), for 71.6 per cent.

Note: only official tournament and match games in classical chess are counted here.

Geller is best remembered today for the tactical ability and original attacking style which characterised the earlier part of his career. In later years he became a more rounded player. He was noted as an openings expert, and was one of the pioneers in developing the King's Indian Defence to prominence, along with fellow Ukrainians Isaac Boleslavsky and David Bronstein. Geller also greatly advanced the knowledge in several variations of the Sicilian Defence, such as the quiet line with 6.Be2 against the Najdorf Variation 1.e4 c5 2.Nf3 d6 3.d4 cxd4 4.Nxd4 Nf6 5.Nc3 a6, which he used to defeat Bobby Fischer. He introduced the sharp Geller Gambit (1.d4 d5 2.c4 c6 3.Nf3 Nf6 4.Nc3 dxc4 5.e4) against the Slav Defence. He acted as second (assistant) to World Champion Boris Spassky in the World Championship match of 1972 against Bobby Fischer, and later seconded World Champion Anatoly Karpov, as well as his lifelong close friend Tigran Petrosian. His books included an autobiography, translated by Bernard Cafferty as Grandmaster Geller at the Chessboard (1969). This was later updated and reissued in 1983 under the title The Application of Chess Theory, and contains 100 well-annotated games. Former champion Botvinnik stated that, in his opinion, Geller was the best player in the world in the late 1960s. Geller seemed to be stronger in tournament play than in matches.

All content from Kiddle encyclopedia articles (including the article images and facts) can be freely used under Attribution-ShareAlike license, unless stated otherwise. Cite this article:
Efim Geller Facts for Kids. Kiddle Encyclopedia.