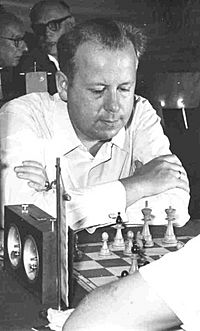 He won the German Democratic Republic (GDR) national championship 11 times from 1954 to 1986. He was the GDR's most outstanding player at the Chess Olympiads of 1956–1990, where he made 11 appearances.

At the 1964 event in Tel Aviv, he scored a combined 15 points out of 18, earning him the individual board one gold medal.

An individual bronze medal, for a combined score of 13 points out of 18, followed in 1966 at Havana.

All content from Kiddle encyclopedia articles (including the article images and facts) can be freely used under Attribution-ShareAlike license, unless stated otherwise. Cite this article:
Wolfgang Uhlmann Facts for Kids. Kiddle Encyclopedia.