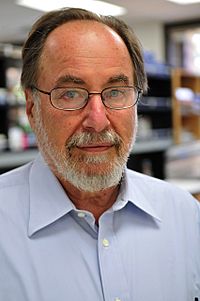 David Baltimore (born March 7, 1938 in New York City) is an American biologist. He won the Nobel Prize in Physiology or Medicine in 1975 for discovering reverse transcriptase. He shared the prize with Howard Temin and Renato Dulbecco.

The discovery of reverse transcriptase was made at the same time as Howard Temin. It overturned the central dogma of molecular biology because it showed that genetic information could traffic both ways between DNA and RNA. They published these findings in back-to-back papers in the journal, Nature.

All content from Kiddle encyclopedia articles (including the article images and facts) can be freely used under Attribution-ShareAlike license, unless stated otherwise. Cite this article:
David Baltimore Facts for Kids. Kiddle Encyclopedia.