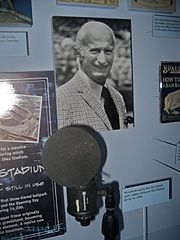 Sheppard was born on October 20, 1910 in Richmond Hill, Queens, New York. He studied at St. John's Preparatory School, at St. John's University, and at Columbia University. He was married to Margaret Sheppard until her death in 1959. They had four children. Then he was married to Mary Hoffman from 1961 until his death in 2010. Sheppard died on July 11, 2010 in Baldwin, New York from natural causes, aged 99.

All content from Kiddle encyclopedia articles (including the article images and facts) can be freely used under Attribution-ShareAlike license, unless stated otherwise. Cite this article:
Bob Sheppard Facts for Kids. Kiddle Encyclopedia.