Ozone Park is a neighborhood located in the southwestern section of the borough of Queens, in New York City, New York, United States. It borders Woodhaven, Richmond Hill, Howard Beach, and City Line, Brooklyn. Different parts of the neighborhood are covered by Queens Community Board 9 and 10. The neighborhood is located in the Sixth congressional district, and is represented by Democrat Gregory Meeks.

The northern border is Atlantic Avenue; the southern border is South Conduit Avenue, and the eastern border is 108th Street. The western border is the county line with Brooklyn (mostly along Ruby and Drew Streets). It is the home of the Aqueduct Racetrack, a popular spot for Thoroughbred racing. The neighborhood is known for its large Italian-American population.

The name "Ozone Park" was chosen for the development to "lure buyers with the idea of refreshing breezes blowing in from the Atlantic Ocean to a park-like community," with "ozone" meaning not the alternate form of oxygen, but "fresh healthy air, especially from the sea." 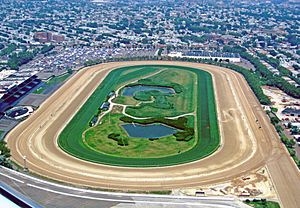 An area now part of Ozone Park that pre-dated that community was called "Centreville". It was founded in the 1840s and was centered around Centreville Street and the Centreville Community Church. Part of Ozone Park is still called "Centreville". The church merged with the United Methodist Church of Ozone Park in 1957 and a new church, the Community Methodist Church of Ozone Park, was built at the Southeast corner of Sutter Avenue and Cross Bay Boulevard. It was completed for Christmas 1958. The old church and the property that surrounded it were sold to Aqueduct Racetrack and the old, historic church was torn down in mid-1959. The lot is still vacant as of 2013.

During the 1870s, an economic depression caused residents of New York City to look for better housing opportunities in the suburbs of Manhattan and Brooklyn, where housing would be cheaper. Two partners, Benjamin W. Hitchcock and Charles C. Denton, first began carving farmland into building lots. They were able to do this because of their wealth and substantial capital. Housing was first developed in the area after the Long Island Rail Road began service through the area in 1880 as part of its route from Long Island City to Howard Beach. Ozone Park was created and settled in 1882.

Before the turn of the 20th century, there was an attempt to develop up to nine neighborhoods with the "park" title. Ozone Park was the only one of these neighborhoods that continues to exist, mostly because of the daily service at the now-defunct Ozone Park station on the Long Island Rail Road. The name persisted because of the many commuters who passed through the Ozone Park station and referred to it as an important landmark. The railroad station was also responsible for the increasing development of the neighborhood because the access to the railroad allowed people to get into the city easily, increasing its popularity among families looking to move into a suburb.

The final improvement to the local transit system was the Fulton Street Elevated train line at Liberty Avenue in 1914. In addition to this railroad station came the nickel fare, which was another major factor in the development of Ozone Park. The nickel fare gave residents the ability to travel anywhere along the railroad line for a set price of 5¢. This new fare was considered to be the "single most effective stimulus to home building"[this quote needs a citation] in the Ozone Park area because the real estate developers began buying up all the lots on either side of Liberty Avenue in hopes the new station would attract more people to want to live in Ozone Park. 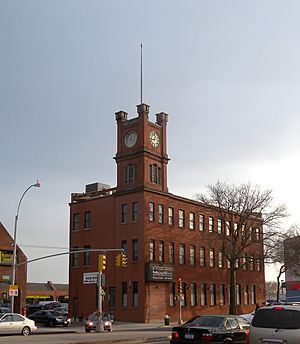 Historic clock tower built during the 1860s that is a relatively small remnant of the Lalance & Grosjean porcelain enamelware factory complex on Atlantic Avenue at north end of Ozone Park or, alternatively, the south end of Woodhaven. The factory was mostly razed in the 1980s and what remains is now "adaptively reused" as a medical clinic.

Extensive housing construction occurred in the 1920s. The houses featured enclosed front porches, open back porches and stained-glass windows in the living rooms. Most of the houses were detached or semi-detached (very close to the neighboring house, but not sharing a common wall) built to roughly the same plan, with the living room, dining room and kitchen all in line and three bedrooms and a bath upstairs. The stairs were usually in the dining room. One of the builders was named Weyerman.

Prior to 1922, Woodhaven Boulevard was the only important north-south street in town. However, it ended at Liberty Avenue. Then officials decided to expand Woodhaven Boulevard all the way south to the Rockaways and finally opened it to traffic in 1925. This made Ozone Park more accessible by both bus and car. Since cars were also becoming more popular at that time, the land became much more valuable, leading to a construction boom in an attempt to fill any empty lot. Between 1921 and 1930, Ozone Park saw a population increase of over 180% from 40,000 to 112,950 people. With this extraordinary increase in population came the need for schools and sources of entertainment. In response to this demand came the construction of John Adams High School in 1930. This school was built just as the construction boom slowed down and right before the Great Depression. Furthermore, in 1925 the development of the Cross-Bay Movie Theatre gave residents the ability to go and see a show while also connecting with neighbors.

In 1996, a scandal broke surrounding two Ozone Park Jewish cemeteries, Mokom Sholom Cemetery and Bayside Cemetery, which share a coterminous tract bounded by 80th and 84th Streets and Liberty and Pitkin Avenues with Acacia Cemetery, which was not involved. Allegations of the re-using of graves of long-dead mostly infants and small children from the mid-to-late 19th Century, for re-sale to recent Russian Jewish immigrants, were made against the owners of Mokom Sholom, and both it and Bayside had also been ravaged (Mokom Sholom more) by a combination of vandals, grave-robbers, and self-styled necromancers. The former was exposed by WABC-TV Channel 7 in a series of news items, while the latter spawned philanthropic efforts to repair the damage.

One infamous area of Ozone Park is known as "The Hole", and includes the area bounded by 75th (Ruby) Street, South Conduit Avenue, 78th Street and Linden Boulevard. It is named as such because the houses in this area were built below grade. In the 1930s, the city of New York decided to install sewers and sewer lines in Ozone Park to stop the serious flooding that was a major problem. In order to install the sewers, the houses had to be raised almost an entire floor. Owners were given a stipend to raise their homes but some chose not to do so. The first floor in some of the non-raised homes subsequently became basements. And even today, there are still a few homes that remain below grade.

Since its beginnings, Ozone Park has been largely populated by various groups of immigrants. The first wave were French immigrants associated with a pot factory on Atlantic Avenue. Germans and the Irish made up a large part of Ozone Park in the late 19th century and early 20th century. Eventually, the Italians, who are one of the largest ethnic groups in the neighborhood (giving it the name "the Little Italy of Queens"), started to migrate into Ozone Park from East New York, Brooklyn. Most of the current Italians in the neighborhood are originally from Brooklyn. Fears of changing neighborhoods caused a stir amongst the Italians that caused them to move into Ozone Park, which at the time was mostly Germans and Irish who had migrated themselves from neighboring East New York. A significant Polish population also developed based around Saint Stanislaus Bishop and Martyr Roman Catholic Church and its associated elementary school.

Census data from the early years shows how Ozone Park was a sparsely populated neighborhood because of the lack of transportation. By 1915, the Fulton Street Line opened, connecting Ozone Park with the rest of New York City, thus starting the enormous influx by the Italians. Ozone Park then formed many smaller sub-neighborhoods with specific identities. The Tudor Village section, which is still known by this name, was located on the south bordered by Pitkin Avenue and North Conduit Avenue and from east to west Cross Bay Boulevard and North Conduit Avenue. Centreville, which also still uses this name, is bordered by Aqueduct on the east, Cross Bay Boulevard on the west, North Conduit Avenue on the south, and Rockaway Boulevard on the north. Liberty Heights, which is only known by the old-timers, is a triangular area bordered by Liberty Avenue on the south, diagonal-running 101st Avenue (Jerome Avenue) from the southwest to the northeast, and Woodhaven Boulevard to the east. Balsam Village, which is also known by the old-timers, was named after Balsam Farms, which sold off parcels of land for development, and is bordered by Liberty Avenue on the north, 84th Street on the west, and Cross Bay Boulevard on the east.

At the turn of the 21st century immigrants from Latin America, South Asia (Bangladesh), the West Indies, and South America (Indo-Guyanese & Indo-Surinamese) moved in, adding a diverse atmosphere to the neighborhood, which is especially apparent along 101st Avenue and Liberty Avenue near the neighborhood's border with Richmond Hill. The neighborhood remains largely Italian-American; however, these new arrivals have made Ozone Park become one of the fastest-growing and most ethnically diverse neighborhoods in New York City. Aside from these larger groups, there is a large Hispanic population in Ozone Park, mainly concentrated in the northern portion of the neighborhood near the Woodhaven border, and an African-American minority, spread throughout the neighborhood.

Residents vary from working-class to middle-class families, who own or rent private homes on the neighborhood's tree-lined residential streets. There are pockets of wealthier areas in the southern part of the neighborhood close to the Belt Parkway. 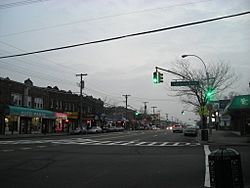 South Ozone Park is home to a more diverse population of about 45,498, with many Indians, Pakistani, Guyanese, Trinidadian, and Blacks living in the area, in addition to the area's longtime Italian-American population; Italian-Americans are most prevalent in the southern and western areas in the neighborhood near the Conduit. There has been a recent surge of development in South Ozone Park that rivals many of the surrounding communities in terms of home value. Rockaway Boulevard is South Ozone Park's main business strip. There is also a high concentration of small businesses along Liberty Avenue in nearby Richmond Hill. In 2000, the population was 7.8% white, 45.7% Asian Indian, 12.7% Hispanic, 12.8% non-Indian Asian, and 25.6% black. The Median income is $80,000, and the ZIP code is 11420.

The neighborhood, in western Ozone Park, is extremely small, consisting of approximately two hundred and fifty homes; it spans only five residential streets and two avenues. Its population consists mostly of Italian Americans. Its residents consist of approximately six hundred people, mostly families. Most of its inhabitants have lived there for many years. The village was incorporated in the late 1800s and has since flourished. Tudor Village hosts suburban tree-lined streets with what is referred to as the "Tudor Malls" in its center, boasting floral arrangements throughout. The village is also home to Tudor Park, a 20-acre (81,000 m2) recreational park which features a baseball field, racquetball courts, picnic area, and a fountain as well as a play area with slides, swings and almost everything else one would expect to find in a suburban park. Located on the southeast end of the village are another baseball field and benches and shaded areas for resting. Tudor Village is on the border of Howard Beach.

Ozone Park has served as the setting and subject of numerous media works. 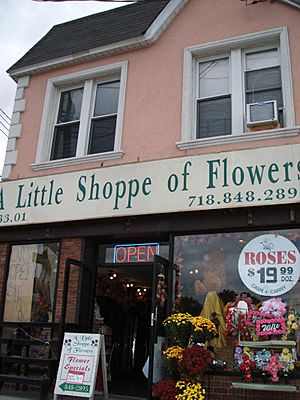 Jack Kerouac lived above this flower shop in Ozone Park.

Notable current and former residents of Ozone Park include:

All content from Kiddle encyclopedia articles (including the article images and facts) can be freely used under Attribution-ShareAlike license, unless stated otherwise. Cite this article:
Ozone Park, Queens Facts for Kids. Kiddle Encyclopedia.