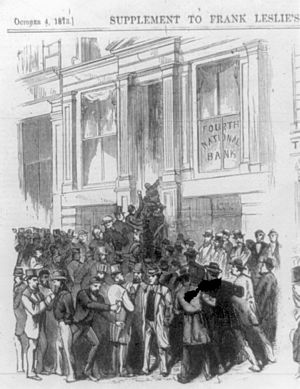 The Panic of 1873 was a financial crisis that started an economic depression in Europe and North America. It lasted from 1873 until 1877, and it went even longer in France and Britain. In Britain, for example, it started two decades of stagnation known as the "Long Depression". This weakened the country's economic leadership. In the United States the Panic was known as the "Great Depression" until the events of the early 1930s set a new standard.

All content from Kiddle encyclopedia articles (including the article images and facts) can be freely used under Attribution-ShareAlike license, unless stated otherwise. Cite this article:
Panic of 1873 Facts for Kids. Kiddle Encyclopedia.