Kids Encyclopedia Facts
This page is about the village. For the neighborhood, see Bellerose, Queens.

Bellerose is an incorporated village in Nassau County, New York, in the United States. The population was 1,193 at the 2010 census.

The Incorporated Village of Bellerose is in the Town of Hempstead, New York and borders Queens County in the City of New York.

The village was founded by Helen Marsh of Williamsburg, Brooklyn. In 1907, planning to build a model community, Marsh purchased 77 acres (310,000 m2) of Floral Park gladiola fields. The first Bellerose home was completed, under Marsh's supervision, in 1910. Marsh persuaded the Long Island Rail Road to place a station in the new village, and she named the station Bellerose. Though it has been suggested that she named the station for the Rose farm, south of the railroad, and her daughter Belle, she said that she simply found the name "euphonious". A vote of the homeowners made the name official in 1917.

Bellerose Village has its own mayor and Board of trustees. Thomas Van Buskirk served as mayor for 12 years, from 1993 until 2004. During his tenure he was responsible for the installation of the village's playground, the purchase of a new fire truck and chief's car, the re-modeling of the village hall and many other projects. 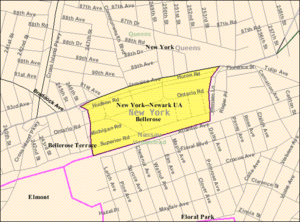 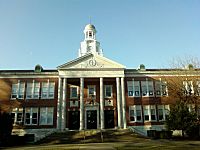 There were 378 households out of which 42.6% had children under the age of 18 living with them, 78.3% were married couples living together, 6.3% had a female householder with no husband present, and 11.9% were non-families. 9.8% of all households were made up of individuals and 5.6% had someone living alone who was 65 years of age or older. The average household size was 3.10 and the average family size was 3.32.

All content from Kiddle encyclopedia articles (including the article images and facts) can be freely used under Attribution-ShareAlike license, unless stated otherwise. Cite this article:
Bellerose, New York Facts for Kids. Kiddle Encyclopedia.