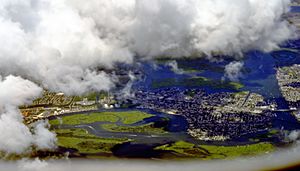 Aerial view of Barnum Island and Harbor Isle from the west.

Barnum Island is a hamlet and census-designated place (CDP) in Nassau County, New York, United States. The population was 2,414 at the 2010 census. It occupies the eastern portion of an island situated between Long Island and Long Beach. That island, previously known in its entirety as Hog Island, consists entirely of the communities of Barnum Island, Island Park, and Harbor Island. 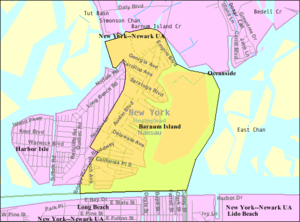 Previously called Hog Island, after the feral pigs introduced by early European explorers to the Native Americans, it was later renamed for Sarah Ann Baldwin Barnum. Between 1851 and 1870, her husband Peter owned large parcels of land on Long Island, though his primary business was a Manhattan clothier. Sarah Ann arranged the purchase of Hog Island for use as a "poor farm" – a self-supporting almshouse, a social innovation for that period, and the island was renamed in her honor.

Local lore connects the island's name to P.T. Barnum, the circus impresario, but this is incorrect, and likely due to confusion between "PT" and "PC" (Peter C.).

The county discontinued the almshouse and sold the island to developers in 1898 for $40,000.

The center part of the island was incorporated as the village of Island Park in 1926. The rest of the island remains unincorporated, with the western portion known as Harbor Island, and the northeastern portion retaining the name Barnum Island. However, all three make up the original Hog Island/Barnum Island, and are part of the Town of Hempstead.

There were 836 households, out of which 26.0% had children under the age of 18 living with them, 65.3% were married couples living together, 10.9% had a female householder with no husband present, and 19.7% were non-families. 17.0% of all households were made up of individuals, and 6.2% had someone living alone who was 65 years of age or older. The average household size was 2.86 and the average family size was 3.16.

Nunley's Ferris wheel, formerly located at Nunley's Carousel and Amusement Park on the Baldwin-Freeport, New York border, is now located in Barnum Island, in Baldwin, New York. Nassau County purchased Nunley's Carousel in 1995, restored it, and reopened it in 2009 at the Cradle of Aviation Museum in Garden City, New York. Other Nunley's rides and games were sold at auction after the park closed in 1995 and are now scattered all over the country.

All content from Kiddle encyclopedia articles (including the article images and facts) can be freely used under Attribution-ShareAlike license, unless stated otherwise. Cite this article:
Barnum Island, New York Facts for Kids. Kiddle Encyclopedia.