Sea Cliff is a village located within the Town of Oyster Bay in Nassau County, on Long Island, in New York, United States. As of the 2010 United States census, the village population was 4,995. 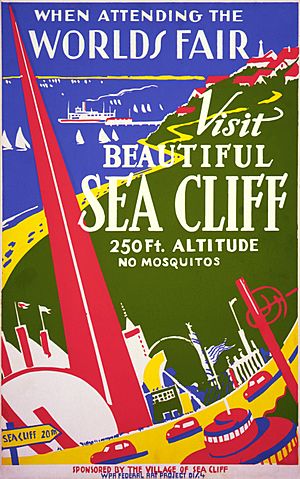 Several buildings in Sea Cliff, mostly Victorian houses, are listed on the National Register of Historic Places. Many of them were built as summer homes as part of Sea Cliff's late nineteenth century role as a resort town, and they have been collectively called "one of the best collections of late Victorian era architecture in Nassau County."

The village is part of the North Shore School District.

All content from Kiddle encyclopedia articles (including the article images and facts) can be freely used under Attribution-ShareAlike license, unless stated otherwise. Cite this article:
Sea Cliff, New York Facts for Kids. Kiddle Encyclopedia.