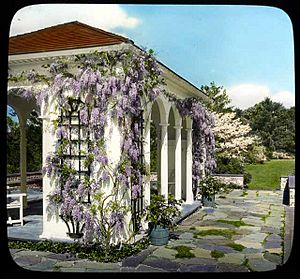 Locust Valley is a hamlet and census-designated place (CDP) located in Nassau County, New York. Locust Valley is an unincorporated area of the Town of Oyster Bay. As of the United States 2010 Census, the CDP population was 3,406. The area is commonly identified with its W.A.S.P and "White Shoe" culture surrounding a group of polo and golf clubs, primarily the secretive Piping Rock Club, as well as the equally prestigious Creek Club, in the neighboring incorporated villages of Matinecock and Lattingtown, respectively. The town is also known for Locust Valley lockjaw.

Figures ranging from the Duke of Windsor to John Lennon to Franklin D. Roosevelt have spent considerable time in Locust Valley.

The rolling hills of the north Shore of Long Island were laid down as terminal moraines by the receding glaciers of the last ice age roughly 10,000 years ago. The Algonquian tribe that settled the area, spanning from Flushing to Setauket, called the area "hilly ground" or Matinecock and as a result the Algonquian Indians who settled there became known as the Matinecock Indians.

In 1667, Captain John Underhill negotiated with the Matinecock Indians to purchase land for a settlement that he and his fellow colonists would call Buckram. The town name lasted for nearly 200 years, until in 1856 the name was changed to Locust Valley based on the number of locust trees located in the area.

On April 19, 1869, the Long Island Rail Road opened the extension of the Glen Cove line, via a single track to Locust Valley, making it the terminus of the line until the railroad was extended to its current terminus in Oyster Bay in 1889.

With the arrival of the Long Island Rail Road, a commercial center developed and thrived around the Locust Valley station and the nearby intersection of Forest Ave/Buckram Road and Birch Hill Road. As the North Shore of Long Island grew into the Gold Coast in the early 20th century, the commercial center grew to serve the great estates that were being established in the surrounding communities of Bayville, Centre Island, Lattingtown, Mill Neck, Matinecock, Muttontown and The Brookvilles.

By 1927, the wealthy Harrison Williams had established himself at his 150-acre (0.61 km2) Delano & Aldrich designed estate "Oak Point" at Bayville, on nearby Pine Island. Weekend guests (which several times included Scott Fitzgerald, the Prince of Wales, Cecil Beaton & Winston Churchill) arriving at the Locust Valley Station were often fetched in one of his fleet of Rolls Royce motorcars which would stop in the hamlet for last-moment provisions. At that time, Williams, a Wall Street tycoon, was considered the wealthiest American, and John Kenneth Galbraith wrote, in his book about the great depression, of Williams' pyramiding of utilities holding companies, "If there must be madness something may be said for having it on a heroic scale".

In the 1940s and 50s, Locust Valley was the country home of Robert A. Lovett, a partner (with Prescott Bush) in Brown Brothers Harriman Bank on Wall Street and a former United States Secretary of Defense; Elizabeth Shoumatoff, renowned portrait painter of President Franklin D. Roosevelt, and other local luminaries; and finally, Leonard Hall, The National Chairman of the Republican Party. The hamlet was also a regular stop for rest and relaxation for the Duke of Windsor and Cole Porter.

As the commercial center, with the railroad station for the surrounding Gold Coast communities, the geographically small Locust Valley became the name of reference for all surrounding areas between Glen Cove and Oyster Bay. This larger community, which now constitutes the Locust Valley School service area, was associated with the upper-class accent prevalent on the great estates: "Locust Valley Lockjaw". While the accent is not heard as much as it once was, Locust Valley remains a social center for upper-class New Yorkers. Many are members of the exclusive clubs in the area: Piping Rock Club, The Creek, Beaver Dam and the Seawanhaka Corinthian Yacht Club.

The Cock-Cornelius House, Matinecock Friends Meetinghouse, and George Underhill House are listed on the National Register of Historic Places.

There were 1,279 households out of which 33.4% had children under the age of 18 living with them, 56.1% were married couples living together, 11.2% had a female householder with no husband present, and 28.4% were non-families. 22.6% of all households were made up of individuals and 10.1% had someone living alone who was 65 years of age or older. The average household size was 2.75 and the average family size was 3.19.

All content from Kiddle encyclopedia articles (including the article images and facts) can be freely used under Attribution-ShareAlike license, unless stated otherwise. Cite this article:
Locust Valley, New York Facts for Kids. Kiddle Encyclopedia.