Albertson is a hamlet and census-designated place (CDP) in the Town of North Hempstead in Nassau County, on Long Island, in New York, United States. The population was 5,182 at the 2010 census. 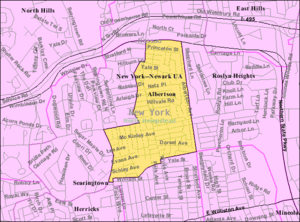 Albertson is located south of Roslyn and east of Searingtown. The boundary between Albertson & Searingtown is ill-defined, as they share the same post office and are unincorporated. In general, Searingtown refers to the area west of Searingtown Road and Albertson the area east of Willis Avenue. Searingtown School and the Searing-Roslyn United Methodist Church both use Albertson as their address.

According to the United States Census Bureau, the CDP has a total area of 0.7 square miles (1.8 km2), all land.

The first European settler was John Seren who came from Connecticut in 1644. Later Townsend Albertson started a farm and gristmill and the community became known as Albertson.

In 1850, a road was built through Albertson on the lands of Isaac Underhill Willets. The road is still known as I U Willets Road. (Willets complained that Long Island has more roads than it would ever need). The Long Island Rail Road designated an Albertson train station in 1864.

In 1946, suburbanization began with a small development by William Levitt. The last farms were developed in the mid-1960s.

The Searingtown School (now in Albertson) was one of the schools involved in the landmark Supreme Court case Engel v. Vitale (1962), which disallowed government-directed prayers in public schools. 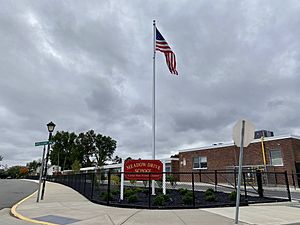 The Mineola UFSD's Meadow Drive Elementary School, which is located within the hamlet.

The Northern State Parkway forms the hamlet's northern border with Roslyn Heights. Other major roads which pass through the hamlet include I.U. Willets Road and Willis Avenue.

Additionally, the Long Island Motor Parkway used to run through the hamlet. 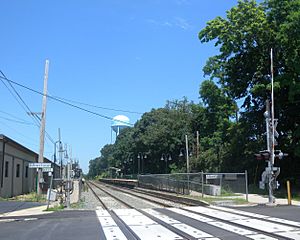 Albertson is served by the Albertson station on the Long Island Rail Road's Oyster Bay Branch.

Roslyn Estates is served by the n23 bus route, which is operated by Nassau Inter-County Express (NICE). This bus route travels along Willis Avenue through the hamlet, following the route of the former New York & North Shore Traction Company's trolley route between Mineola and Roslyn, which ran through the area in the early 20th Century.

National Grid USA provides natural gas to homes and businesses that are hooked up to natural gas lines in Albertson.

PSEG Long Island provides power to all homes and businesses within Albertson.

Albertson in its entirety is connected to the Nassau County Sewage District's sanitary sewer network.

All content from Kiddle encyclopedia articles (including the article images and facts) can be freely used under Attribution-ShareAlike license, unless stated otherwise. Cite this article:
Albertson, New York Facts for Kids. Kiddle Encyclopedia.