Stony Brook is a hamlet and census-designated place (CDP) in the Town of Brookhaven in Suffolk County, New York, United States, on the North Shore of Long Island. Begun in the colonial era as an agricultural enclave, the hamlet experienced growth first as a resort town and then to its current state as one of Long Island's major tourist towns and centers of education. Despite being referred to as a village by residents and tourists alike, Stony Brook has never been legally incorporated by the state. The population was 13,740 at the 2010 census.

The CDP is adjacent to the main campus of Stony Brook University, the largest public university in New York by area, and also The Stony Brook School, a private college preparatory school. It is also home to the Long Island Museum of American Art, History, and Carriages and the Stony Brook Village Center, a privately maintained commercial center planned in the style of a traditional New England village.

Stony Brook was first settled in the late 17th century. It was originally known by the native name Wopowog and then as Stoney Brook, with both names likely referring to the interconnected bodies of water at the hamlet's western edge. It began as a satellite community of adjacent Setauket, New York, the Town of Brookhaven's first settlement, and its land was included in the initial 1655 purchase from the native Setalcott tribe. 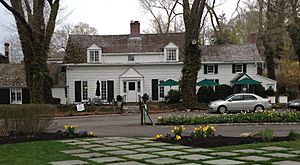 A grist mill was built in 1699 on the water body now known as the Mill Pond. The current structure, which replaced the original in 1751, ground grain into the 1940s and has since been repurposed for public tours. For religious services and education, the hamlet's original residents had to attend institutions in the neighboring communities of Setauket and St. James. In the latter half of the 18th century, activity began to shift from the mill area north toward the Harbor as new residences, a number of which still stand, were constructed.

Stony Brook was a remote area through the 18th century aside for a modest amount of commerce near the mill at the intersection of Main Street and Harbor Road. The community's development was stalled by its poorly accessible harbor relative to nearby Setauket and Port Jefferson. In the 1840s, local painter William Sidney Mount led a call for the harbor's dredging. This was completed twice, but after the harbor filled in both times the effort was abandoned. Lacking the resources of its neighboring harbor settlements, Stony Brook based its economy on agriculture and the cordwood industry.

The Long Island Rail Road reached Stony Brook in the 1870s, creating an easy link between New York City and the community. Stony Brook quickly became a popular summer resort for city dwellers attempting to escape the hazards and stress of urban life. The establishment of the Stony Brook Assembly in 1909 also helped to draw more residents to the local area. A number of these newcomers constructed houses and cottages, many of which were either originally made for year-round use or have since been converted to such. 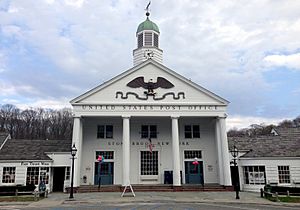 Nevertheless, the majority of residences were local farmers and businessmen who depended on all necessities being in easy reach. Most businesses were then located on the compact plot that would become the contemporary village green. Unlike today, the shops in this area were utilitarian and haphazardly arranged.

The history of the unincorporated "village" is closely linked to that of Ward Melville, a local businessman who owned what would become the CVS Corporation. At one point owned much of what his family coined as the Three Village area (consisting of Stony Brook, the hamlet of Setauket, and the incorporated village of Old Field). 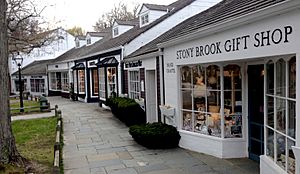 Beginning in 1939 with the creation of his Stony Brook Community Fund, Melville used his wealth to begin the transformation of part of the hamlet into his idea of an idyllic New England village, the Stony Brook Village Center, with white clapboard buildings and quaint stores. The focus had been in the previous center of the village's commerce, which now consists of a village green and a crescent of stores embellished with stone walkways and seasonal gardening. To accomplish this, Melville moved many of the existing shops in the plot into the crescent and modified their details for consistency, a design model similar to that of Colonial Williamsburg. As a centerpiece to the crescent, Melville built the Stony Brook Post Office, decorated by a large eagle that flaps its wings to mark each hour. 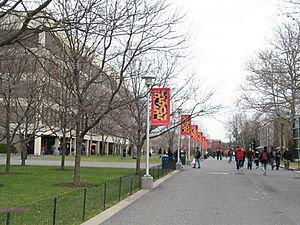 The main alley across the Stony Brook University campus 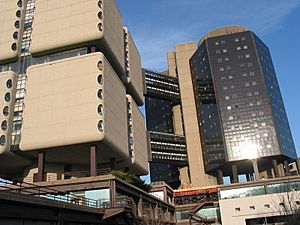 Melville donated the land and funds to New York State for establishing a branch of the State University of New York in the area. This led what was then called the State University College on Long Island, at the time in constrictive Oyster Bay quarters, to relocate and change its name to Stony Brook University. Melville also donated land and funds for the local school district. The Three Village Central School District today serves several communities in the vicinity and has named its flagship Ward Melville High School after the philanthropist. 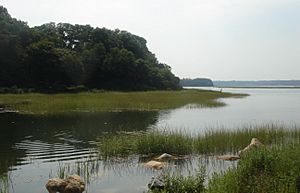 Stony Brook is located on the North Shore of Long Island, approximated 55 miles east of the New York City borough of Manhattan. The census-designated place occupies an irregular shape that is roughly 5 miles north to south and 1 mile east to west.

The historic core of Stony Brook was developed from the 17th century onward at the mouth of Stony Brook Harbor, a narrow inlet of the Long Island Sound. This section of town includes the Stony Brook Village Center, a planned commercial center in the style of New England clapboard architecture that opened in 1941. Nearby are the Long Island Museum, the Three Village Inn, and William Sidney Mount House. A peninsula in this vicinity known as the West Meadow includes a beach and wetlands reserve.

Stony Brook University is located within and adjacent to the census-designated place, with its main campus less than 2 miles from Stony Brook's historic center. It is primarily on the eastern side of the census-designated place, with a pedestrian entrance on Route 25a at the Stony Brook station of the Long Island Rail Road and a vehicular entrance on Nicolls Road. The local stretch of Route 25a contains shops and other commercial properties that cater to the university's student body.

The southern (inland) portion of Stony Brook primarily consists of post-war residential development. The Stony Brook University Research and Development Park (in Stony Brook and adjacent St. James) occupies a buffer between this section and the university's central campus. Forming Stony Brook's official southern boundary is Route 347, a corridor with commercial development including an AMC Loews cinema within the CDP boundaries and the Smith Haven Mall nearby.

The Stony Brook station of the Long Island Rail Road Port Jefferson Branch is in the area. Commute time to Penn Station is approximately 1 hr 48 mins including a transfer in Huntington, Hicksville or Jamaica. 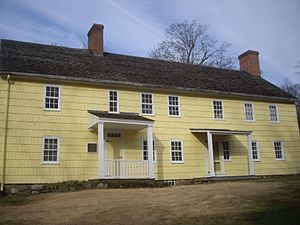 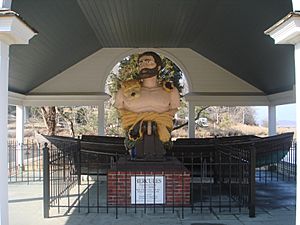 There were 4,758 households, out of which 39.2% had children under the age of 18 living with them, 71.3% were married couples living together, 6.3% had a female householder with no husband present, and 20.4% were non-families. 16.2% of all households were made up of individuals, and 9.1% had someone living alone who was 65 years of age or older. The average household size was 2.88 and the average family size was 3.23.

Stony Brook is well known as the home and namesake of The Stony Brook School, a prep school, and Stony Brook University.

The hamlet is served by the Three Village Central School District. The rapid growth of residential development in the past decade has begun to place serious strain on schools trying to accommodate the increasing class size. However, the Three Village schools are generally ranked comfortably above average. 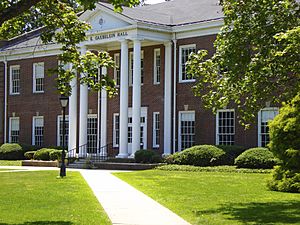 All content from Kiddle encyclopedia articles (including the article images and facts) can be freely used under Attribution-ShareAlike license, unless stated otherwise. Cite this article:
Stony Brook, New York Facts for Kids. Kiddle Encyclopedia.