East Hills is a village in Nassau County, on the North Shore of Long Island, in New York, United States. It is considered part of the Greater Roslyn area, which is anchored by the Incorporated Village of Roslyn. The population was 6,955 at the 2010 census.

The village of East Hills, New York, was incorporated on June 24, 1931, and held its first election on July 8 that same year. But even before it was incorporated, East Hills has been a part of the recorded history of the United States since 1643. In that year, the Rev. Robert Fordham and John Carman sailed across Long Island Sound from Stamford, Connecticut and purchased what we now know as the towns of Hempstead and North Hempstead from the Rockoway, Mericock, Marsappeaque and Matinecock Indians.

Settlers came the following year and named the area Hempstead, in honor of their home city, Hemel Hempstead in England. The area fell in relative obscurity for about a century after that.

East Hills cannot boast that George Washington ever slept here, but his diary does refer to an Oyster Bay visit, and of his breakfast at what we now know as the George Washington Manor on Old Northern Boulevard in Roslyn. We also know that President Washington inspected the paper mill in Roslyn park, and it certainly doesn't take much imagination to have the Father of Our Country riding, or walking, the 100 yards to what was to become East Hills.

Perhaps the one thing in East Hills which has been in existence longer than any other man-made object is Harbor Hill Road in East Hills. "A path alongside Harboure Hill" is mentioned in records dating back to 1661.

For many years, much of what now is East Hills was the home of a few wealthy families. The neighborhood now known as Fairfield Park was once a polo field. The Country Estates neighborhood was the home of the Clarence Mackay family for 30 years and known as Harbor Hill, starting in 1898. The Prince of Wales, who later abdicated the throne of the England to marry Mrs. Simpson, was entertained at the Mackay estate in 1924. And Charles A. Lindberg rested at the Mackay estate after his return to the United States following his historic solo flight to France in 1927. Three remaining buildings from the Harbor Hill estate were listed on the National Register of Historic Places in 1991: Mackay Estate Dairyman's Cottage, Mackay Estate Gate Lodge, and Mackay Estate Water Tower.

On June 24, 1931, representatives of the 269 people living in the village-to-be met in the home of Robert H. Willets, whose family lived in the area for eight generations. The Willets family then lived in the house where Stephen Taber, one of the great names in Roslyn's early history, resided in 1839. The house still stands at 50 Andover Road, off the Long Island Expressway's South Service Road near the entrance to the Norgate neighborhood. The name "East Hills" was adopted at the suggestion of H. Stewart McKnight, who was then the Nassau County Attorney.

Two weeks after the incorporation, an election was held in barns on the Mackay estate, and Mr. Willets was elected Mayor. John Mackay, Ellen A. Hennessy, Stephen Willets and Catherine Hechler were elected Trustees. Charles Hechler, Mrs. Heckler's husband, was designated Village Clerk.

The village then and now

When East Hills was incorporated in 1931, the land area of East Hills was 98% farm and estate holdings, with 65 homes occupying the remaining 2%. Today, the percentage is reversed; with 98% of the land area occupied by homes, and less than 2% remains undeveloped. There are about 2,300 homes today in East Hills, and the population is approaching 7,200 people.

That, in brief, is the story of East Hills—beginning with holdings by Indian tribes, to vast acreages for the wealthy few, to gracious living for many today. 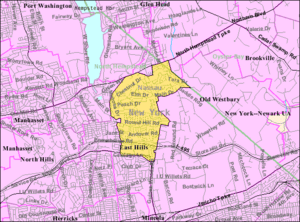 According to the United States Census Bureau, the village has a total area of 2.3 square miles (6.0 km2), all of it land.

The portions of the village on Harbor Hill, in Clarence Mackay's former estate, are among the highest areas in Nassau County.

On Labor Day 2006, The Park at East Hills opened. It has a pool, nature walks, senior facilities, and tennis and basketball courts. The construction of the park was financed through the sale of bonds; carrying and operating costs are paid through taxes.

There were 2,245 households, out of which 46.2% had children under the age of 18 living with them, 84.4% were married couples living together, 4.9% had a female householder with no husband present, and 9.6% were non-families. 8.5% of all households were made up of individuals, and 5.4% had someone living alone who was 65 years of age or older. The average household size was 3.04 and the average family size was 3.2. 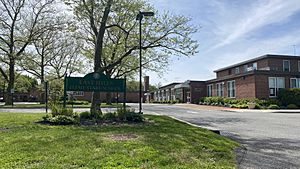 The Roslyn Union Free School District's East Hills Elementary School, which is located within the village.

Two state-owned roads pass through and serve the village:

While there are no Long Island Rail Road stations located within the village limits, the Oyster Bay Branch does form portions of the Roslyn-East Hills border.

The nearest station to the village is the Roslyn station on the Oyster Bay Branch. 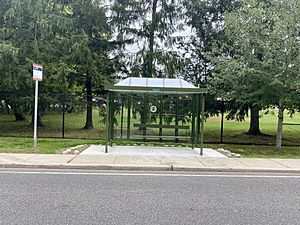 A bus stop for the n27 on Harbor Hill Road in October 2021. The bus shelter pictured was donated by residents Adam and Reneé Haber.

East Hills is served by the n20H and n27 bus routes, which are operated by Nassau Inter-County Express (NICE). The n20H travels along the village's northern border via Northern Boulevard. The n27 travels through the heart of the village along Harbor Hill Road, as well as along Glen Cove Road.

National Grid provides natural gas to homes and businesses that are hooked up to natural gas lines in the Village of East Hills.

PSEG Long Island provides power to all homes and businesses within the Village of East Hills.

Most places in East Hills are not connected to a sanitary sewer system – although there were failed plans in the 1970s to create a sewer district for much of northwestern Nassau County, which would have included East Hills in the second phase of the $122 million (1972 USD) project. As such, the majority of homes and businesses in East Hills rely on cesspools and septic systems.

Trash collection services in East Hills are provided and operated by the village.

The Village of East Hills is served by four water districts:

Additionally, some portions of the Northern State Parkway within the village are within the northern extremes of the Albertson Water District.

All content from Kiddle encyclopedia articles (including the article images and facts) can be freely used under Attribution-ShareAlike license, unless stated otherwise. Cite this article:
East Hills, New York Facts for Kids. Kiddle Encyclopedia.