Forrestal was a supporter of naval battle groups centered on aircraft carriers. In 1954, the Navy's first supercarrier was named the USS Forrestal in his honor, as is the headquarters of the United States Department of Energy. He is also the namesake of the Forrestal Lecture Series at the United States Naval Academy, which brings prominent military and civilian leaders to speak to the Brigade of Midshipmen, and of the James Forrestal Campus of Princeton University, in Plainsboro, New Jersey.

Forrestal was born in Matteawan, New York. He was an amateur boxer. After graduating from high school at the age of 16 in 1908, he spent the next three years working for a trio of newspapers.

Forrestal entered Dartmouth College in 1911, but transferred to Princeton University sophomore year. The senior class voted him "Most Likely to Succeed", but he left just prior to completing work on a degree.

When World War I broke out, he enlisted in the Navy and ultimately became a Naval Aviator, training with the Royal Flying Corps in Canada. During the final year of the war, Forrestal spent much of his time in Washington, D.C., at the office of Naval Operations, while completing his flight training. He eventually reached the rank of Lieutenant Junior Grade.

Following the war, Forrestal served as a publicist for the Democratic Party committee in Dutchess County, New York helping politicians from the area win elections at both the state and national level. One of those individuals aided by his work was Franklin D. Roosevelt.

President Franklin D. Roosevelt appointed Forrestal a special administrative assistant on June 22, 1940. Six weeks later he nominated him for the newly established position, Undersecretary of the Navy. In his nearly four years as undersecretary, Forrestal proved highly effective at mobilizing domestic industrial production for the war effort. He became Secretary of the Navy on May 19, 1944. 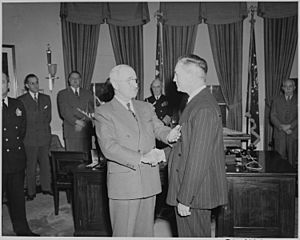 Forrestal traveled to combat zones to see naval forces in action. He was in the South Pacific in 1942, present at the Battle of Kwajalein in 1944, and (as Secretary) witnessed the Battle of Iwo Jima in 1945. In 1947 President Harry S. Truman appointed him the first United States Secretary of Defense. Forrestal continued to advocate for complete racial integration of the services, a policy eventually implemented in 1949.

Forrestal's greatest legacy may have been an unrealized one. Forrestal, along with Secretary of War Henry Stimson and Under Secretary of State Joseph Grew, in the early months of 1945, strongly backed a softer policy toward Japan that would permit a 'face-saving' surrender. Had his advice been followed, Japan might well have surrendered before August 1945, before the use of the atomic bomb on Hiroshima and Nagasaki. So strongly did he feel about this matter that he began negotiation efforts that some regarded as approaching insubordination.

All content from Kiddle encyclopedia articles (including the article images and facts) can be freely used under Attribution-ShareAlike license, unless stated otherwise. Cite this article:
James Forrestal Facts for Kids. Kiddle Encyclopedia.