Beacon is a city located in Dutchess County, New York, United States. The 2010 census placed the city total population at 15,541. Beacon is part of the Poughkeepsie–Newburgh–Middletown, New York Metropolitan Statistical Area as well as the larger New York–Newark–Bridgeport, New York–New Jersey–Connecticut–Pennsylvania Combined Statistical Area. It was named to commemorate the historic beacon fires that blazed forth from the summit of the Fishkill Mountains to alert the Continental Army about British troop movements.

The area occupied as Beacon was originally settled as the villages of Matteawan and Fishkill Landing in 1709, which were among the first colonial communities in the county. Beacon is located in the southwest corner of Dutchess County in the Mid-Hudson Region, approximately 90 miles (140 km) south of Albany, New York, and approximately 60 miles (97 km) north of New York City.

In 1683, the land that would come to include the City of Beacon was purchased from the Wappinger Indians by Francis Rombout and Gulian Verplanck, merchant-fur traders from New York City. The sale was confirmed, in 1685 by royal patent issued in the names of Rombout, Jacobus Kipp (as successor to the deceased Verplanck, and Stephanus Van Cortlandt. Rombout died in 1691, leaving his share to his daughter, Catharyna, who later married Roger Brett, an officer in the Royal Navy. The Rombout Patent was partitioned in 1706 with Catharyna Brett receiving about 28,000 acres along the Vis Kill. In 1708 the Bretts re-located upriver from the family home on Broadway to an area near the mouth of the Fishkill Creek and built a grist mill on the lower creek. In June 1718, Roger Brett was drowned when his sloop encountered a fierce squall near Fishkill Landing while returning from New York with supplies. Thereafter Catharyna Brett continued to manage her holdings, becoming a well-respected businesswoman.

Unlike the Verplancks, Livingstons, and other landowners, Madam Brett was not averse to selling land to settlers, although often retaining the right to build a mill. Of paramount importance was the commerce in flour. During the first third of the nineteenth century, Dutchess County ranked first among New York State counties in wheat production, supplying one third of all the flour produced in the State. Madam Brett laid out a free road over her property from the river eastward to the limits of her lands. “Madam Brett’s Road” (now, route 52) ran from Fishkill Landing through Matteawan to Fishkill. The mill thrived, attracting farmers from both sides of the river. Wheat and corn were ground into flour and meal, and shipped to New York. In 1748, Madam Brett, with eighteen others, entered into an agreement for the building of the Frankfort Store House. which stood near the water at the "Lower Landing" north of Dennings Point. This was the origin of river freighting. Fishkill Landing developed into a river port. As early as 1780 two dozen vessels operated out of Fishkill Landing. 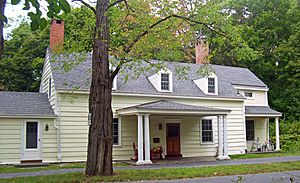 The early development of Fishkill Landing was due in no small part to the enterprises of John Peter DeWint. [1] DeWint was born in Tappan in 1787. His father was a Dutchman who came to New York from the West Indies. The DeWint house in Tappan was one of George Washington's headquarters during the Revolution. In September 11, 1814 John Peter DeWint married Caroline Smith, granddaughter of John Adams. DeWint owned 2,000 acres at Fishkill Landing, a gift from his father; and held property and business interests across the river in Newburgh. In 1815 he built the Long Dock. He had a shipyard on the river just south of the Long Dock, and interests in the freight business which for many years was conducted by sloops for the Long Dock as well as the Lower and Upper Landings. In 1828 Cornelius Carman of Low Point, (present day Chelsea), built for DeWint and Carpenter, the Plow Boy, the first steam-powered ferry between Fishkill Landing and Newburgh. The Fishkill Landing post office was established in 1804. DeWint purchased the Bogardus-DeWindt House and lands as part of his Cedar Grove estate. His mother, Elizabeth, moved there in 1825. DeWint's original homestead was located on the river just north of Fishkill Landing, but was destroyed by fire in 1862. He donated land for the Dutch parsonage and burial grounds. John Peter DeWint died on November 18, 1870.

Between the voyages of the Half Moon and the Clermont there were two centuries when sloops conducted much of the river traffic. The sloop is of Dutch origin. In its simplest form, it is a vessel of one mast, carrying a mainsail, jib, and generally a topsail. For steering, a long tiller was used. Sloops were a favorite means of travel, and for the shipping of light articles, parcels, and letters. Frequently, better time was made the sloop than by the stagecoach. The Caroline, built by John Peter DeWint and named in honor of his daughter, once made the sixty miles from New York to Fishkill Landing in five hours. 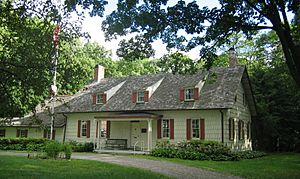 Matteawan was situated on the Fishkill Creek about a mile and a half east of Fishkill Landing, and a like distance above the mouth of the creek, whose hydraulic properties contributed to its development as a manufacturing center. It lay at the foot of the Fishkill Mountains, and was a station on both the Newburgh, Dutchess & Connecticut, and the New York & New England Railroads, and was connected with the Fishkill Landing by stage, and rail. The first settlers were Roger and Catharyna Brett, who in 1709 built a home further upstream from their original location.

Ferry service between the future locations of both Beacon and Newburgh had existed in some form at least since 1743. By the early 20th century the fleet had grown to three 160-foot (49 m) coal-fired ferries, the Orange, Dutchess and Beacon, capable of carrying 30 vehicles each. It linked the two segments of NY 52, the major east-west artery at that point. Increasing traffic on 52 by midcentury, however, coupled with the building of the New York State Thruway in the Hudson corridor, was straining the ferry beyond its breaking point. The state's Department of Public Works began planning for a bridge, but it was not a serious possibility until federal money became available through the construction of Interstate 84. Beacon is serviced weekdays by a commuter ferry, The Newburgh-Beacon Ferry, over the Hudson between both cities which helps alleviate traffic to the Beacon Train Station from Orange County commuters. The ferry's route runs between Beacon City Harbor and Newburgh City Waterfront.

The city served a variety of roles during the Revolutionary War. It manufactured war supplies, and served as a fort and signaling point. The city's name came from signal fires that were atop nearby Mount Beacon. During the 1800s, the city became a factory town and was known as "The Hat Making Capital of the US" with nearly 50 hat factories operating at one time.

Beacon incorporated as a city in 1913, amalgamating the two villages as well as a small portion of the hamlet of Glenham from the town of Fishkill. 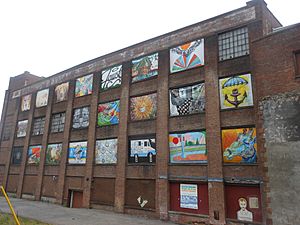 During the 1960s, urban renewal led to the destruction of some significant historic buildings. In the late 1970s, the Dutchess Ski area, which had been a large tourist attraction, was closed. Also in the 1970s, a decline in the economy shuttered most of the factories. This decline quickly became a severe and ongoing economic downturn that lasted from about 1970 to the late 1990s, during which almost 80 percent of the city's commercial business spaces and factories were vacant. Starting in the late 1990s, with the opening of one of the world's largest contemporary art museums Dia: Beacon, Beacon began an artistic and commercial rebirth. New development continues to enlarge the city. Currently, the two largest planned projects are a waterfront hotel and conference center, and "The Rivers and Estuaries Center" on Dennings Point.

Beginning on February 24, 2010, a massive snowstorm affected the city and surroundings. On February 25, Mayor Steve Gold enacted a State Of Emergency, due to total snow accumulations in excess of three feet. The city was without electricity and gas services for over two days.

Beacon is home to one of a handful operating "dummy lights" in the United States, located at the intersection of Main and East Main Streets. It is a traffic signal on a pedestal which sits in the middle of an intersection, dating back to the 1920s. Two others are located in New York, in Canajoharie and Croton-on-Hudson.

Located on the eastern shore of the Hudson River, Beacon is noted for its proximity to numerous historic sites and large cities. It is located minutes away from Bannerman's Castle and West Point. Beacon also sits with the famous Mount Beacon as its backdrop and the Hudson River as its front door. The city also is located across the river from its larger sister city, Newburgh. Beacon is just 20 minutes south of the Hudson Valley Region Capital City, Poughkeepsie. In addition, Danbury, Connecticut is located to the east and New York City is to the south.

The city includes the following neighborhoods:

Byrnsville, or Tioronda, was a hamlet near the mouth of the Fishkill, about a mile south of Fishkill Landing, and contained the Tioronda Hat Works. In 1880 it had a population of two hundred and seventeen. The Hat Works occupied the site of an old cotton-mill at this place which failed before 1850. A grist and saw-mill were subsequently built on the site but torn down by Lewis Tompkins in 1878 when the Hat Works were erected. A little below these works is the former site of the Madam Brett grist-mill, for which this has been mistaken.

Groveville derives its name from the extensive oak grove which formerly occupied the site. There was a grist mill at Groveville from a very early day, owned about 1820 by Samuel Upton, a Quaker. who acquired it from Abraham Dubois. Upton also erected on the opposite side of the race a stone building which he used as a fulling mill. Sometime after 1840, the property, was sold it to the Glenham Co., who converted it to a woolen mill, and did carding,spinning and weaving. 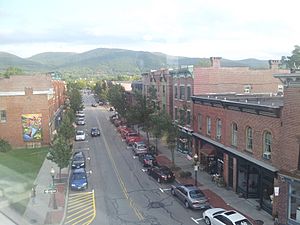 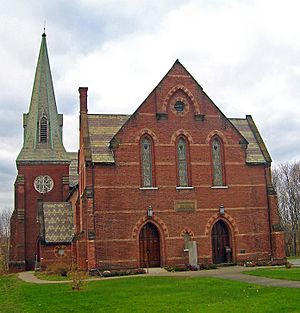 Based on census data showing 5,091 households, 34.7% have children under the age of 18 living with them, 44.6% are married couples living together, 16.9% have a female householder with no husband present, and 34.0% are non-families. 28.6% of all households are made up of individuals and 10.4% have someone living alone who is 65 years of age or older. The average household size is 2.61 and the average family size is 3.23. 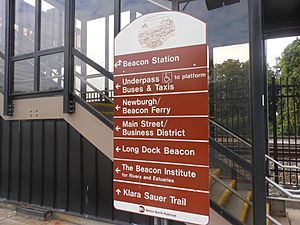 Beacon's most major route is Interstate 84 (I-84), which passes through the city's north side, providing a connection that is minutes to the Taconic State Parkway, New York State Thruway, and Stewart International Airport. The city also has the Newburgh-Beacon Bridge which carries the Interstate Highway over the Hudson River.

From 1902 to 1978, the Mount Beacon Incline Railway was one of the steepest incline railways in existence (a 74% grade). It took an estimated 3.5 million people up to the 1,540-foot (470 m) summit of Mount Beacon. Fire and vandalism destroyed the incline railway. There is now a movement to restore it.

In the nearby Town of Wappinger, the Dutchess County Airport services local commuter flights. The nearest major airport to Beacon is Stewart International Airport about 10 minutes away, in Newburgh.

Beacon also has its own shuttle service, which runs on Sundays (unlike the LOOP buses).

All content from Kiddle encyclopedia articles (including the article images and facts) can be freely used under Attribution-ShareAlike license, unless stated otherwise. Cite this article:
Beacon, New York Facts for Kids. Kiddle Encyclopedia.