Kids Encyclopedia Facts
This page is about the village on the Hudson River. For the town in western New York, see Coldspring, New York. For the hamlet on Long Island, see Cold Spring Harbor, New York.

Cold Spring is a village in the town of Philipstown in Putnam County, New York, United States. The population was 1,983 at the 2010 census. It borders the smaller village of Nelsonville and Garrison. The central area of the village is on the National Register of Historic Places as the Cold Spring Historic District due to its many well-preserved 19th-century buildings, constructed to accommodate workers at the nearby West Point Foundry (itself a Registered Historic Place today). The town is the birthplace of General Gouverneur K. Warren, who was an important figure in the Union Army during the Civil War. The village, located in the Hudson Highlands, sits at the deepest point of the Hudson River, directly across from West Point. Cold Spring serves as a weekend getaway for many residents of New York City.

Commuter service to New York City is available via the Cold Spring train station, served by Metro-North Railroad. The train journey is about an hour and ten minutes to Grand Central Terminal.

The site of present-day Cold Spring was part of the lands belonging to Adolphus Philipse. The first settler of Cold Spring was Thomas Davenport in 1730. In 1772 a highway master was chosen for the road from Cold Spring to the Post Road from New York to Albany. A small trading hamlet grew alongside the river by the early 1800s. A couple of sloops made regular weekly trips from Cold Spring to New York, carrying wood and some country produce, which came over this model road from the east. Those trips by sloop usually took a week.

In 1818 Gouverneur Kemble established the West Point Foundry opposite West Point to produce artillery pieces for the United States Government. The nearbys mountains contained veins of ore, and were covered with timber for fuel. A brook provided hydropower, and the Hudson a ready shipping outlet. In 1843, the Foundry built the USS Spencer, the first iron ship built in the U.S. With the influx of workers at the Foundry, local housing, businesses and churches increased, and Cold Spring was incorporated as a village in 1846. The first President of the Village was Joshua Haight. The Foundry became famous for its production of Parrott rifles and other munitions during the Civil War, when the foundry grew to a sprawling 100-acre complex employing 1,400. It also manufactured cast iron steam engines for locomotives, gears, and produced much of the pipework for New York’s water system. The rise of steel making and the declining demand for cast iron after the Civil War caused the Foundry to cease operations in 1911.

Many artifacts from the Foundry's history can be viewed at the Putnam History Museum on Chestnut Street. Built in 1830, the building was originally a one-room schoolhouse for the Foundry's teenage apprentices and the children of employees.

On January 22, 1896, local businessmen of Cold Spring formed a fire brigade known as the Cold Spring Hose Company, No.1. A horse-drawn hook and ladder was donated in 1899. The Municipal Building, designed by Louis Mekeel, was constructed in 1926 to house the company's first firetruck, an American LaFrance. The company, renamed Cold Spring Fire Company No.1 in 1900, serves the Villages of Cold Spring, Nelsonville and a district in the Town of Philipstown.

Mr. Willis Buckner, a former slave from the South, was a driver and groom for Susan and Anna Bartlett Warner at their farm on Constitution Island. Mr. Buckner taught Sunday School at the Methodist Church. In the early decades of the 20th century blacks who stayed in this part of New York state migrated away from rural towns to nearby cities with waterfront manufacturing such as Peekskill, Beacon, Newburg, Ossining. During the 1920s the Ku Klux Klan had a presence in Cold Spring as well as Fishkill and Nelsonville.

The Julia L. Butterfield Memorial Hospital was built in 1925. The hospital closed in 1995.

A battery factory operated from 1952 to 1979, polluting nearby Constitution Marsh, before the marsh was cleaned (at great expense) in the 1990s.

Pete Seeger formed the Clearwater organization, an environmental group dedicated to advances in sewer treatment, industrial waste disposal, and addressing the discharge of major pollutants into the Hudson. In 1970, the sloop Clearwater docked for a songfest at Cold Spring. As Seeger appeared on stage to thank the audience for coming, fifteen drunks stood up waving little American flags, yelling “Throw the Commies out.” That night someone cut the sloop’s moorings and there were threats to torch the boat. All of this created tension within the Clearwater organization.

Towards the latter part of the nineteenth century artists, writers and prominent families were drawn to Cold Spring by the beauty of the Hudson Highlands. Mansions were built along Morris Avenue, including "Undercliff", the home of publisher George Pope Morris, and "Craigside", the home of Julia and General Daniel Butterfield., 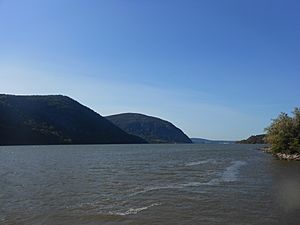 The village is bordered by the Hudson River to the west, and is bound by the Hudson Highlands State Park to the north, where Mount Taurus and Breakneck Ridge rise steeply and dramatically out of the banks of the Hudson and form two basically parallel ridges that track each other inland. The valley between them has an abandoned dairy farm, two lakes, and a camp. The view from the river bank is the Constitution Marsh and the US Military Academy (West Point) slightly to the south, and Crow's Nest and Storm King Mountain to the west and northwest. All of this considered, the village is nestled in the most prominent vertical terrain on the Hudson River north of New York City prior to the Shawangunk and Catskill ranges. Being bound by these formidable terrain features has kept the size of the village small, and prevented the suburban sprawl that has come about in the less-constrained regions to the north and south and in the New York Metropolitan area generally. This unique sense of place, and the village's historic housing stock, have made it a very popular weekend destination for tourists from New York City. Its oldest current home is located on 191 Main Street and was built in 1814. Some say Abraham Lincoln visited that house when he visited Cold Spring.

Out of the 910 households, 24.5% had children under the age of 18 living with them, 45.8% were married couples living together, 8.5% had a female householder with no husband present, and 41.9% were non-families. 69% of all households were made up of individuals and 18.1% had someone living alone who was 65 years of age or older. The average household size was 2.18 and the average family size was 2.88.

Stonecrop Gardens is a traditional Alpine garden, open to the public since 1992, that was created by Garden Conservancy founder Frank Cabot and his wife, Anne in 1958.

The Cold Spring Film Society is a local arts non-profit that shows free movie screenings within the village throughout the year.

All content from Kiddle encyclopedia articles (including the article images and facts) can be freely used under Attribution-ShareAlike license, unless stated otherwise. Cite this article:
Cold Spring, New York Facts for Kids. Kiddle Encyclopedia.