Kids Encyclopedia Facts
This page is about the mountain. For the train station, see Breakneck Ridge (Metro-North station).

Breakneck Ridge is a mountain along the Hudson River between Beacon and Cold Spring, New York, straddling the boundary between Dutchess and Putnam counties. Its distinctive rocky cliffs are visible for a long distance when approached from the south, and together with Storm King Mountain on the opposite bank of the river forms Wey-Gat, or Wind Gate, the picturesque northern gateway to the Hudson Highlands.

Former quarries on south side of ridge.

It has several summits, the highest, some distance inland, reaching approximately 1,260 feet (384 m) above sea level. The southern face of the peak is remarkable for its striking cliffs, the result of quarrying in past years. Lying within Hudson Highlands State Park, it offers many stunning views of the river and region and is quite popular with hikers, to the point that a rail flag stop has been established on the Metro North line which runs right by the base of the ridge along NY 9D.

Until the early 20th century, the mountain was also known as St. Anthony's Face or Turk's Face, after a facelike stone formation on the southern cliffs that was destroyed by quarrymen in 1846. (This reference a different mountain, “Anthony’s Nose” not Breakneck. 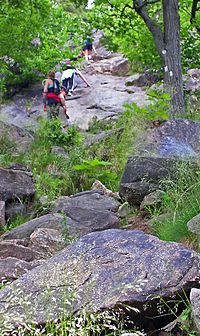 Hikers working their way up the mountain.

While several routes exist, most hikers take the white-blazed route up the mountain's west face that begins on the West (Southbound) side of Route 9D near the tunnel. After circling around to cross above the tunnels, it begins a steep, rocky and challenging climb up to the first bump of the mountain, about 720 feet (219 m) above the river, where there are sweeping views of the river and Highlands. It continues in a similar fashion over the remaining bumps until it reaches the summit, but keeps on going and becomes a trail that travels over several other summits, and eventually peters out. However, there are other small trails that lead down from the white trail, as there are blue, red, and green trails that ascend from the various other summits that the white blazed trail crosses over. They serve as a shortcut to the base of the mountain.

All content from Kiddle encyclopedia articles (including the article images and facts) can be freely used under Attribution-ShareAlike license, unless stated otherwise. Cite this article:
Breakneck Ridge Facts for Kids. Kiddle Encyclopedia.