Fishkill is a village within the town of Fishkill in Dutchess County, New York, United States. The village population was 2,171 at the 2010 census. It is part of the Poughkeepsie–Newburgh–Middletown, NY Metropolitan Statistical Area as well as the larger New York–Newark–Bridgeport, NY-NJ-CT-PA Combined Statistical Area.

The village is in the eastern part of the town of Fishkill on U.S. Route 9. It is north of Interstate 84. NY 52 is the main street.

Fishkill is located in the former territory of the Wappinger people. It was part of the Rombout Patent granted to Francis Rombouts, Gulian VerPlanck, and Stephanus Van Cortlandt of New Amsterdam in 1685. The name "Fishkill" evolved from two Dutch words, vis (fish) and kil (stream or creek). In 1714, Dutch immigrants settled in the area. The village of Fishkill was a significant crossroads in the overland transportation network in the 18th and 19th centuries. The Kings Highway, connecting Albany to New York City, intersected with a major overland route from New England to the Hudson River. Among the first to occupy the land now within the village limits were Johannes Ter Boss and Henry Rosecrance.

By 1716 the settlers wanted their own Dutch Reformed church so they would not have to cross the river to Kingston or New Paltz to worship. A congregation was established and the church building was finished in 1731. The first Dominie (minister) who arrived from the Netherlands in 1731 served churches in Poughkeepsie and Fishkill. The church was used as a military prison during the American Revolution. The fourth New York Provincial Congress met in the church in 1776, making Fishkill the state capital, until the Congress moved to Kingston in 1777.

In 1871, construction began for a schoolhouse on Church Street. The site used for the schoolhouse belonged to the Fishkill Reformed Church and was formerly used as pasture land for the pastor's cow.

According to the United States Census Bureau, the village has a total area of 0.89 square miles (2.3 km2), all of it land.

There were 965 households out of which 14.1% had children under the age of 18 living with them, 32.2% were married couples living together, 6.9% have a woman whose husband does not live with her, and 58.5% were non-families. 53.9% of all households were made up of individuals and 32.8% had someone living alone who was 65 years of age or older. The average household size was 1.80 and the average family size was 2.74. 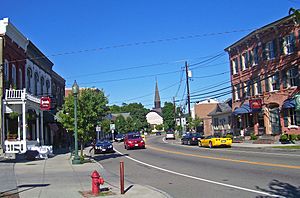 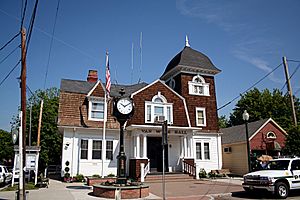 Fishkill is served by the bus routes "A", "B", and "F", operated by Dutchess LOOP.

Fishkill is the site of Camp Mariah, a camp that enables inner-city youth to embrace the arts, and introduces them to career opportunities. The camp is named after co-founder musician Mariah Carey.

In 1996, the animal rights group PETA suggested the town (and, presumably, the village as well) change its name to something less suggestive of violence toward fish. The town declined this change because the name is not meant to suggest violence but instead comes from the Dutch who originally settled the land in which "kill" means "creek". Various other communities also contain the word "Kill" with various prefixes, and a creek in the Catskills called Beaver Kill is a tributary of the Delaware River. Both "Catskill" and "Beaver Kill" could be considered to promote animal violence when their names are improperly understood. This led then-mayor George Carter to joke that if Fishkill is renamed, the Catskills should also be renamed, presumably to the Catsave Mountains.

The largest employer in the area is Gap Clothing. In 2000 the facility opened; in 2001 it expanded. In 2014 the company announced plans to add 1,200 jobs over a 5-year period and invest $96 million into the distribution center.However, on 29 August 2016, a massive fire at the Gap distribution center left hundreds of people out of work. 600 employees were safely evacuated from the facility on Merritt Boulevard just before 11 p.m., when the fire appeared to have started on the second floor and quickly spread.

All content from Kiddle encyclopedia articles (including the article images and facts) can be freely used under Attribution-ShareAlike license, unless stated otherwise. Cite this article:
Fishkill, New York Facts for Kids. Kiddle Encyclopedia.