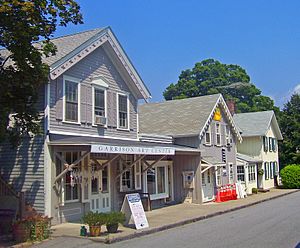 The Garrison Art Center and other structures within Garrison Landing 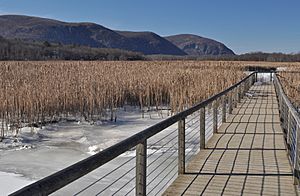 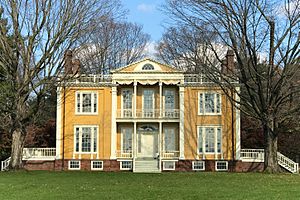 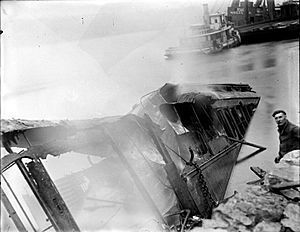 Garrison is a hamlet in Putnam County, New York, United States. It is part of the town of Philipstown, on the east side of the Hudson River, across from the United States Military Academy at West Point. The Garrison Metro-North Railroad station serves the town. Garrison (a.k.a. Garrison's Landing) was named after 2nd Lieutenant Isaac Garrison who held a property lot on the Hudson River across from West Point and conducted a ferry service across the Hudson River between the two hamlets. Isaac and his son Beverly Garrison fought in the Battle of Fort Montgomery in 1777, were captured by the British and later set free.

For the 1969 film Hello, Dolly! starring Barbra Streisand, Garrison was the filming location for the Yonkers scenes. The Saint Basil Academy in the town served as the finish line of The Amazing Race 10 in 2006.

Garrison is home to many non-profit and cultural organizations. Manitoga is the extensive woodland gardens estate of modernist designer Russel Wright, and the location of his National Register of Historic Places listed modern style house Dragon Rock. It is operated by the non-profit Russel Wright Design Center, with tours and hiking trails. The Hudson Valley Shakespeare Festival, founded in 1987 with its first performances at Manitoga, is now located at Boscobel, a Federal-style mansion (built 1804–1808) for the Morris States Dyckman family. Constitution Marsh is an Audubon sanctuary with walking trails and canoe tours on the Hudson River. The Hudson Highlands Land Trust promotes and assists in local conservation efforts.

The Garrison Institute is a progressive interfaith organization and retreat center. The Hastings Center, founded in 1969, is an internationally recognized bioethics think tank and research center. The Garrison Art Center promotes local and regional artists. The national corporate headquarters of Outward Bound USA, the worldwide premier outdoor adventure and educational organization is also located in Garrison.

All content from Kiddle encyclopedia articles (including the article images and facts) can be freely used under Attribution-ShareAlike license, unless stated otherwise. Cite this article:
Garrison, New York Facts for Kids. Kiddle Encyclopedia.