Beacon Mountain, locally Mount Beacon, is the highest peak of Hudson Highlands, located south of City of Beacon, New York, in the Town of Fishkill. Its two summits rise above the Hudson River behind the city and can easily be seen from Newburgh across the river and many other places in the region. The more accessible northern peak, at 1,531 feet (467 m) above sea level, has a complex of radio antennas on its summit; the 1,610-foot (491 m) southern summit has a fire lookout tower.

Beacon Reservoir, the city's main water source, is located between North Beacon and neighboring Scofield Ridge, the highest peak in Putnam County. Since much of the land on the mountains and up to the county line is owned by the city to protect the watershed, an extensive system of roads and trails makes it a popular hiking area. Both summits afford extensive views of the mid-Hudson region, and on clear days New York City is visible from the fire tower.

In the past, North Beacon was home to Dutchess [1]ski area, and the remains of three ski trails can still be seen from the north. Additionally there was once the Mount Beacon Incline Railway, which stopped running in 1978 but has since been added to the National Register of Historic Places. Its track can still be seen going up the mountain and can be used to climb it, albeit steeply. At various other times in the past this summit housed a restaurant, a casino and a hotel. 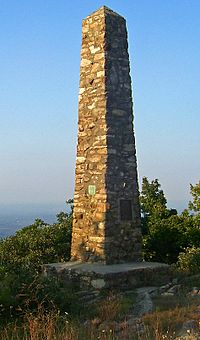 The easiest way up the mountain is a dirt road used by city employees doing maintenance work or inspections of the reservoir. It is, however, closed to public vehicular use and vehicles are regularly ticketed for doing so.

The white-blazed Fishkill Ridge Trail leaves from the end of Pocket Road on the west side of Beacon. It can be followed for a mile up misnamed Dry Brook to the reservoir road. At the reservoir good roads continue up to the north summit, and at one corner the yellow-blazed Wilkinson Memorial Trail offers access to the south summit.

The Wilkinson Trail can also be followed from its southern terminus at NY 9D south of the city, or its northern end near US 9 in Putnam County. Both routes require more time and distance, however.

One may also park and climb up the mountain from "Mount Beacon Park" in the City of Beacon. Parking area and trailhead are located at the intersection of Route 9D and Howland Avenue in the City of Beacon, across from Bob's Corner Store. The Park is part of the Scenic Hudson organization. Walk a quarter mile up the trail to see the remains of the old lower Railhead. Then a set of about 200 sturdy steps takes you a ways up the mountain to the first steep gravel and dirt trails. Even at this "lower" point you will have a great view of the river in the distance, especially when the leaves have fallen. 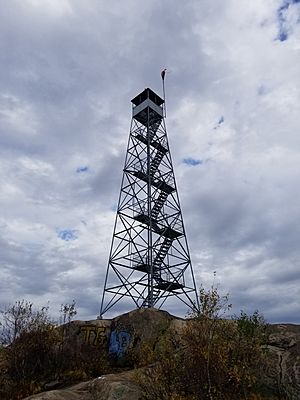 Fire lookout tower at the summit of South Beacon Mountain

All content from Kiddle encyclopedia articles (including the article images and facts) can be freely used under Attribution-ShareAlike license, unless stated otherwise. Cite this article:
Beacon Mountain Facts for Kids. Kiddle Encyclopedia.