Jericho /dʒɛrɪkoʊ/ is a hamlet and census-designated place (CDP) in Nassau County, New York on the North Shore of Long Island. As of the United States 2010 Census, the CDP population was 13,567. The area is served by the Jericho Union Free School District and the Syosset Central School District, the boundaries of which differ somewhat from those of the hamlet. The boundaries of the Jericho Post Office vary from both the hamlet and the school district boundaries, notably the inclusion of a portion of Jericho in the Westbury zip code, and the inclusion of a portion of Syosset in the Jericho zip code. Also, Jericho is located approximately 29 miles (47 km) east of Midtown Manhattan. Direct service is available by driving west on the Long Island Expressway or one can take the Long Island Rail Road from nearby Hicksville or Syosset train station.

Located mainly in the Town of Oyster Bay with a small part in the Town of Hempstead, Jericho was part of the Robert Williams Plantation in 1648. The English families who settled in Jericho were, or soon became, Quakers, members of the Society of Friends. Many fled from persecution in England and in the New England Colonies. They sought a peaceful existence as farmers. The name of the area was changed in 1692 from Lusum to Jericho after the town in the Middle East near the Jordan River mentioned in the Bible as part of the Promised Land.

Elias Hicks married Jemima Seaman in 1771 and moved to her family’s farm in Jericho, where he soon became a noted preacher of Quaker doctrine. All the Quakers suffered during the British occupation of Long Island in the Revolutionary War. The practice was to quarter troops in homes of residents, who had to provide room and board for them. The Quakers continued to protest the entire concept of war itself. After the war, peace returned to Jericho, and the neat farms and businesses began to prosper. A Friends Meeting house was built in 1788 in Jericho that is still used in the 21st century. A Quaker school was built in 1793, the Charity Society of Jericho and Westbury in 1794, and slavery was abolished in 1817, with Hicks' help. 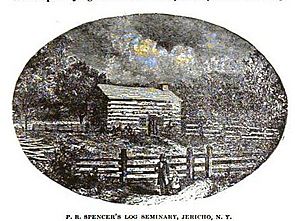 A Post Office was established in 1802, a cider mill in the mid-19th century, the first public elementary school in 1905, known as the Cedar Swamp School. Improvements to infrastructure were made with the founding of the Jericho Water District in 1923. As the population increased, a new elementary school was built in 1953 (Robert Seaman School), and a Volunteer Fire Department established in 1938. The population kept increasing until the last elementary schools in Jericho were built, the George A. Jackson Elementary School in 1957, the now closed Robert Williams School in 1961 and the Cantiague School in 1963. When the Village of Muttontown was incorporated, the cider mill was within the village limits. Because most Gold Coast villages wanted to remain business free areas, many do not have their own post offices or ZIP Codes. Therefore, Jericho Post Office which serves this area of Muttontown is displayed as the official USPS mailing address and leads to the misconception that the cider mill is in Jericho.

After World War II, in the 1950s Phebe Underhill Seaman sold a large piece of her land to real estate developers. This property was developed for new suburban housing. The water tower was erected in 1952. In 1958 the NY Department of Transportation demolished "Old Jericho" to widen Broadway, Routes 106/107, and to put in a cloverleaf access to Jericho Turnpike. New grade schools and a high school were added to the community along with a shopping center, a new Post Office, new Fire Department and a Public Library.

Also in Jericho is the New York Community Bank Theatre, originally established in 1956 as the Westbury Music Fair. The main entrance to SUNY Old Westbury is located in Jericho.

According to the United States Census Bureau, the CDP has a total area of 4.1 square miles (11 km2), all land.

There is also another Jericho in New York, this one is located in the extreme Northeast corner of the state, in the Town of Altona, county of Clinton. It lies primarily along the Rand Hill Road.

There were 4,545 households out of which 38.6% had children under the age of 18 living with them, 74.8% were married couples living together, 7.1% had a female householder with no husband present, and 16.1% were non-families. 13.7% of all households were made up of individuals and 6.1% had someone living alone who was 65 years of age or older. The average household size was 2.81 and the average family size was 3.08.

The building now known as the Maine Maid Inn was built in 1789 as the home for the prominent Quaker and abolitionist Valentine Hicks, his wife Abigail, and their children. Hicks' father Elias Hicks "had been the spark that helped convince Quakers and other like-minded people after the Revolutionary War that all men were created equal—including people of color who were enslaved". Valentine Hicks was also an Underground Railroad station master; in his home - a key way station - a removable panel behind an upstairs linen closet (that is still there today) concealed a staircase to the attic where Hicks hid runaways until the coast was clear. The Town of Oyster Bay designated the site as a historic town landmark in 2012. In 2015 there was a lot of outrage over the preservation of this historic site. Partial demolition of the Maine Maid Inn took place without the approval of the Oyster Bay landmark commission, which outraged many preservationists.

All content from Kiddle encyclopedia articles (including the article images and facts) can be freely used under Attribution-ShareAlike license, unless stated otherwise. Cite this article:
Jericho, New York Facts for Kids. Kiddle Encyclopedia.