Westbury is a village in Nassau County, on Long Island, in New York, United States. The population was 15,404 at the 2020 census.

The Incorporated Village of Westbury is in the Town of North Hempstead. It is located about 18 miles (29 km) east of Manhattan.

The first settlers arrived in 1658 in the region known as the Hempstead Plains. Many of the early settlers were Quakers.

Westbury's Jericho Turnpike, which provides connection to Mineola and Syosset as well as to the Long Island Expressway (or LIE), was once a trail used by the Massapequa Indians. As far back as the 17th century, it served as a divider between the early homesteads north of the Turnpike and the great plains to its south. Today, it serves as a state highway complex. 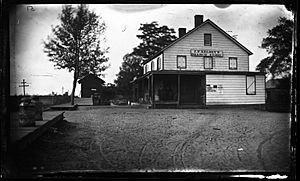 In 1657, Captain John Seaman purchased 12,000 acres (49 km2) from the Algonquian Tribe of the Massapequa Indians. In 1658, Richard Stites and his family built their homestead in this area. Theirs was the only family farm until an English Quaker, Edmond Titus, and his son Samuel, joined them and settled in an area of Hempstead Plains known to us today as the Village of Westbury. In 1675 Henry Willis, also an English Quaker, named the area "Westbury", after Westbury, Wiltshire, his hometown in England. Other Quaker families who were also seeking a place to freely express their religious beliefs joined the Tituses and Willises. The first Society of Friends meeting house was built in 1700. The early history of Westbury and that of the Friends are so interconnected that they are essentially the same.

These settlers, like many other landowners throughout the colonies, owned slaves. In 1775, compelled by their religious beliefs, the Quakers freed all 154 African-Americans that they owned. Many of these freed men and women built their own homesteads on the open land near the sheep grazing pastures. Their new community consisted of farms and dairies. In 1834, with Quaker assistance, they and their descendants built the New Light Baptist Church. Now known as the African Methodist Episcopal Zion Church, the building still stands on the corner of Union Avenue and Cross Street.

The outbreak of the American Revolution disrupted Westbury's tranquility. From the beginning of the war until 1783, British soldiers and German-speaking mercenaries occupied local homes, confiscated livestock, and cleared the woods for firewood for the troops. With the close of the war, Westbury received its third group of settlers, the Hessians, mostly from Hesse-Cassel in the Holy Roman Empire, who chose not to return to their home country. Instead, they remained in an area now known as New Cassel, a name chosen in honour of the part of Hesse from which most had come.

By 1837, the Long Island Rail Road had built through Westbury. Schedules from March 1837 mention a stop at Westbury, but by June list Carle Place instead, with schedules from 1842 listing both. In 1840, the first public school was built. The railroad made it easier for German, Italian, Irish and Polish immigrants to work Westbury's farms and in 1857, St. Brigid's Parish was founded.

At the same time more African-American families came to the area via the Underground Railroad. For some, Westbury was only one stop on the way to Canada, but several stayed in this area after being harbored in secret rooms in the homes of the Quakers. In the years after the Civil War, until near the turn of the century, the few stores that comprised the small village around the railroad depot, were mainly black owned.

The Village moved from its agricultural setting in the late 19th century when the very wealthy began to settle and build mansions. This area is now known as Old Westbury. Post Avenue soon became a commerce center to serve the surrounding estates. Various estate workers began to move in as well. Streets were mapped out and constructed. Post Avenue received electricity in 1902 and in 1914 a water company was founded.

From the 1850s to the 1900s, Westbury's population and ethnic diversity began to rise as many people of Irish, Italian and Polish origins continued to settle. New Cassel began to be developed in the first quarter of the 20th century.

In 1927, Charles Lindbergh took off from Roosevelt Field, a couple of hundred yards south of downtown, for the history-making flight to Paris, marking probably the most famous event tied to Westbury.

In response to a rumor that northern Westbury planned to incorporate, thereby leaving the southern part without a name, incorporation in 1932. The Village included Grantsville, the section south of Union Avenue around A.M.E. Zion church, but did not take in New Cassel, since the few families that lived there thought it would only unnecessarily increase their taxes.

In 1938, the Northern State Parkway was constructed and in 1940, Roosevelt Raceway. In 1941, the Second World War began. Westbury sent 1,400 persons to serve the country. This was 20% of the community's population, making it the highest percentage of any comparable community in the United States.

In the mid-1950s, Westbury virtually ran out of undeveloped land and with it came the end of the building boom. In 1940, Westbury listed its population at 4,525. By 1960, Westbury's population had grown to 14,757, according to the census data for that year. Many Caribbean and Latin American families began to settle during this time and in the decades that followed.

On the 8th September, 1974, Crosby, Stills & Nash performed at the Roosevelt Raceway.

As the birth rate declined, people married at a later age and the high cost of buying a home prevented many people from assuming a mortgage in the 1970s, Westbury again underwent change. Today, the Village's population remains over 15,000 and is rich with ethnic and racial diversity.

According to the United States Census Bureau, the village has a total area of 2.4 square miles (6.2 km2), all of it land.

In addition to Westbury Village itself, unincorporated regions surrounding its borders also use the Westbury name, including New Cassel, Salisbury (South Westbury) and parts of Jericho. For example, the world-famous Westbury Music Fair performing venue (now known as the NYCB Theatre at Westbury), located in the Westbury postal zone, is part of the Jericho hamlet.

The region is grouped under the name Greater Westbury, a region that also includes organizations with common interests, such as those in Carle Place, New York to the south and Old Westbury, New York to the north. The school districts that serve the Greater Westbury region, based on the boundaries, are Westbury (including New Cassel), Carle Place, East Meadow, East Williston and Jericho. The only homes zoned for East Meadow Schools are actually located in the Hamlet of Salisbury, which is in the Town of Hempstead.

There were 5,078 households, out of which 31.0% had children under the age of 18 living with them, 52.4% were married couples living together, 11.6% had a female householder with no husband present, and 30.6% were non-families. 24.4% of all households were made up of individuals, and 8.1% had someone living alone who was 65 years of age or older. The average household size was 3.0 and the average family size was 3.5.

Westbury is made up of white European Americans, African-Americans, Hispanic-Americans and Caribbeans; particularly Haitians, Guyanese, and Jamaicans. Many of the Hispanics are of Salvadoran, Honduran, and Mexican origin.

Westbury is served by the Main Line of the Long Island Rail Road with connection to Penn Station, Hicksville and Port Jefferson. It is also served by the following bus routes operated by Nassau Inter-County Express:

All content from Kiddle encyclopedia articles (including the article images and facts) can be freely used under Attribution-ShareAlike license, unless stated otherwise. Cite this article:
Westbury, New York Facts for Kids. Kiddle Encyclopedia.