Westbury is a town and civil parish in the west of the English county of Wiltshire, below the northwestern edge of Salisbury Plain, about 4 miles (6 km) south of Trowbridge and a similar distance north of Warminster. Originally a market town, Westbury was known for the annual Hill Fair where many sheep were sold in the 18th and 19th centuries; later growth came from the town's position at the intersection of two railway lines. The busy A350, which connects the M4 motorway with the south coast, passes through the town. The urban area has expanded to include the village of Westbury Leigh and the hamlets of Chalford and Frogmore.

The most likely origin of the West- in Westbury is simply that the town is near the western edge of the county of Wiltshire, the bounds of which have been much the same since the Anglo-Saxon period.

The -bury part of the name is a form of borough, which has cognates in many languages, such as the German -burg and the Greek -pyrgos. It carries the idea of a hill or fortified town. In Wiltshire, -bury often indicates an Iron Age or Bronze Age fortified hill fort, and such a site is to be found immediately above the Westbury White Horse.

Westbury is located in the far west of Wiltshire, close to the border with Somerset. It lies at the northwestern edge of Salisbury Plain, 18 miles (29 km) southeast of the city of Bath, approximately 5 miles (8.0 km) south of the county town of Trowbridge and 4.5 miles (7.2 km) north of the garrison town of Warminster. Other nearby towns and cities include Frome, Devizes, Salisbury and Bristol. Nearby villages include Bratton, Chapmanslade, Dilton Marsh, Hisomley, Edington, Upton Scudamore, North Bradley, Rudge, Standerwick, Hawkeridge, Heywood and Yarnbrook.

There are several suburbs including Frogmore, Bitham Park, the Meads and the Ham (all northside), Chalford, Leigh Park and Westbury Leigh (southside). Westbury Leigh is generally considered as a village separate to Westbury itself, though it has become contiguous with the town. Leigh Park is a district developed since the late-1990s that is contiguous with Westbury Leigh, and incorporates a large medical centre, a community hall and a Tesco Express store. 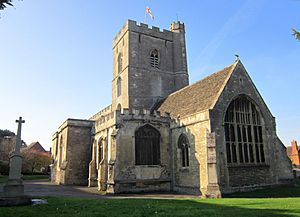 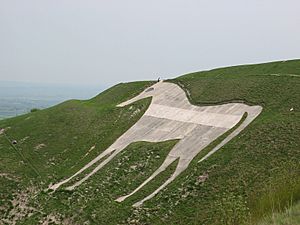 In the past, Westbury was sometimes known as Westbury-under-the-Plain to distinguish it from other towns of the same name. Westbury is nestled under the northwestern bluffs of Salisbury Plain, and it is there that the town's most famous feature can be seen: the Westbury White Horse. It is sometimes claimed locally that the White Horse was first cut into the chalk face as long ago as the year 878, to commemorate the victory of Alfred the Great over the Danes in the Battle of Eðandun (probably, but not certainly, at the nearby village of Edington). However, scholars believe this to be an invention of the late 18th century, and no evidence has yet been found for the existence of the horse before the 1720s. The form of the current White Horse dates from 1778, when it was restored. In the 1950s it was decided that the horse would be more easily maintained if it were set in concrete and painted white. The horse's original form may have been quite different from the horse seen today. One 18th-century engraving shows the horse facing to the right, but in its current form it faces to the left.

Westbury centres on its historic marketplace, with the churchyard of All Saints' Church (14th century) behind it. All Saints' has a heavy ring of bells, an Erasmus Bible, a 16th-century clock with no face constructed by a local blacksmith, and a marble bust of William Phipps by Robert Taylor. The west window of the church was donated by Abraham Laverton, who also built Prospect Square (1869) and the nearby Laverton Institute (1873), which he donated to a local charity, known today as "the Laverton".

In the early part of September 1877, there was found on Bremeridge Farm, in the parish of Dilton Marsh, Wilts, belonging to Charles Paul Phipps, esq. of Chalcot House, a hoard of 32 gold coins. They were found during repairs and improvements of the homestead, about a foot and a half below the surface, in the courtyard, piled, one above another, without any appearance of a purse or box.

Until the 1940s, the Westbury Sheep Fair was an important annual event.

The town has been home to the Army Officer Selection Board and the Cadet Force Commissioning Board, located at Leighton House, since 1949; its closure was announced in 2016.

A former Lafarge cement production plant lies about 1.3 miles (2.1 km) northeast of the town centre; production ceased in 2009 but the site remains in use as a distribution centre. From 1961 until its demolition in 2016, the plant's 400 feet (120 m) chimney was the tallest unsupported structure in southwestern England.

The Leighton sports field at Wellhead Lane was laid out as a cricket field by the mill-owning Lavertons. In 1890 W. G. Grace played in W. H. Laverton's XI against a team called the Australians. 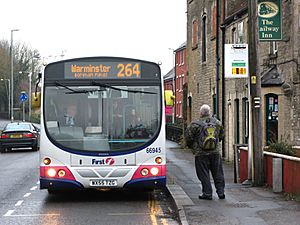 The A350 road passes through the town and a controversial Westbury Bypass was once proposed which would have reduced traffic in parts of the town but would have had a negative effect on the landscape on the east of the town. The eastern bypass scheme was eventually rejected after an Independent Planning Inquiry recommended against it in 2009. The town remains a bottleneck on the A350 route.

The town is an important junction point on the railway network, as it lies at the point where the Reading to Taunton line, formng a link from London Paddington to Penzance, intersects the Wessex Main Line, linking Bristol and Bath Spa to Salisbury and Southampton. Westbury railway station is on the west of the town.

Until the 1940s, the Westbury Hill Fair was an important annual event, mostly for the sale of sheep.

The company which became known as Blue Circle built a rail-served cement production plant a short distance northeast of the town in 1962; its two rotary kilns were for a short time the largest in the country. Chalk came from a quarry around 2 km away, and clay was dug from pits near the plant. From 1977 to 1992 part of the plant's fuel came from domestic refuse, and from 2000 tyres were burned. French company Lafarge took over Blue Circle in 2001, and cement production ended in 2009. Most of the site was demolished in 2016 but the cement silos remain in use as a distribution centre, owned since 2013 by Tarmac. From 1961 until its demolition in 2016, the plant's 400 feet (120 m) chimney was the tallest unsupported structure in southwestern England.

Businesses at the Brook Lane industrial area, northwest of the railway station, include an Arla creamery which makes Anchor butter. The West Wilts trading estate, in Heywood parish just northwest of Westbury, has Welton Bibby & Baron who claim to be the UK's largest manufacturer of paper bags and similar goods.

Westbury has one secondary school, two primary schools, a junior school and an infants school. The secondary school, Matravers School, has a sixth form offering a range of subjects. It serves Westbury and the surrounding villages including Chapmanslade, Bratton, Dilton Marsh and Edington.

Westbury Leigh C of E Primary School was moved from Westbury Leigh to the neighbouring Leigh Park estate. Bitham Brook Primary School mainly serves the western part of the town. Westbury C of E Junior School serves the central part of the town and takes children from Year 3 to Year 6. It is fed by Westbury Infant School, which takes children from Reception to Year 2.

All content from Kiddle encyclopedia articles (including the article images and facts) can be freely used under Attribution-ShareAlike license, unless stated otherwise. Cite this article:
Westbury, Wiltshire Facts for Kids. Kiddle Encyclopedia.