Warminster is a town and civil parish in western Wiltshire, England, by-passed by the A36 (between Salisbury and Bath) and the partly concurrent A350 between Westbury and Blandford Forum. It has a population of about 17,000. The River Were runs through the town and can be seen running through the middle of the town park. The Minster Church of St Denys sits on the River Were. The name Warminster first occurs in the early 10th century.

The main settlement at Warminster dates back to the Anglo-Saxon period, although there is evidence of pre-historic settlements at in the Warminster area, especially at the nearby Iron Age hill forts, Battlesbury Camp, Scratchbury Camp and Cley Hill. Two Roman Villas have also been discovered in the area, as have caches of Roman coins.

By the 10th century, Warminster included a royal manor and an Anglo-Saxon Minster, with the residents largely associated with the estate. The royal manor was passed to new lords in the 12th century, during which time the township started to grow. During the 13th century, a market was set up at Warminster, and by 1377 the town had 304 poll-tax payers, the tenth largest in Wiltshire.

The town's name has evolved over time, known as Worgemynstre in approximately 912 and it was referred to in the Domesday Book in 1086 as Guerminstre. The town name of Warminster is thought to derive from the River Were, a tributary of River Wylye which runs through the town, and from an Anglo-Saxon minster or monastery, which existed in the area of St Denys's Church. The river's name, "Were" may derive from the Old English "worian" to wander.

During the English Civil War, between 1642 and 1645, the town was the site of a few incidents. A major for the "Roundheads", Henry Wansey was besieged in Warminster, while a force under Edmund Ludlow entered a skirmish on Warminster Common whilst trying to relieve him. By 1646, the town had suffered £500 (equivalent to £64,842 in 2018) worth of damages by supporting the Roundheads.

The market at Warminster was the focus of the town's prosperity, with significant wool, clothing and malting trades established by the 16th century and continuing to be the economic backbone of the town until the 19th century. The market also included a significant corn trade throughout the period and was regarded as the second largest corn market in the west of England in 1830. Unlike many markets of the time where farmers would take sample to market, Warminster's corn market required a sack from each load of corn to be available to customers, that each purchase must be agreed between 11am and 1pm and paid for by the end of the day.

The town had a large amount of accommodation for visitors to the market, and in 1686 it was ranked fourth for number of places to stay in Wiltshire, with 116 beds. By 1710 there were approximately fifty inns and alehouses in the town. The town was an early adopter of the Turnpikes Act to improve the roads around the town. Unlike many roads improved at the time which would link to towns, Warminster chose to improve seven roads around the town, all under three miles long.

Despite the prosperity, one settlement of houses near Warminster Common had a poor reputation. William Daniell wrote in 1781 that people were living in unplastered hovels with earth floors and that piles of filth poisoned the stream bringing typhus and smallpox. The people were considered rude and drunk criminals. Daniell and members of the clergy were keen to help the residents, and by 1833 the area was considered clean and respectable.

The town was significantly redesigned in after 1807 when George Wansey, who was from a family of clothiers in Warminster, left £1,000 (equivalent to £63,090 in 2018) to improve the town, provided it could be matched by fundraising. The money was spent on demolishing houses to widen roads, allowing for new houses to be built. In 1851, a railway line from West

In 1907, a committee was put together to advertise the town, creating a town guide and advertising in national publications. Unfortunately the committee could not come to an agreement with Lord Bath over the location of a new hotel. Between 1937 and 1961, a military presences formed at Warminster, with the addition of camps, a permanent Barracks at Battlesbury, married quarters and workshops for vehicle repairs.

Warminster is located in south-west Wiltshire, near to the Somerset border. The town is surrounded by six hills, providing shelter and security for early settlers. The area is made up of chalk, which provides good drainage to the nearby River Wylye, providing plenty of arable and pasturable land near to the village. The Wylye is a tributary of the River Avon. Warminster is also close to Selwood Forest.

The Domesday survey of 1086 revealed 30 residents, largely craftsmen for the royal demesne, but the population had grown by 1377 to 304 poll-tax payers, the tenth largest village in Wiltshire. In 1665, the population had increased to 354 households, approximately 1,800 people. The area contained by the turnpike gates included 2,605 people in 1781.

Warminster has a number of local venues which facilitate cultural events for the community. This includes a library, museum, five theatres and cinemas, eleven halls and a number of pubs. There are many festivals and events held annually within the area including Warminster festival, Vintage bus run and heritage open days.

Warminster is twinned with Flers in France. 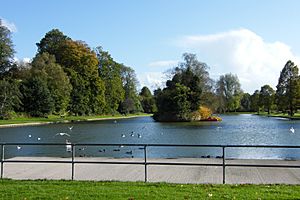 Close by to Warminster is stately home Longleat, which has included Longleat Safari Park since 1966; the first drive-through safari park outside Africa, home to over 500 animals, including giraffe, monkeys, rhino, lion, tigers and wolves. The town includes a theatre, the Warminster Athenaeum, an 1858 Grade II listed building. The Warminster Lake Pleasure Grounds were laid out in 1924 and facilities include tennis courts, play area and boating lake. They were officially opened by the Marquess of Bath on Saturday 26 July 1924.

The east of the town is situated along the A36 road and the Warminster service station is on the route. The Warminster railway station, opened in September 1851, is managed by Great Western Railway

All content from Kiddle encyclopedia articles (including the article images and facts) can be freely used under Attribution-ShareAlike license, unless stated otherwise. Cite this article:
Warminster Facts for Kids. Kiddle Encyclopedia.