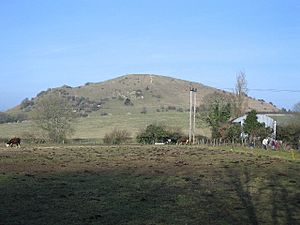 Cley Hill is a prominent hill to the west of Warminster in Wiltshire, England. Its summit has a commanding view of the Wiltshire / Somerset county boundary, at 244 metres (801 ft) elevation. The land is in Corsley parish and is owned by the National Trust.

A 26.6-hectare (66-acre) area of chalk grassland at Cley Hill was notified as a biological Site of Special Scientific Interest in 1975. The land is managed by the National Trust, having been gifted to the charity in 1954 by the 6th Marquess of Bath.

There is a legend that the hill was formed by the devil, when he dropped a sack of earth with which he had planned to bury the town of Devizes. He had retrieved the earth from Somerset and was travelling to Devizes when he stopped to ask an old man the distance to the town. The man replied that he had been walking for years to reach Devizes, so the devil abandoned his plan.

All content from Kiddle encyclopedia articles (including the article images and facts) can be freely used under Attribution-ShareAlike license, unless stated otherwise. Cite this article:
Cley Hill Facts for Kids. Kiddle Encyclopedia.