Battlesbury Camp is the site of an Iron Age bivallate hill fort on Battlesbury Hill near the town of Warminster in Wiltshire, South West England. Excavations and surveys at the site have uncovered various finds and archaeological evidence. 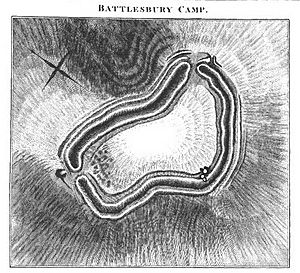 Pencil sketch of Battlesbury Camp, from The Ancient History of Wiltshire by Sir Richard Colt Hoare, 1810

Battlesbury occupies the summit of an irregular point of down, with its defences following the natural contours of the hill, and being by nature of the site almost inaccessible on the west and northeast sides. It has triple ditches and ramparts for the most part, with double on the southeast side. The site encloses 23.5 acres in all. There are entrances at the northwest and northwest corners.

Pits found within the fortifications contained late Iron Age pottery, the hub of a chariot wheel, an iron carpenter's saw, a latch-lifter for a hut door, querns, whetstones, sling stones, and animal bones. These all indicate a permanent occupation and date from the 1st century BC. Unfortunately it is suspected that the hills inhabitants came to a violent end, due to the many graves containing men, women and children outside of the northwest entrance. It can only be guessed at whether Roman legions put people to the sword, or if this was the result of intertribal warfare sometime before the Roman conquest.

The southwest area of the hill fort is apparently built over and around preceding Bronze Age burial mounds or tumuli. Part of the inner ditch is occupied by a large circular barrow, which was excavated, but was found empty. A few feet further to the west are two other barrows, over which the great inner rampart passes; these on opening, proved to be sepulchral: in the largest was found a cist containing burned human bones at the depth of two feet; and in the smallest, two skeletons were found, lying from south to north, the head of the smallest reclining on the breast of the other. On the breast of the largest skeleton there was a small ring or bead of stone, which was probably worn as an amulet.

Later excavations and surveys adjacent to Battlesbury Camp hill fort in 1998 have also uncovered late Bronze Age to middle Iron Age settlement activity including for ditches, roundhouses, four-post structures and numerous pits. Some of the pits contained human burials, and other deposits of artefacts and animal bones which appear to have been formally placed.

The site is at , to the east of the town of Warminster, in the county of Wiltshire. The hill has a summit of 208m AOD and is marked by an Ordnance Survey triangulation station. Nearby to the southeast lies the hill fort of Scratchbury Camp on Scratchbury hill. The site and surrounding downs are easily accessible by public footpath, however, care must be taken not to stray into the military firing ranges of Salisbury Plain immediately to the northeast.

All content from Kiddle encyclopedia articles (including the article images and facts) can be freely used under Attribution-ShareAlike license, unless stated otherwise. Cite this article:
Battlesbury Camp Facts for Kids. Kiddle Encyclopedia.