Windmill Hill was the site of a Bronze Age Beaker culture burial, and contemporary artefacts have been found on the Selwood Ridge.

Prior to the Norman Conquest Wincanton was frequently the scene of battles between the Britons, Danes and Saxons. During the reign of Edmund Ironside, the English, under his command, defeated the Danes, forcing them to leave England.

In the Domesday Book the name of the town was spelled as "Wincaleton", thought to mean "Pleasant town on the Cale". Cockroad Wood Castle, which is now in the parish of Charlton Musgrove, was a motte and bailey castle, probably built after the Norman conquest of England of 1066. The castle sits close to the contemporary Norman castles of Ballands and Castle Orchard, and may have been built as part of a system of fortifications to control the surrounding area. By 1086 the surrounding land was held by Walter of Douai, although no documentary evidence of the castle remains.

The parish of Wincanton was part of the Norton Ferris Hundred.

Wincanton was probably the site of a market in the medieval period but did not gain a market and fair charter until 1556.

The town was the scene of one of the few armed skirmishes in England during the Revolution of 1688. A troop of Horse Guards under Patrick Sarsfield, loyal to James II, defeated an advance party of troops fighting for William of Orange, on 20 November 1688. A great part of the town was destroyed by fires in the years 1707 and 1747.

In the early 19th century Wincanton was a depot for French officers, during the Napoleonic Wars.

By 2010 there had been an influx of foreign nationals, especially Portuguese and Polish citizens. 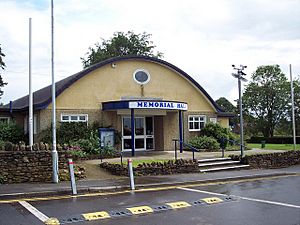 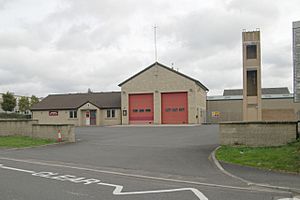 Wincanton Community Hospital in Dancing Lane was formerly known as Verrington Hospital and in March 2015 had 28 beds on two wards plus intermediate care unit. It opened as an Isolation Hospital in September 1910 for patients with Scarlet Fever.

The Balsam Centre is a Healthy Living Centre and also a Children's Centre for Wincanton and South East Somerset.

The (War) Memorial Hall, which opened on 9 January 1959, has a stage as well as facilities for dancing or for seating 250. It also has a separate committee room that can seat 50.

Fire, police and ambulance services are provided jointly with other authorities through the Devon and Somerset Fire and Rescue Service, Avon and Somerset Constabulary and the South Western Ambulance Service.

Wincanton is situated on the northeast edge of Blackmore Vale, 12 miles (19 km) northeast of Yeovil, and 10 miles (16 km) northwest of Shaftesbury on the extreme southeast of Somerset close to the borders of Dorset and Wiltshire.

Along with the rest of South West England, Wincanton has a temperate climate which is generally wetter and milder than the rest of the country. The annual mean temperature is about 10 °C (50 °F); due to the modifying effect of the sea the range is less than in most other parts of the UK. January is the coldest month with mean minimum temperatures between 1 °C (34 °F) and 2 °C (36 °F). July and August are the warmest months in the region with mean daily maxima around 21 °C (70 °F).

The southwest of England has a favoured location with respect to the Azores high pressure when it extends its influence northeastwards towards the UK, particularly in summer. Convective cloud often forms inland however, especially near hills, reducing the number of hours of sunshine. The average annual sunshine totals around 1,600 hours.

Rainfall tends to be associated with Atlantic depressions or with convection. The Atlantic depressions are more vigorous in autumn and winter and most of the rain which falls in those seasons in the southwest is from this source. Average rainfall is about 725 millimetres (28.5 in). November to March have the highest mean wind speeds, with June to August having the lightest winds. The predominant wind direction is from the southwest.

The Dogs (also called The Old House) was built around 1650, and was reshaped internally by Nathaniel Ireson in 1740-50. It is a grade I listed building.

The town had a railway station on the Somerset and Dorset Joint Railway but this closed on 7 March 1966.

The town is north of the A303 road, one of the main routes between London and South West England.

The nearest railway station is in neighbouring Gillingham, Dorset. Trains run on the Exeter to Waterloo line. 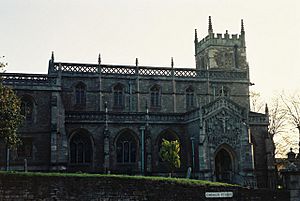 The Church of St Peter and St Paul was almost totally rebuilt in 1887-91 by J. D. Sedding; however, parts of the tower may be remnants of an earlier church, dating from 1313, on the same site. In 1793 the tower was raised by 12 feet (4 m) making it 50 feet (15 m) high; five bells were cast and a sixth added. The additional carving and north porch were added in subsequent years. The churchyard includes a self-designed monument to the local architect Nathaniel Ireson who died in 1796. Because of the state of the roofs, which are under repair, the church is included on the Heritage at Risk register.

The Roman Catholic Church and Presbytery of St Luke and St Teresa was built in 1881 by the priest/architect A.J.C Scoles.

There are also places of worship for Pentecostals, Methodists, Baptists and Quakers in the town.

Wincanton Museum is a small local museum in the High Street which closed in 2010.

The cartoonist Tony Weare was born in Wincanton. 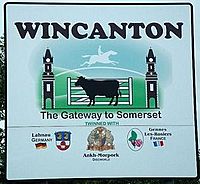 Wincanton is unusual in that it was twinned in 2002 with a town which can only be found in fiction. As well as with Gennes / Les Rosiers in France and Lahnau in Germany, Wincanton is twinned with Ankh-Morpork, a fictional city state near the Circle Sea on Terry Pratchett's Discworld. On 5 April 2009, a number of roads were retitled with names taken from Ankh-Morpork, such as Peach Pie Street and Treacle Mine Road, after a short-list was voted upon by fans. There are shops in the town selling Discworld-related goods. In 2015 the Uncle Tom's Cabin pub unveiled a sign by Discworld illustrator Richard Kingston referencing The Mended Drum. Pratchett and Kingston were regulars.

In the late 1890s the West Surrey Central Dairy Company purchased a local creamery. In 1908, after developing a dried milk baby powder, it changed its name to Cow & Gate. The creamery and dairy products factory had its own sidings from the Somerset and Dorset Joint Railway station, providing access for milk trains.

In order to cope with the transport problems across its quickly expanding creamery, milk bottling and doorstep delivery network, Cow & Gate formed a dedicated logistics arm in 1920. Spun out in 2002 from successor company Unigate, Wincanton PLC is the UK's second largest logistics company. The company still has a dairy products base in the town, although its head office function moved to Chippenham, Wiltshire in 2005.

In 1999, Unigate sold its remaining dairies to Dairy Crest, which still has a creamery and milk processing plant in the town, but has sold the cheese business to Adams Foods Ltd., producer of the Pilgrim's Choice brand of Cheddar cheese, in 2010 the second best selling brand in the UK.

Several award-winning businesses are located in Wincanton, such as Coffee Sense Coffee Roasters who won a Guild of Fine Food Great Taste Award Winner in 2017 and Boxclever Press Ltd who gained Royal recognition in 2019 when they were awarded a Queen's Award for Enterprise in the International Trade category

Primary education up to the age of 11 is offered by Wincanton Primary School and Our Lady of Mount Carmel Catholic Primary School. The history of Wincanton Primary began in 1833 when an appeal was launched to provide a National school in Wincanton and after a number of difficulties the school was built in North Street in 1838, although this had very few pupils. A school board was formed in 1871 and opened a school in the former National school buildings with over 200 pupils. In 1875 there were 206 children attending. In 1894 the board raised money for a new school to accommodate 445 children, which opened in South Street in 1897.

The Balsam Centre is a Healthy Living Centre and also a Children's Centre. Since 2005 it has received grants for the re-fitting of the training kitchen and construction and refurbishment to create a dedicated teaching area, counselling and interview rooms and a studio space for physical and community activities. 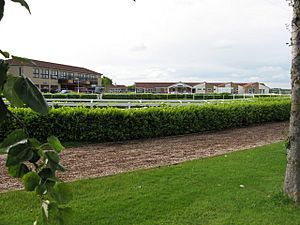 The town gives its name to Wincanton Racecourse which is in the neighbouring parish of Charlton Musgrove.

Wincanton Sports Centre was opened in 2001, funded by a National Lottery grant.

The cricket club, which plays in the recreation ground, has two Saturday teams and a Sunday team.

The rugby union club plays at King Arthur's Community School in the town. In 2010 they won the Dorset & Wilts division of the English Rugby Union South West Division.

Wincanton Cycling Club was founded in and regularly carries out group rides.

The Wrong Way Back (TWWB) is a charity cycle event first held in 2010. The event starts and finishes in Wincanton and takes the riders 8 days to complete the 561-mile route.

All content from Kiddle encyclopedia articles (including the article images and facts) can be freely used under Attribution-ShareAlike license, unless stated otherwise. Cite this article:
Wincanton Facts for Kids. Kiddle Encyclopedia.