Lake Success is a village in the Town of North Hempstead in Nassau County, on the North Shore of Long Island, in New York, United States. The population was 2,897 at the 2010 census.

The Incorporated Village of Lake Success was the temporary home of the United Nations from 1946 to 1951, occupying the headquarters of the Sperry Gyroscope Company on Marcus Avenue. It was the home of Canon U.S.A., Inc. Canon U.S.A. has since moved (as of late 2013) its corporate headquarters to Melville, New York (in neighboring Suffolk County). 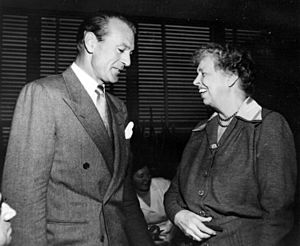 Gary Cooper and Eleanor Roosevelt at the temporary UN headquarters in Lake Success, 1950

Lake Success derives its name from a kettle lake of the same name which according to village lore had a Native American name of "Sucut." William K. Vanderbilt II bought land around the lake in the early 20th Century for a home. The village was incorporated in 1926.

In 1939, the United States government bought a large tract between Marcus Avenue, Lakeville Road and Union Turnpike, to be the home to the Sperry Gyroscope Company which built a variety of maritime, military, aerospace and navigation products. During World War II the plant had 22,000 employees. After the war, part of the plant became the temporary headquarters of the United Nations from 1947 to 1952, while its headquarters building in New York City was being built. The 1,500,000-square-foot (140,000 m2) facility continued to be used by various companies (including Unisys and Loral Corporation) to build defense products over ensuing decades. When it was purchased by Lockheed Martin in the late 1990s, the company closed the plant and began an environmental clean-up of the site. In 2000 National RE/sources acquired the 94-acre (380,000 m2) campus from Lockheed and converted it to a multi-tenant office park called i.park.

Most of the village is part of the Great Neck School District, and Great Neck South High School is located within the village limits. Lake Success is the city of license for popular regional dance/Hot Adult Contemporary radio station WKTU, although the station is based in Manhattan along with other Clear Channel stations.

It borders the Little Neck neighborhood in the New York City borough of Queens.

There were 798 households, out of which 35.3% had children under the age of 18 living with them, 77.9% were married couples living together, 5.4% had a female householder with no husband present, and 14.4% were non-families. 12.4% of all households were made up of individuals, and 9.9% had someone living alone who was 65 years of age or older. The average household size was 2.86 and the average family size was 3.11.

Sumitomo Corporation operates its Lake Success Shared Services Center in Suite 220 at 1999 Marcus Avenue in an area in the Town of North Hempstead, south of Lake Success. Companies based in Lake Success include Broadridge Financial Solutions, Hain Celestial Group, and Dealertrack.

The Long Island Expressway and the Northern State Parkway pass through Lake Success.

Additionally, the former Long Island Motor Parkway once passed through the village.

National Grid USA provides natural gas to homes and businesses that are hooked up to natural gas lines in Lake Success.

PSEG Long Island provides power to all homes and businesses within Lake Success.

Lake Success is sewered. The southern part of Lake Success is within the Nassau County Sewage District. The other portions of Lake Success are connected to the village's sanitary sewer network, which flows into and is treated by the Belgrave Sewer District under a contract.

Lake Success is located within the boundaries of the Manhasset–Lakeville Water District, which provides the entirety of the village with water.

All content from Kiddle encyclopedia articles (including the article images and facts) can be freely used under Attribution-ShareAlike license, unless stated otherwise. Cite this article:
Lake Success, New York Facts for Kids. Kiddle Encyclopedia.