Rocky Point is a hamlet and census-designated place (CDP) in the town of Brookhaven, New York, United States. As of the 2010 United States census, the CDP population was 14,014.

Rocky Point is home to the site where American radio company RCA once operated a very large transmitting and transmitter research facility, known as Radio Central. RCA began to transmit transatlantic radio messages from Radio Central after its opening on November 5, 1921. Early Radio Central transmissions were received by many European nations, including Britain, Spain, France, Germany, Italy, Austria, and Poland. 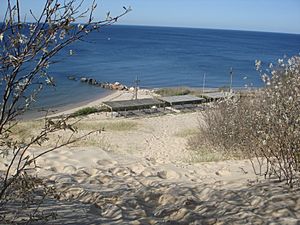 On January 7, 1927, AT&T initiated the first transatlantic commercial telephone service, linking London and New York. AT&T's transmitter was at Radio Central, and their receiver was in Houlton, Maine. The radiotelephone signal from Radio Central was received by the British General Post Office's receiver facility in Cupar, Scotland.

Radio Central was one of the many original operating and touring sites of Guglielmo Marconi's radio shack, which now is displayed at Rocky Point's Frank J. Carasiti Elementary School.

The 5,200-acre (21 km2) Rocky Point site was decommissioned and demolished in the 1970s. It now consists of many concrete ruins and downed telephone poles and radio towers, owned by the New York State Department of Environmental Conservation. It is part of the Rocky Point Natural Resources Management Area, which is in the Long Island Central Pine Barrens. The site gives an interesting insight into the 1920s, because—being in the middle of the forest—the footprints of the site remain largely untouched since its operational period. The western terminus of the 125-mile-long (201 km) Paumanok Path hiking trail is in the forest, with the eastern terminus at the Montauk Point Light.

Rocky Point, along with neighboring village Shoreham, was also the home to inventor and scientist Nikola Tesla's early research facilities. Rocky Point is the home of the only paragliding site (as designated by the USHPA) on Long Island.

The community is on the North Shore of Long Island. According to the United States Census Bureau, the CDP has a total area of 11.3 square miles (29.3 km2), all land.

There were 4,820 households, out of which 42.7% had children under the age of 18 living with them, 57.9% were headed by married couples living together, 11.8% had a female householder with no husband present, and 25.0% were non-families. 19.6% of all households were made up of individuals, and 5.7% were someone living alone who was 65 years of age or older. The average household size was 2.89, and the average family size was 3.34.

All content from Kiddle encyclopedia articles (including the article images and facts) can be freely used under Attribution-ShareAlike license, unless stated otherwise. Cite this article:
Rocky Point, New York Facts for Kids. Kiddle Encyclopedia.